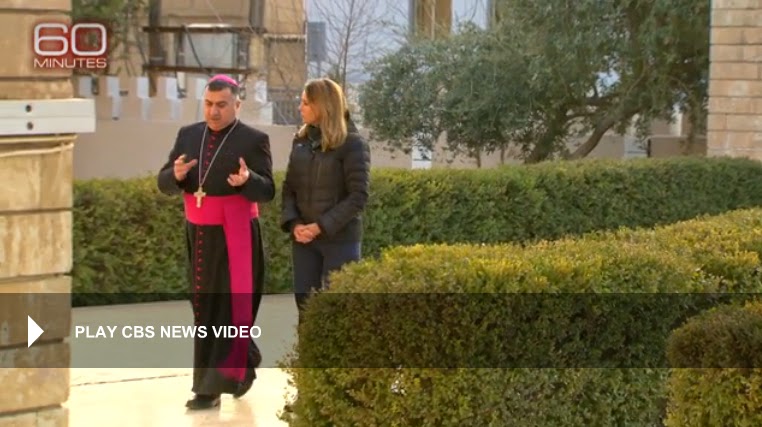 This sounds like it will be a significant contribution to our understanding of the situation in Iraq and Syria. Lara Logan will be interviewing two archbishops, one of the last monks from an abandoned 1,600 year old monastery, and other refugees in her on the ground reporting from Iraq.


Archbishop Bashar Warda of Erbil says waging war against ISIS fighters is the only way to save the Christian Church in Iraq. Calling ISIS a "cancer" he says, "So sometimes you take some hard measures, unfortunate measures, to deal and treat this cancer."

Archbishop Nicodemus Sharaf of the Syriac Orthodox Church in Mosul... says Christianity is indomitable. "They take everything from us, but they cannot take the God from our hearts, they cannot."


Scroll down for preview of story from CBS News. I could not get the embed function to work properly for the video preview, so click here to view the video promo.

Bishop: Make War on ISIS
An Iraqi bishop says waging war against ISIS fighters is the only way to save the Christian Church in Iraq

The leader of one of Christianity's oldest communities reluctantly says that waging war against ISIS - killing their fighters - is the only way to stop the radical Islamists from destroying Christianity in Iraq. Archbishop Bashar Warda of Erbil speaks to Lara Logan for her report on the plight of thousands of Christians forced to flee ancestral homes from ISIS. Her story will be broadcast on 60 Minutes Sunday, March 22 AT 7 p.m. ET/PT.

The situation with ISIS in Northern Iraq is a dire one for Christians, says Archbishop Warda. "For me, Daesh is a cancer," says the Chaldean Catholic prelate referring to ISIS by its Arabic name. "So sometimes you take some hard measures, unfortunate measures, to deal and treat this cancer," he says. The bishop has seen his flock expand by about 60,000 people in recent months because of an influx of Christian refugees who fled Mosul and the surrounding villages on the Nineveh Plains when ISIS stormed the area last summer. Should the military defeat them, asks Logan. "Please God," replies the archbishop.

Logan speaks to an Iraqi refugee who was given a choice by ISIS to convert to Islam or be killed. He agreed to convert - and his entire family was forced to do the same. But about a month later, ISIS members came to their door and advised them that under their interpretation of Islamic law, 10-year-old girls, like their daughter, should be married. "As soon as they left, my wife and I shut the door. We looked at each other and she started to cry -- and pray." They managed to escape to Erbil by taxi, swearing that they were Muslims at each ISIS checkpoint.

Erbil, in Iraq's Kurdish-controlled North, the capital of what's referred to as Kurdistan, offers a sanctuary for many fleeing Christians. There, the Kurdish Peshmerga fighters offer a bulwark against ISIS. In all, it is believed some 200,000 Christians have been displaced by ISIS. Logan finds an entire Christian village empty.

Father Yusuuf Ibrahim was one of the last monks in a 1,600-year-old monastery, where prayers and services were still said in Aramaic, the language spoken by Jesus. He fled to Erbil; he is not optimistic about the future of Christians in the area. "We don't know exactly but we are expecting the worse," he tells Logan. Just a few miles from the monastery is the frontline, where the flag of ISIS can be seen flying in the distance. Every town and village between that frontline and Mosul is in the Islamic State's hands, Logan reports. And now, she adds, "for the first time in nearly 2,000 years, it is believed that the city of Mosul has no Christians left in it."

Nicodemus Sharaf is the archbishop of the Syriac Orthodox Church in Mosul. He just made it out of the city with five ancient texts, but had to leave behind hundreds more, many precious relics of early Christianity. "I think they burn all the books. And we have books from the first century of the Christianity," he says, beginning to cry and telling Logan it's the first time since the birth of Christianity in Iraq that Christians can't pray in their churches. But the archbishop says Christianity is indomitable. "They take everything from us, but they cannot take the God from our hearts, they cannot."