“How Can Any Man With Good Sense” Overlook the Koran’s Violence? 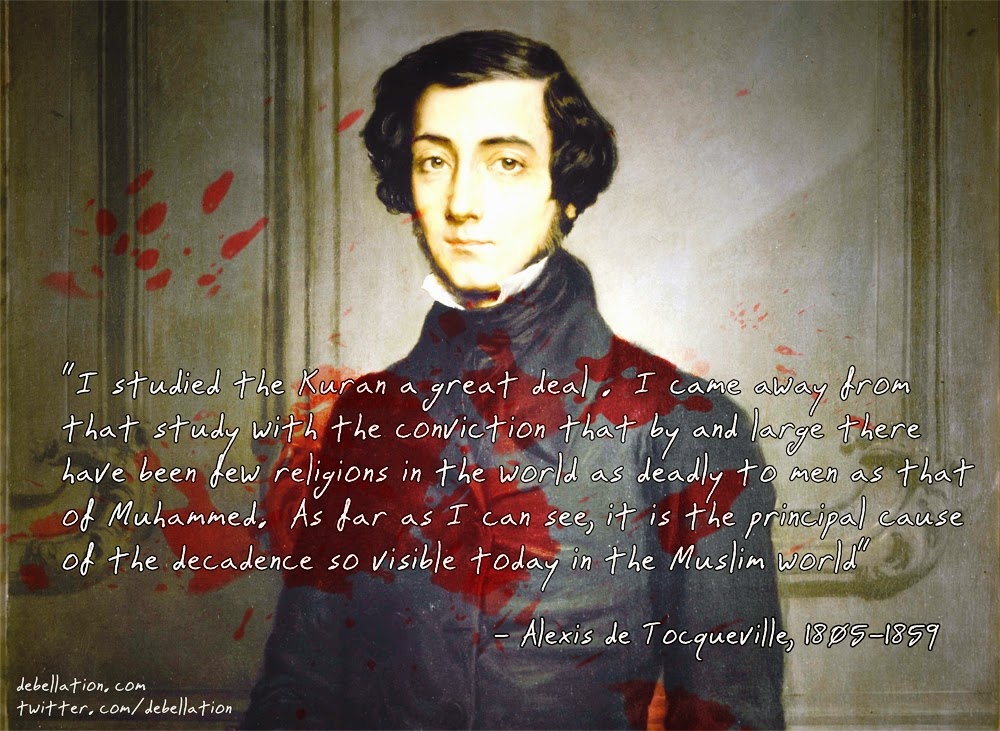 
Bruce Thornton writes another great article today titled “Western Sleepwalkers and the Paris Massacre.” He points out the utter lack of common sense in Western responses to repeated jihadi attacks, which are repeatedly portrayed as aberrations by Western media and leaders.  Towards the end he writes, “Our ancestors for centuries acknowledged the true nature of Islam, a simple fact proven by 1000 years of Muslim aggression.” He then quotes Alexis de Tocqueville, “one of our most brilliant political philosophers,” who wrote the following in 1838:

Jihad, Holy war, is an obligation for all believers. … The state of war is the natural state with regard to infidels … [T]hese doctrines of which the practical outcome is obvious are found on every page and in almost every word of the Koran … The violent tendencies of the Koran are so striking that I cannot understand how any man with good sense could miss them (emphasis added).

Even Egypt’s Muslim president recently said that the Islamic “corpus of texts and ideas that we have sacralized over the centuries” are terrorizing the entire world.

The fact is, centuries before the current excuses used to rationalize away Islamic violence ever even existed — colonialism, Israel, cartoons, “Orientalism” — Islam was behaving violently toward the “infidel.”  Concludes Thornton:

Our leaders today have slipped into delusional dreams, in which people like Tocqueville or Winston Churchill––who in 1897 said, “Civilization is face to face with militant Mohammedanism”––are dismissed as ignorant bigots and racists who lack our superior knowledge and morality. Meanwhile, the bodies of jihadism’s victims continue to pile up, and Iran’s genocidal theocracy closes in on a nuclear weapon. And many in the West continue to sleepwalk through it all.