Testimony of a Child Martyr in Syria: 'I'm Gonna Tell God Everything'

This short essay by Metropolitan Hierotheos of Nafpaktos comes as it were from the Other World, and is a devastating indictment of not only those who killed this innocent little boy and so many thousands of innocents, only three years old — think of it! — but of those foreign governments (primarily the United States and Britain) who aid and arm the Muslim jihadists committing genocide and religious cleansing of Christians, and shamefully ignore the pleas of the Christians to stop aiding these murderers. And it is an indictment of us, who live in comfort here but cower in silence for fear of being branded as 'Islamophobes' or 'intolerant'.

It is also a reminder to those Christians who have become infected with the virus of Islam that there is no such thing as a Christian 'jihadist'.


Met. Hierotheos quotes to us the Apocalypse: "How long, Sovereign Lord, holy and true, until You judge the inhabitants of the earth and avenge our blood?" (Rev. 6:10).

Christians do not shed the blood of others, but like Jesus, the Lamb of God, we are to allow our blood to be shed, leave vengeance to the Lord, and entrust our souls to Him Who knows all things. 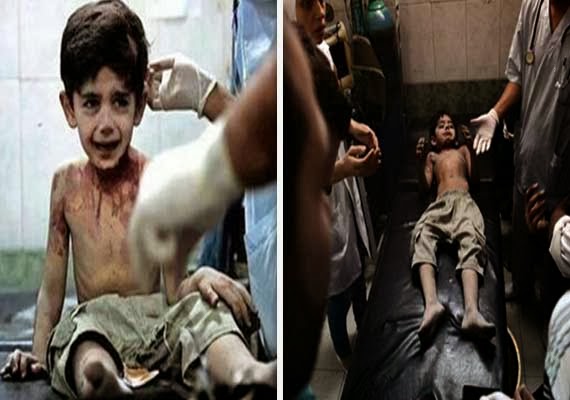 Christ had great communication with children; He loved them, hugged them and encouraged His disciples to let them come near Him, teaching His listeners to become like children in order to be saved. He also worked many miracles for them, among other things. He saw in children the purity of their hearts, their immaculate sensitivity, the sincerity of their words, their search for truth, the manifestation of their love.

And they reciprocated this love to Christ, so that when He entered Jerusalem they cheered Him in the Temple, crying: "Hosanna to the son of David!" And to the indignation of the high priests and scribes Christ recalled the Psalm: "Out of the mouth of infants and nursing babies you have prepared praise" (Matt. 21:16).

These things I remembered when I read online the words of a three-year-old child from Syria shortly before he died. He was fatally injured and a few minutes before his last breath he said with tears in his eyes, in the hospital where they cared for him: "I will testify all of you to God ... I will tell Him everything ...."

What awesome, true and frank words! It breaks hearts, it is a whipping against our cruel and callous society. He lived only three years on the earth, which God created to be "very good", and he felt it to be inhospitable. The earth is not to blame, inanimate nature, but man, who rebelled against God and infects it constantly. This child did not have time to rejoice in the creation of God, to create something in this world from which he came.

Truly, how soon did he see the hatred and evil of man? Unfortunately, in the short period of his life he witnessed the great passions of man concentrated, which take no account of anything and destroy everything. One moment is enough to know the eternal love of God and the eternal hatred of the evil one, through his instruments.

And as soon as this little child died, of course he testified everyone to God, their names and addresses, for the devastation they wreaked. And he told God everything about how much pain he went through in his short life, the pain of his body and soul. And the sighs of this small child united with the sighs of all those who suffer unjustly, as the Apocalypse says: "How long, Sovereign Lord, holy and true, until You judge the inhabitants of the earth and avenge our blood?" (Rev. 6:10).

My child, "testify" them, reveal all of them to God, those who infect over all His creation, say it all to God. Otherwise, he knows their plans, the methods they use to implement them, and the crimes they carry. But you also tell Him, because He loves children and receives their pain.

If we listened to the hurting voice of this three-year-old child in Syria, as well as all the other children who are abused, tortured, raped and killed, we would be better people. One day, however, all will be revealed and we will understand that God knew about everything, and he listened to the pain of those who suffered unjustly, and the children in pain.