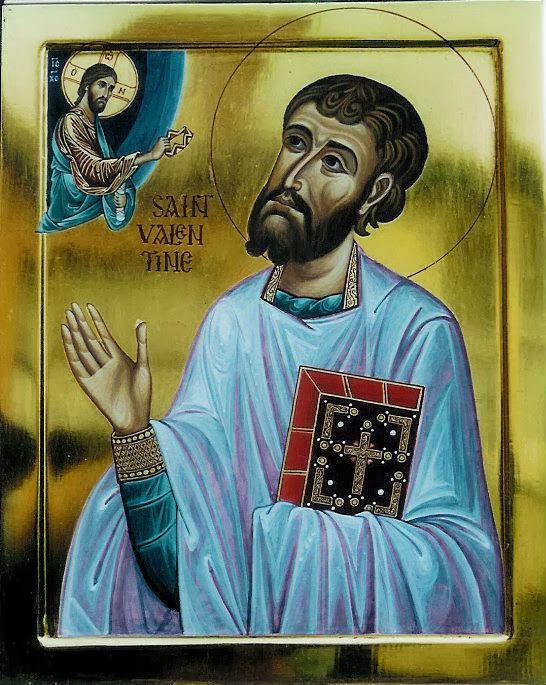 I hope you had a 'nice' Valentine's Day. It's somewhat of a faux, 'Hallmark' holiday now really, but such is the culture.

But there is a real Saint Valentinus behind this celebration, who was martyred during the second century. For a good article discussing the Orthodox Christian tradition of St Valentinus' life and feast, and the Orthodox perspective on today's transmogrified secular feast surrounding it, see here.

Suffice to say that traditional Orthodox countries are resisting the over-romanticized, sometimes overtly sexualized, commercialization of St Valentinus' feast. However, the Orthodox critique of Western culture is always sober, theological, and pastoral.


Actually, the rally was against that formidable manifestation of jahiliyya, ignorance, and “Islamophobia” known as Valentine’s Day. At least these Islamic supremacists in Gaza did not turn violent, as the anti-Valentine’s Day morality enforcers did in Pakistan... 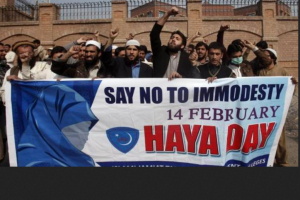 Pakistan: Devout Muslim students stone other students for celebrating Valentine’s Day, fire on police, set hostel ablaze
Feb 14, 2014 | Robert Spencer
Islamic supremacists don’t just want to bypass and denigrate Valentine’s Day. They want you to do so also, and if you don’t, the stones and bullets will start flying. Here again we see that morality in Islamic culture is not so much a matter of virtue freely chosen, but of people living in terror of committing a transgression that could get them killed...


Kashmir: Valentine’s Day “anti-Islamic and Muslims are not allowed to celebrate the day”
Feb 14, 2014 | Robert Spencer
Here again, when have you ever seen this kind of indignation, this resoluteness to resist, directed by peaceful Muslims against jihad terrorists? Self-proclaimed moderate Muslim spokesmen spend all their time explaining to Infidels how Islam teaches peace and tolerance, and how only greasy Islamophobes teach otherwise. There are no significant Muslim efforts to dissuade Muslims who think jihad involves violence and the subjugation of unbelievers that their understanding of Islam is wrong on Islamic grounds. But Valentine’s Day? They’re all over that!

Uzbekistan: Muslim clerics preach against Valentine’s Day at Friday prayers
Feb 14, 2014 | Robert Spencer
Saudi Arabia, Malaysia, Indonesia, and now Uzbekistan. That isn’t all, either. Muslim clerics around the world are railing against Valentine’s Day. Imagine if they expended even a fraction of this energy fighting against the jihadist understanding of Islam, which they ostensibly reject. But no: hijacking Islam is fine. Chocolate hearts for your sweetheart — that’ll send you to hell...

Saudi Arabia: Religious police ban Valentine’s Day
Feb 14, 2014 | Robert Spencer
Yet there are all sorts of people in Saudi Arabia who take this occasion to express their love for one another, thereby showing that the human heart and the human soul cannot ultimately be contained by a restrictive and repressive ideology that declares so much of ordinary human affection and interaction out of bounds and sinful. This is a sign of hope in a larger sense, like the blades of grass poking through the concrete that Solzhenitsyn noticed even in the darkest days of living under the Soviet boot...

Indonesia: “Celebrating Valentine’s Day is against Islam”; restraining order issued against celebrating it
Feb 14, 2014 | Robert Spencer
In Indonesia as well as in neighboring Malaysia, Islamic authorities are up in arms (so to speak!) against a great evil: the twisting and hijacking of their religion of peace by pseudo-Muslim criminals who claim that jihad has something to do with violence — no, wait…Scratch that. That doesn’t seem to upset them at all, oddly enough. They have instead reserved their ire for Valentine’s Day...

Malaysian Islamic Development Department: Valentine’s Day leads to “alcohol, abortion and baby-dumping”
Feb 14, 2014 | Robert Spencer
I know it does in my house, but I wasn’t aware that it was a worldwide phenomenon. Seriously, though, step back for a minute and think about this: in modern, moderate Malaysia, the Malaysian Islamic Development Department, which distributes official Friday sermon texts to the nation’s mosques, is not railing against jihad terrorism, which is supposed to be a twisting and hijacking of Islam’s true, peaceful teachings, but against Valentine’s Day. Apparently giving your beloved flowers and candy is worse than strapping on a bomb and blowing yourself up in a crowd of Infidels...