It Is Time To Speak

Matushka Constantina over at Lessons from a Monastery posted this image and word: 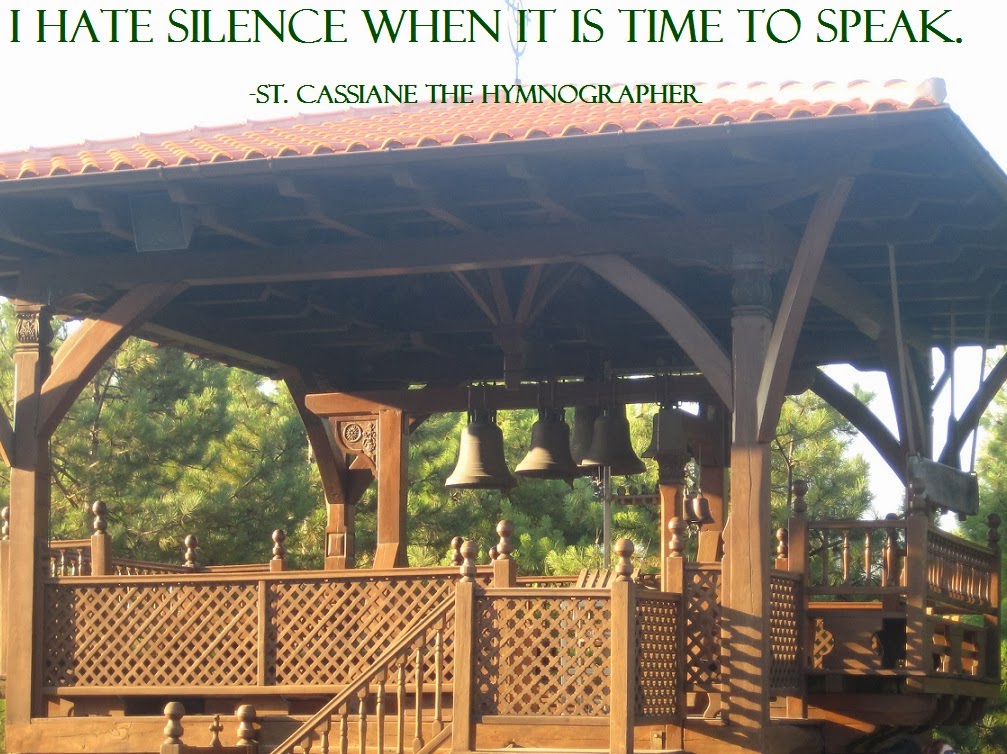 In reply to a question concerning the meaning of this statement, Matushka Constantina writes:

I can’t speak directly for what St. Cassiane meant by this because I don’t remember the context in which she said it (I made the image a long time ago). However, there are many times throughout the history of the Church (and even today) when saints stood up and spoke instead of keeping silent. The martyrs who publicly declared their faith in Christ and were put to death could have remained silent when asked if they were Christians but instead of silence they spoke. Similarly, St. Maximos the Confessor spoke out against a prevalent heresy of his times when he could have remained silent and had his tongue cut out. But perhaps the greatest example of “speaking” instead of keeping silent is the holy Forerunner and Baptist John, who spoke out against the sinful lifestyle of Herod when he could have kept silent.

Saint John Chrysostom says that those who blaspheme should fear even their shadows lest it actually be a Christian overhearing them and land a blow for their blasphemous words. This may be more than “speaking” but nevertheless it illustrates the point that we need to hold our faith so seriously that we speak up when someone is doing or saying false/wrong things so that we will not be condemned by our choice of silence on the Day of Judgement.

I might suggest that for at least some of us, it is 'Time to Speak' concerning the persecution of our Christian brothers and sisters in Syria, Egypt, and throughout the Islamic world. Just as St Nikodemos the Hagiorite collected and published the stories of Holy NeoMartyrs under the Ottoman yoke to strengthen the faithful, and as various collections of lives of the Russian New Martyrs under the militant atheists continue to be published, so we must now spread the accounts of the Holy New Martyrs of the 21st Century.


Brothers and Sisters, it is 'Time to Speak', not only for the sake of our Christian brethren being persecuted and slaughtered by Muslims, that we might encourage them to stand firm in the Faith and help alleviate their sufferings, but also for the sake of our souls, that we might be ranked with the saints who did not love their lives or their silence, but spoke against injustice, heresy and the lies of the devil.