Saint Philothei the Martyr, Consoler of Christians under the Yoke of Islam (Feb 19)

Here we are presented with another great saint of the Orthodox Church, who humbly but bravely labored in charity and mercy, strengthening the faithful against the predatory Muslims. St. Philothei shines like a female Kosmas of Aitolia, a teacher and encourager of the Church during the dark time of the Ottoman tyranny. She was martyred by the Turkish Muslims due to their hatred of the light of Christ which shone from her upon all. 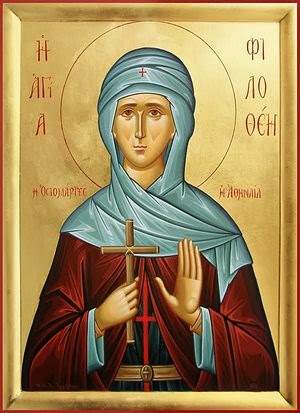 "Philothei aimed at protecting the daughters of Athens from the disgrace of conversion to Islam... strengthening those under duress or sending them away and hiding them. This was done until their consciences recovered or the danger subsided; and until fear was replaced by a spirit of faith and sacrifice for the sake of the Christian Faith."

The Philanthropy of Saint Philothei the Athenian
Mystagogy — Feb 19, 2014
More icons and photos at Mystagogy. 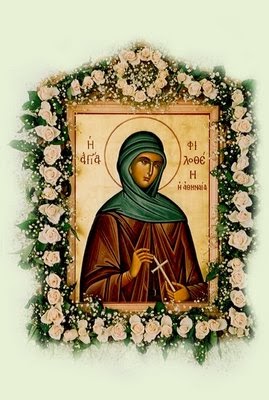 Saint Philothei was born in Athens in 1522 to an illustrious family. Against her will, she was married to a man who proved to be most cruel. When he died three years later, the Saint took up the monastic life and established a convent, in which she became a true mother to her disciples. Many women enslaved and abused by the Muslim Turks also ran to her for refuge. Because of this, the Turkish rulers became enraged and came to her convent, dragged her by force out of the church, and beat her cruelly. After a few days, she reposed, giving thanks to God for all things. This came to pass in the year 1589. She was renowned for her almsgiving, and with Saints Hierotheus and Dionysius the Areopagite is considered a patron of the city of Athens.

From a Greek biography of the Saint:

In addition to her dedication to a virtuous life, practicing philanthropy by offering protection, giving alms and ministering to the poor and sick, providing Christian education by teaching everyone ecclesiastical letters and liturgical knowledge, the holy woman contributed the following:

First, she founded schools for the children of the Athenians, to open their eyes to the tradition and renown of their ancestors. 'Lay hold of instruction, lest at any time the Lord be angry' (Ps. 2:12). Philothei brought this scriptural quotation to reality. Within her flickered the hope of the rebirth of the Byzantine Empire and...the early deliverance from the bestial yoke of the conquerors.

Second, Philothei aimed at protecting the daughters of Athens from the disgrace of conversion to Islam.... The danger of being subjected to conversion existed not only for the noble daughters who were forcibly abducted by the Turks because of their beauty and grace, but also for the simple ones, the peasant girls, who were forced to work in Turkish homes and farms in order to sustain themselves. Pressure, necessity and ignorance (the great deceiver) were causes in forcing the maidens into submission.

However, Philothei, with her convent of virgins (Παρθενώνα), her schools, her convent's metochia, and family ties, was capable of either strengthening those under duress or sending them away and hiding them. This was done until their consciences recovered or the danger subsided; and until fear was replaced by a spirit of faith and sacrifice for the sake of the Christian Faith.

N.B. Tomadakis, The Life and Service of Saint Philothei, University of Athens.

Apolytikion in the Plagal of the First Tone

The famed city of Athens doth honour Philothei, the righteous Martyr, whose relics it now revereth with joy; for while living in sobriety and holiness, she hath exchanged all earthly things for the everlasting life through great contests as a Martyr; and she entreateth the Saviour to grant His mercy unto all of us.

Kontakion in the Third Tone

We all honour Philothei with jubilation of spirit, as this day we rev'rently worship her ven'rable relics. For she lived her whole life working kindness and mercy; and the righteous one, receiving a martyr's ending, is deemed worthy to entreat God that all be granted eternal life with the Saints. 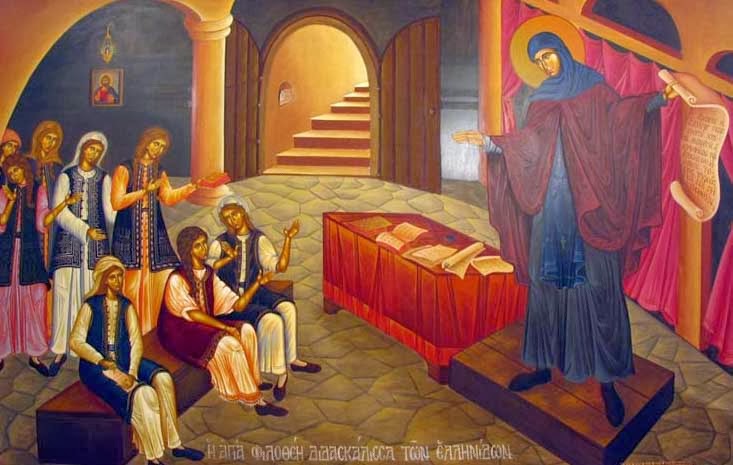 Philothei was born in 1550 Athens into a very affluent family.  Her family was loving and caring as well as patient, and she was married to a young man and widowed before she was even sixteen. After returning to live with her parents, she took on an active position in the family as well as the church and city. She was only content when she was helping others, and this peace of mind drew her closer to God and the Church. Her family’s wealth assisted in her charitable work, and before she had reached adulthood she had earned the love and respect of the community.

After her family had passed away, Philothei became the sole owner of extensive wealth, but desiring to become a nun, she assigned control of her belongings to the care of others in order to move to an Orthodox convent. In the meantime her money continued helping the poor and also funded the building of several churches and nunneries in and around Athens. At her own convent, Philothei transferred the nuns’ interests from passive to active. She taught them to supplement their worship and devotions with crafts that could benefit the Church community. Her work set the example for the handiwork that has been the trademark of nunneries for years.

During this time in history, Turkish Moslems were holding Greece hostage, challenging Christianity. However, they became frustrated because their attempts at conversion were unsuccessful. They had hoped the mere pressure of their presence would lead to the gradual replacement of Christianity by their own Moslem faith. Eventually the Turks endeavored to discredit the many faithful Christian leaders in Athens, but this was also unsuccessful. Philothei and other spiritual leaders only gained stronger resolve and greater devotion to God.

When it became apparent that Islam could not reach the hearts of the Christian Athenians, the Turks deliberately chose Philothei as a target, not only because of her open defiance but because they considered her sex to be a weakness and hoped she would succumb to surrender more easily. However, she remained a faithful and strong guide for the Athenians. Enraged, the Turks began a brutal course of terrorism.

During a service in Saint Andrew church, one of the beautiful chapels erected by her magnanimity, Philothei and some of her friends were attacked. The women were brutally beaten with clubs and stones, then dragged into the street to be murdered in front of the devastated townspeople. Philothei was carried out alive from this barbaric scene, but yielded to her wounds and gave up the spirit on February 19th, 1589.

Several miracles have been attributed to the Holy Martyr Philothei, mostly at the Cathedral in Athens and the Saint Andrew Church, still standing today and where her relics are enshrined. The many churches and nunneries she funded are still evident, and many organizations of women are named to honor this Athenian Saint.