"Dozens of people spoke out... against a homework assignment made at an Elgin-area U46 school in which it was asserted Christian, Muslim and Jewish faiths all believe in the same God..."

"Several people attacked the assignment, quoting Bible and Quran verses to support their argument that Christians do not follow the same God as Muslims." 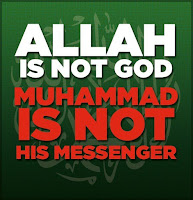 Bravo for these informed and motivated Christian parents and citizens, who are not afraid to speak truth to power, to rebuke the sinister establishment and Islamic forces arrayed against them.

The "Same God" teaching is a cornerstone of Islamic dawah (proselytization), and is a deceptive "Trojan Horse" theological belief which, on the basis of seeking peace, actually sets up Christians to commit apostasy and deny Jesus Christ, thus cutting themselves off from the grace of God.

Mark Durie warns about this false teaching in his book Revelation: Do We Worship the Same God?:

The traditional Islamic view is that if you want to know what the God of the Bible is like, then read the Koran. Not only must Muslims believe that "we worship the same God," but this message is always a central component of the presentation of Islam to Christians and Jews.

[This message] provides the lynchpin of Muslims’ efforts to convert the "People of the Book" to the faith of Muhammad. In addition, this belief, once accepted, can lead Christians to support Islamic perspectives in ways other than conversion. For example, embracing this Islamic doctrine wins a measure of respect and even support for Islam from Christians. (Durie, Revelation, pp 50-51, 75-76.)


I refute at length, through several arguments, the Same God Heresy in my book, Facing Islam - What the Ancient Church has to say about the Religion of Muhammad.  For a serious Christian, there really is no other way to think about Islam than as a heresy and a "forerunner of Antichrist" (as St. John of Damascus wrote, and he was in a position to know, living under Muslim rule during Islam's first century). Christians today should be prepared to defend their faith, and to explain why Allah is a false god, and Islam a false religion, put forward by a false prophet, and that its primary purpose is the destruction of Christianity.

That Islam claims to worship the same God, and to venerate Jesus, should provide no comfort to Christians, but rather alarm, when Christians finally wake up, study Islam even a little bit, and learn that Islam teaches that Jesus will return, but as a Muslim, with a vendetta against Christians:

In Islam, Prophet Isa is expected to return, but to condemn the Christians’ misunderstanding of him as divine and to literally destroy Christianity and judge all non- Muslims; the Koran universally brands all unbelievers as “the vilest of creatures” (Sura 98:6).

The Prophet Isa will be a “good Muslim,” and will direct his followers to the Mahdi, the Muslim messiah, before taking a subservient position somewhat behind the Mahdi. Isa will “fight the people for the cause of Islam. He will break the cross, kill the swine and abolish jizya” and establish the rule of Allah throughout the world (Hadith from Sunan Abu Dawud, Book of Battles, 37:4310).  (Facing Islam, p80.)


The "breaking of the cross" by this Muslim Jesus ("Isa") contains within it a clear reference to the Koran's denial that Jesus was crucified:


Liberal and milquetoast Christian academics, who routinely tell us "Muslims and Christians worship the same God," will likely dismiss these sincere and honest Christian citizens as "rubes" and "rednecks," lacking the learning to appreciate the "nuances" of Islam. We, however commend their bravery and zeal in standing against a blatant lie, falsehood and heresy being taught as "fact" in public schools, a brazen attempt to indoctrinate students into Islamic beliefs. 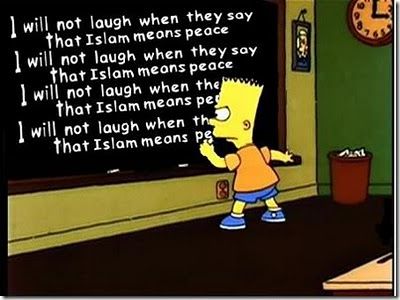 Dozens of people spoke out Monday against a homework assignment made at an Elgin-area U46 school in which it was asserted Christian, Muslim and Jewish faiths all believe in the same God.

One month after the assignment was criticized by U46 school board member Jeanette Ward, people who identified themselves as part of the Christian community attended the school board meeting Monday to add their opposition.

Several people attacked the assignment, quoting Bible and Quran verses to support their argument that Christians do not follow the same God as Muslims. Some of those who spoke live outside the U46 boundaries, including one person who came from Florida.

“To say that Allah of the Quran and the God of the Bible are the same is simply absurd,” said Art Ellingsen, a church pastor from Arlington Heights.

Some also took offense at comments made last month by the Coalition of Elgin Religious Leaders, who spoke out against Ward’s statements on Islam and argued that it was important that all religions be accepted and respected.

L. Dean Hufsey, of Elgin, said Coalition group should have commended Ward, not criticized her.

“By bringing this matter to light, Ms. Ward has done great service for all the sixth-graders and their parents in School District U46,” Hufsey said.

Another speaker said U46 educators and board members were “playing with children’s eternal lives” by incorporating religion into instruction.

“It’s not just something flying in the wind, it’s not just a political issue, it is a faith issue, and faith issues are very important to a lot of people in this community,” said Mark Frusti, a church pastor from Streamwood.

Bill Ward, Jeanette Ward’s husband, said he saw the article his sixth-grade daughter was told to read as part of the assignment and found it advocated atheism.

“Our country was founded primarily on Christian ideals,” he said. “However, it established a secular government. The school district should be founded on these same principles.”

Earlier in the evening, Ward requested that the two dozen speakers who wanted to speak on the issue be allowed to do so during the public comment portion early in the meeting. Her request was denied because the comments weren’t related to anything on the agenda.

Board member Veronica Noland said she didn’t think those at the meeting should have to sit through comments likely “drummed up by political issues” that didn’t pertain to agenda topics under discussion.

Speakers were allowed to talk at the end of the meeting.


“I hear people saying to me, well, we’re all worshipping the same God. We all believe in love. But I say stop a minute, and let’s examine carefully what Islam is, and what our Christian faith teaches us.”

“I don’t believe it’s true that we’re all worshipping the same God, because the God of Islam is a governor,” Burke said. “Sharia is their law, and that law, which comes from Allah, must dominate every man eventually.”