"Islamic persecution of Christians in the Middle East began with the founding of Islam itself in the 7th century, and thus is a permanent fixture of Islam that was present from the very beginning."

Thomas D. Williams of Breitbart has written a compelling article using a variety of contemporary voices to warn of the violent, hate-filled, anti-Christian ideology embedded in the foundation of Islam - the Koran and the example of Muhammad. 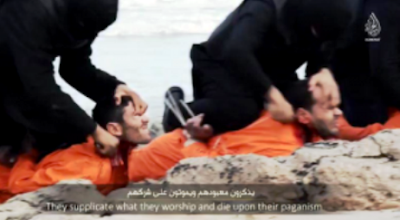 The violent Muslim persecution of Christians in the Middle East did not begin with the Islamic State’s rise to power in 2014, said Iraqi Archishop Bashar Warda, but rather many centuries ago.

“Having faced for 1,400 years the slow-motion genocide that began long before the ongoing ISIS genocide today, the time for excusing this inhuman behavior and its causes is long since past,” said the Chaldean Archbishop of Erbil in a forceful speech last week at Georgetown University.

According to the archbishop, Islamic persecution of Christians in the Middle East began with the founding of Islam itself in the 7th century, and thus is a permanent fixture of Islam that was present from the very beginning.

“The harsh truth to this question is that without an end to this persecution and violence there is no future for religious pluralism in Iraq or anywhere else in the Middle East for that matter,” he said.


Warda’s thesis coincides exactly with that of Jesuit scholar Father James V. Schall, who wrote in 2016 that Islam’s consistent advocacy of violence has been practiced “from its seventh century beginning.”

In a sobering essay titled “Realism and Islam,” Schall, who taught Political Philosophy at Georgetown University for many years and has written more than two dozen books, insisted that the Muslim religion must be evaluated on its own terms rather than through the lens of the Judeo-Christian West.

Violence is intrinsic to the nature of Islam itself, and is not just a symptom of extremism, Father Schall wrote. Its purpose, he proposed, “is, ultimately, religious and pious.”

Recalling numerous acts of Islamic terror and violence in recent years, Schall suggested that the most plausible way to judge such continuing violence is by looking back at Islam over the centuries.

“To make this assessment, we have to acknowledge that Islam, in principle, is actually and potentially violent throughout its entire history.” Moreover, he wrote, the basic reason for this method “is obedience to the Law of Allah.”

“What we see now is little different from what has been seen throughout the centuries wherever Islam is found,” he says.

The reason that violence accompanies Islam wherever it goes, Schall suggested, is that it is part of the essence of Islam and is called for in the religion’s sacred texts.

“The designated and determined goal of the conquest of the world for Allah has been reinvigorated again and again in world history from the time of Mohammed in the seventh century,” Schall declared. “These revivals and expansions, which have only been temporarily halted by superior counterforce, have roots in the Qur’an itself and in its commentaries.”

In the past, scholars like Thomas Aquinas and Hilaire Belloc were convinced that the threat to the West did not come from Muslim “extremists,” but rather from Islam itself. Belloc famously called Islam “the most formidable and persistent enemy” of Western civilization.

Such historical realism can be found not only among Christian scholars, but among those raised as Muslims as well.

In 2016, a former Muslim recounted his story in a USA Today article titled “The Quran’s Deadly Role in Inspiring Belgian Slaughter.”

The writer, Nabeel Qureshi, said that he when began to investigate the Quran and the traditions of Muhammad’s life, “I found to my genuine surprise that the pages of Islamic history are filled with violence.”

The author downplayed other explanations that have been given for Islamic radicalization, such as the State Department’s suggestion that a “lack of opportunity for jobs” was to blame.

“ISIL’s primary recruiting technique is not social or financial but theological,” Qureshi wrote, recalling that the Islamic State appeals to the highest sources of authority in Islam, the Quran and hadith (the collection of the sayings of the prophet Muhammad), reminding Muslims of their duty to fight against the enemies of Islam.

Qureshi wrote that the Internet “has made the traditions of Muhammad readily available for whoever wishes to look them up, even in English,” effectively bypassing centuries of tradition and their imams’ interpretations.

When Muslims do this, “they are confronted with the reality of violent jihad in the very foundations of their faith,” he said.

In his address last week, Archbishop Warda called for historical honesty from both Muslims and Christians. Sugar-coating the historical reality of Islam, as well as the roots of violence in its foundational texts, will benefit no one.

“When a people have nothing left to lose, in some sense it is very liberating and from this position of clarity and newfound courage I must speak to you honestly on behalf of my people and speak to you the truth,” Warda said.

The typical Muslim response to Islamic State atrocities, he said, falls along the line of “ISIS does not represent Islam,” but rarely goes further, with no recognition of past persecution of Christians or any expression of remorse for it.

“We object that one faith has now the right to kill another. There needs to be a change and a correction within Islam,” he said.

Estimates suggest that the Christian population in Iraq has fallen to some 200,000, down from about 1.5 million in 2003.

“So many of our people have fled, and so few of us are left,” Warda said.

“While it is true that our numbers are small, the number of Apostles were also small,” he said.