"The new poster against the Russian spiritual and political leaders shows the pair in crosshairs, with the words 'BREAK THE CROSS' in English and 'soon, very soon' in both Arabic and Russian." 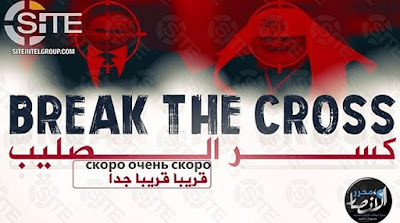 New propaganda posters from the jihadi organization ISIS are taking aim at His Holiness Patriarch Kirill and President Vladimir Putin of Russia in particular, as well as America and London, reports orthodoxia.info with reference to the SITE Intelligence Group.

The new poster against the Russian spiritual and political leaders shows the pair in crosshairs, with the words “BREAK THE CROSS” in English and “soon, very soon” in both Arabic and Russian.

The poster has been released on the eve of the March 18th Russian presidential election, and just after ISIS claimed responsibility for the shooting deaths of five Orthodox women just outside their church in Dagestan last Sunday. The Islamic State has also recently threatened to launch attacks against Russia due to the Kremlin’s support for Assad’s forces in Syria, as it has suffered massive blows in Syrian and Iraqi battlefields recently. 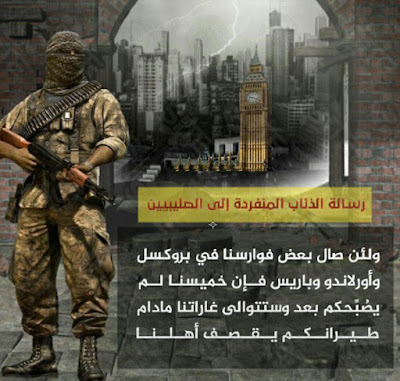 Another poster being circulated among extremists shows an armed jihadist in front of an image of Big Ben and the British House of Parliament in London. According to SITE Intelligence, another poster calls for militants to “burn America.”

A previous image of Big Ben was revealed in November, showing the famous clock tower burning with a large crack across its side and an ISIS flag flying atop it, reports The Daily Mail. The message read, “We will destroy your country, as you destroyed our country.”

Similar violent propaganda was released by the radical feminist organization FEMEN International in 2015, showing a topless slender blonde, decked in a blasphemous crown of barbed wire thorns, pointing a gun, over an image of Pat. Kirill and the words “KILL KIRILL.”