The Martyrdom of Bassem, killed by Muslims for having a tattoo of the Cross on his wrist

Each Christian Martyr in the Islamic world provides us with an opportunity to be shocked out of our pathetic Western sloth and ease, which is why Orthodox writers throughout the centuries have always compiled lives of martyrs to strengthen the faithful.

New-Martyr Bassem was described by a friend (see below) as follows: 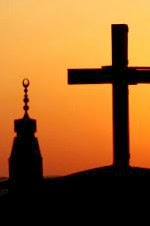 “Bassem was a very good man... Honest, quiet, modest, a light-hearted person and close friend to me. From early childhood he loved the Church and he was a man of prayer and worship. He didn’t renounce the faith and didn’t deny his Lord Jesus Christ. He didn’t fear death. Actually, he didn’t die but has won the real life in Heaven...”


The Muslims who killed Bassem were acting on the dictates of the demon Allah as recorded in the Qur'an:

So, when you meet those who disbelieve, smite at their necks till when you have killed and wounded many of them, then bind a bond firmly on them... Thus you are ordered by Allah to continue in carrying out jihad against the disbelievers till they embrace Islam. (Sura 47:4)

Bassem Herz Attalhah did not love his life more than Christ. Rather, he willingly and openly witnessed to his faith in Christ by having the sign of the Cross tattooed on his wrist, a pious tradition which many Coptic Orthodox Christians observe. Bassem did this despite living in a region and in an age when simply being a Christian is likely to mean martyrdom because of Islam's hatred for the Cross and the vast numbers of Muslims who strive to carry out the murderous and satanic teachings of their false god and false prophet.

Each Christian martyred by a Muslim is another bloody testimonial that the "god" of Islam cannot possibly be the same as the True God.

Christian leaders who insist on defending Islam against criticism and who assert the "Same God" heresy are betraying every Christian martyred by Muslims since the early 7th century up to today, and they are betraying Jesus Christ Himself, who warned:

"I have told you these things so that you will not fall away... The time is coming when anyone who kills you will think they are offering a service to God" (JN 16:1, 2).

In the same discourse, the Lord very simply tells the reason why Muslims kill Christians:

"They will do these things because they have not known the Father or Me" (JN 16:3).

In other words, they do these things because they know and worship a different god, a false god.

So what should Christian leaders do when Muslims kill Christians?

The Christian response to Muslims murdering Christians can be summed up in four clear steps (with a fifth for those Christian bishops and priests able to undertake it):

We live an a new age of martyrdom. It is well past time for us to vigorously proclaim Jesus Christ, to honor the martyrs who confessed Him even unto death, and to honor the Lord by plainly and without "nuance" rebuking the evil false religion which preaches and practices murder. "By their fruits you shall know them."

Is that so hard to do?


Militants belonging to the ‘State of Sinai’ group in Egypt have promised to “kill more Copts” after murdering a 27-year-old Coptic man because of the tattoo of a cross on his wrist.

Bassem Herz Attalhah, also known as Haythem Shehata, was on his way home from work in El-Arish, capital of North Sinai governorate, on Saturday evening (13 January), with his brother Osama and neighbour and friend Mohamed, when they were stopped by three armed men, aged between 23 and 25.

“We thought they were policemen because they weren’t masked… They were wearing black jackets,” Osama, 38, told World Watch Monitor. “They approached us and asked Bassem to show them the wrist of his right hand, and when they saw the tattoo of the cross, they asked him: ‘Are you Christian?’ Bassem answered ‘Yes, I am Christian’, and repeated that again in a loud voice.”

The men then asked Mohamed his name and made him show his wrist. When they saw he had no tattoo, he was allowed to leave.

Then they turned to Osama.


Osama is a common name, also among Muslims, and the men didn’t know he was Bassem’s brother.

“Bassem told them that I had children,” Osama recalls. “They asked me to show them the wrist of my right hand and, when they didn’t see any cross, they thought that I was Muslim.” The men didn’t see the cross that Osama has tattooed on the top of his hand because it was hidden under his sleeve.

“They fired two shots on the ground close to my legs and asked me to leave,” he recalled. “And then they shot Bassem in the head. I could not believe what happened to my brother. He fell on the ground in front of me and I was unable to do anything.”

On his way to find help, Osama says his legs gave way from the shock. Their mother, upon hearing the news, fainted and had to be taken to hospital.

“We lost a person dear to our hearts. My brother Bassem was a very good and kind man. He had a strong relationship with God. He was always reading in the Bible, praying and going to the church. He was loved by all people,” Osama said.

When Bassem’s close friend Milad Wasfi heard he had been killed, he couldn’t believe it and called his friend’s phone. His call was answered, but not by his friend.

“The terrorists answered me and said they belong to State of Sinai and promised to kill more Copts before they put down the phone,” he told World Watch Monitor.

Scores of Coptic Christian families left for Ismailia and Suez, about 200km away, after a string of killings in El-Arish last year – including one incident where a woman witnessed her husband and son killed by a gunman who then ticked them off an IS hit-list. In March 2017 it was estimated that 70 per cent of the 160 Coptic Christian families living in the city had left.

Bassem, Osama and their parents had been among those who fled the city. Struggling to find work in Ismailia, however, the two brothers left for Cairo, and when things did not work out for them there either, they decided to return to El-Arish in September….

... “Bassem was a very good man,” Milad says. “Honest, quiet, modest, a light-hearted person and close friend to me. From early childhood he loved the Church and he was a man of prayer and worship. He didn’t renounce the faith and didn’t deny his Lord Jesus Christ. He didn’t fear death. Actually, he didn’t die but has won the real life in Heaven, enjoying being with Jesus. We pray that God will comfort us [and] thank God for saving the life of Osama, to care for his five children and his parents.”