"What was previously reported as an unidentified “gunman” was a jihad murderer, Halilov Khalil Umarovich, who pledged allegiance to the Islamic State and then, screaming “Allahu akbar,” went to the church and opened fire." [1]

Imagine exchanging the divine gift of forgiveness with your brothers and sisters in the holy Church, signifying the beginning of Great Lent, and then being swiftly attacked, stabbed and shot at by a Muslim screaming "Allahu akbar." Imagine in that instant realizing you were going to die, and surrendering yourself into the hands of our merciful Lord Jesus Christ, and in that fleeting moment, forgiving even your enemies who are killing you.

This is the instantaneous realization these five women had this past Sunday.

This is happening all around the globe. Every day.

The martyrdom of these five Orthodox Christian women, is a sign of our age, a sign of life today under the sword of Islam, and a sign of the end of the age. As the choir of Christian martyrs under Islam continues to grow, we must be ever more vigilant, watchful, and faithful. We must earnestly and continuously repent and be ready at all times to be found in Christ and in His Holy Church. The enemy is at the very doors.

As the Great Prokeimenon for Great Lent exclaims:

Turn not away Thy Face from Thy child for I am afflicted,
Hear me, speedily draw near unto my soul,
and deliver it...

This post collects several reports on this horrific jihad attack in the Russian Republic of Dagestan. 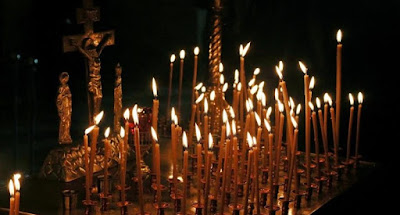 Women killed at Dagestan Church to be buried on Church grounds as having received Martyric deaths,

The five women, Vera, Lyudmila, Nadezhda, Irina, and Vera, who were shot and killed outside of the Cathedral of St. George in the city of Kizlyar, in the Russian Dagestan Republic on Sunday will be buried on the territory of the church, the acting head of Dagestan Vladimir Vasiliev said at a meeting with Kizlyar city administration yesterday, reports Interfax-Religion.

“It is very important that the funeral ceremony will be held tomorrow [today] on the grounds of the church,” Vasiliev stated.

Today has been declared a day of mourning in Kizlyar.

According to the republic head, the decision to bury them on church grounds was made by Archbishop Varlaam of Makhachkala and Grozny.

Following the emergency meeting with the city administration, Vasiliev visited the Cathedral of St. George, the place of the tragedy, to lay flowers in memory of the innocent victims, the Diocese of Makhachkala reports. He was joined by Abp. Varlaam and several other public officials. People had already been flocking to the church since the early morning.

An armed criminal opened fire on parishioners leaving the Cathedral of St. George the Victorious in the city of Kizlyar in the Russian republic of Dagestan yesterday evening. The faithful had just finished the Rite of Forgiveness when they were fired upon, resulting in the deaths of five innocent women. Two other parishioners and two security guards were also injured.

The Orthodox Church calls upon its faithful sons and daughters to enter in upon the Great Lenten fast ever year with the Rite of Forgiveness, in which we ask one another to forgive us for all of our sins against one another, both voluntary and involuntary. Both entreating and offering forgiveness, we thus begin our journey to holy Pascha through Great Lent and Holy Week with purified hearts. The terribleness of the violence carried out against such Orthodox faithful is magnified in comparison with the holy act of peace that the victims had just undergone.

As the Lord Jesus Christ teaches, if we forgive men their sins, so our Heavenly Father will forgive us our sins.

The assailant was shot dead by police officers after he tried to escape. It has been established that the shooter was a local, born in 1995. The Investigative Committee of Russia has opened a criminal case under the articles of “Murder with aggravating circumstances,” and “The encroachment on the life of a law enforcement employee,” reports the site of the Russian Orthodox Church.

His Holiness Patriarch Kirill has sent his condolences to Archbishop Varlaam of Makhachkala and Grozny, and to the families and friends of the fallen parishioners, in which he called the murder of the innocents on the threshold of the church “a terrible and cynical crime, which does not, and cannot have, any justification whatsoever.”

“I pray to our Lord Jesus Christ for the speedy recovery of the wounded, for the strengthening of those who have lost family members, and for the repose of the innocent servants of God who were killed, Vera, Lyudmila, Nadezhda, Irina, and Vera in the dwellings of the righteous,” the patriarch’s condolences read.

His Holiness also instructed the clergy of the Makhachkala Diocese to provide any and all necessary assistance to the victims of the families.

Pat. Kirill has also expressed his deep shock at the incident, coming, surely by no accident, on the eve of Great Lent, and believes it is meant to provoke hatred between members of different religions that have managed to coexist peaceably in the Caucasus.

“The Russian Church expresses deep concern over this incident, and insists upon the most thorough investigation of the crime,” said Fr. Alexander Volkov, the head of the patriarchal press service.

For his part, Abp. Varlaam also called on “all the children of the Makhachkala Diocese to pray fervently for the souls of the innocent victims … and to offer fervent prayers for the health of the wounded.”

Among the victims were a well-known doctor and her sister who was a public figure who also helped a lot at the church, a former teacher who often organized pilgrimages, and a woman who would beg for alms at the church.

Hieromonk John (Anisimov), the secretary of the local diocese, noted that the churches were not protected, because, although there have been terrorist attacks in the area, there were never attacks on churches or clergy before.

Pat. Kirill served a litiya for the departed today in Christ the Savior Cathedral before reading the Great Canon of St. Andrew of Crete. Abp. Varlaam also served a litiya today in the Cathedral of St. George where the tragedy occurred, and met with the families of the victims, offering his prayers and consoling words.

5 killed, including gunman, in shooting at festival in southern Russia

Moscow, Russia: Five women were shot dead in an apparent radical Islamist attack on an Orthodox church in the North Caucasus region of Dagestan on Sunday, officials and local media said.

According to local press reports an unidentified gunman fired at worshippers at an Orthodox church in the town of Kizlyar in the mainly Muslim region.

Two Russian police officers were injured in the attack.

The attacker was “eliminated” by police fire, the regional internal affairs ministry added.

According to a local official the assailant was a local man in his early twenties, the Interfax news agency reported.

The Russian RBK daily quoted an Orthodox priest saying the attacker had opened fire on churchgoers following an afternoon service.

“We had finished the mass and were beginning to leave the church. A bearded man ran towards the church shouting ‘Allahu Akbar’ (‘God is greatest’) and killed four people,” Father Pavel told RBK.

“He was carrying a rifle and a knife,” he added…