Muslims Experience Miracle at the Tomb of Saint John the Baptist 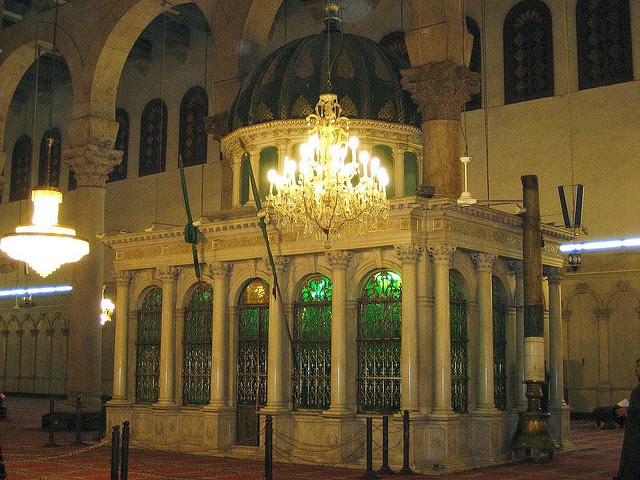 In Damascus, Syria stands the magnificent Cathedral of Saint John the Baptist, established by Justinian.

Ever since the Arabs conquered the area (7th cent. A.D.), it was converted into a mosque [the Umayyad Mosque, 715 AD]. However there is a place in the colossal church where there is a wonderful, artistic and quite large mausoleum. This is the tomb of the honorable head of the Baptist. [...]*

After the fourth finding of the head of this Saint, the found relic was enshrined in this church by Justinian in a beautiful tomb. When the Muslims converted the church into a mosque they also put their hands against the tomb. But they were horrified, because with the first hit warm blood began to run from it, and it continued to run for several days and nights. It would not stop. The panicked Arabs asked for the prayers of the Christian patriarch. He with all the sacred clergy of Damascus processed around the tomb for three days, and on the third day the blood stopped. A special script with Arabic gold letters on the monument chronicles this shocking incident. Until today the Muslim world respects very much the tomb of the Forerunner, and at the same time fear him. No one dares to approach him.

* On this spot stood the largest temple in Roman Syria, which was dedicated to Jupiter. In 391 Emperor Theodosius I (r. 379–395) converted it into a Christian Cathedral. It became associated with Saint John the Baptist when his head was said to be enshrined there. The sixth Umayyad caliph, al-Walid I (r. 705–715), commissioned the construction of a mosque on the site of the Roman Orthodox Cathedral in 706. [Note by Translator]
Posted by Zosimas at 1:46 PM