from Israel Today, January 21, via JihadWatch 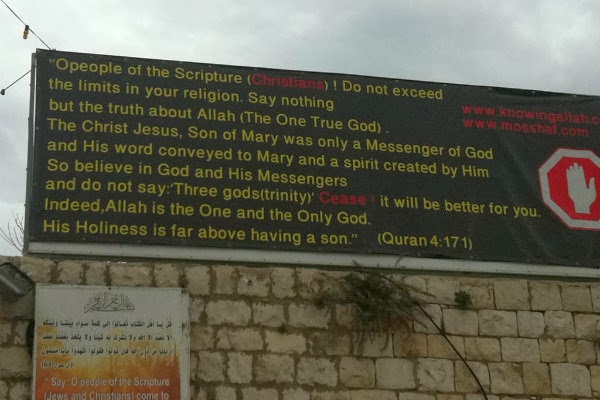 As Christians of every stripe in Jesus’ hometown of Nazareth begin to again take a real stand for their faith, local Muslims are warning them not to overstep the boundaries of their traditional place in the Middle East (hint: they must remain dhimmis, or second-class).

A large billboard hanging at a central point in Nazareth features a picture of an Israeli stop sign, along with the English translation of a verse from the Koran cautioning Christians (and Jews) to speak only the “truth” regarding Allah.

“O people of the Scripture (Christians)! Do not exceed the limits of your religion. Say nothing but the truth about Allah (The One True God). The Christ Jesus, Son of Mary, was only a Messenger of God and His word conveyed to Mary and a spirit created by Him. So believe in God and His messengers and do not say: ‘Three gods (trinity)’. Cease! It will be better for you. Indeed, Allah is the One and the Only God. His Holiness is far above having a son.”

Evangelical Christians from Nazareth have become a growing and integral part of the overall Messianic body in the land, while traditional Christians (Catholics, Greek Orthodox, etc) have been waking up to their historical and religious connection to the Jews and are joining the Israeli army in ever greater numbers.