"They want to extinguish the last vestige of Christianity and void out her existence.” 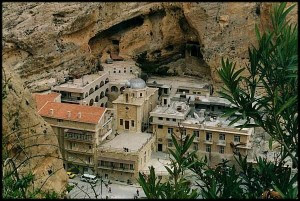 Twelve nuns kidnapped from the Mar Takla Orthodox convent are still being held by our friends, the Syrian “rebels.” They were taken away in early December in a raid by terrorist Abu Jafar, leader of the Battalion of the Martyr Abu Taan. Jafar pillaged the monasteries there, andsold off the goods in Lebanon.

On January 12th, Jafar and his family were all found murdered, likely due to rivalries among warring factions.

With his death, new reports are emerging about just what happened at the monasteries, including the desecration and looting of the Tomb of St. Thecla. The fate of the nuns is still uncertain.

The Lebanese Calam reported on January 13 that “jihadists plundered the grave of Saint Thekla”. According to Father Makarios Gulwma, secretary of the Patriarchate of Antioch and All the East for the Catholic Melkites told RIA Novosti:

“The fighters of Al-Nusra and Free Sham removed the bells of the churches of historic Maaloula, torched the iconostasis of the Orthodox Monastery of St Thekla as well as the Melklite Catholic Monastery of Saint Sergius, and they plundered the grave of St. Thekla after digging it up. They burned all the crosses and destroyed them.”

The same witness complained that they stole the bronze statue of the enthroned Jesus adorning the Monastery erected by the Orthodox Foundation of Saint Paul of Syria. The statue was sculpted by the famous Russian sculptor Alexandre Rukavhanikov. Fr. Makarios conveyed the indignation of this martyric town:

“They stole our most important symbols, even the bells that call us to prayer. Men of Al-Nusra burned our homes. They want to extinguish the last vestige of Christianity and void out her existence.”

St. Thecla was a companion of St. Paul, and is the featured in the apocryphal work, The Acts of Paul and Thecla.

Please pray for the Christian community in the middle east, which is being exterminated day by day, and for the safe return of the nuns.