Muslim Prayers at Hagia Sophia - A Sign Calling Us to Repent

Islamic prayers were recently held at the Hagia Sophia in former Constantinople in a televised event attended by Turkish officials and strongly condemned by the Greek Foreign Ministry.

This is yet another highly symbolic event inked to this great and ancient church building, which we Orthodox Christians must respond to... 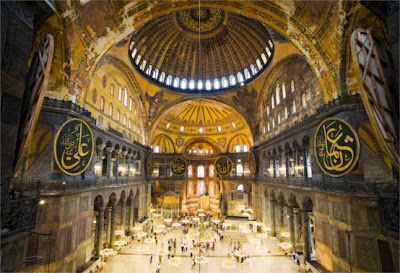 There has been a growing movement within Turkey for several years demanding the re-conversion into a mosque of Hagia Sophia — for centuries the greatest church in all of Christendom. The great church was turned into a mosque in 1453 after the Muslim Turks conquered Constantinople and subjugated the surviving Christian inhabitants. Following the defeat of the Ottoman empire in World War I, the new leader of the secular state of Turkey, Kemal Ataturk, in 1935 put a stop to Islamic prayers in Hagia Sophia, and had it converted into a museum.

Ever since Recep Tayyip Erdogan came to power in Turkey in 2003, calls for turning Hagia Sophia back into a functioning mosque have been steadily increasing. Following one such occurrence in May 2014, I wrote the following:


Muslim Prayers at Hagia Sophia - A Sign Calling Us to Repent


Erdogan has set his sights on Hagia Sophia, to turn the once luminous church structure into a dark and oppressive mosque again. Such a symbolic achievement would appear to Muslims as a second conquering of Christendom, bolstering Erdogan's push to reinstitute the Islamic caliphate, with Turkey at its head.

Islam must have such temporal victories and exert political and military domination in order to justify its existence, as Muhammad's successes in battle, culminating in his retaking of Mecca ten years after being driven out in weakness and disgrace, forever set the example for Muslims to follow.

But worldly success and temporal victories and kingdoms are not the Christian way.

Christians follow Jesus the Christ, the Son of the Living God, who "had no place to lay His head," who emptied Himself, taking the form of a servant, and who submitted Himself fully to the divine will of the Father, even to the point of death on the cross. Here we have no city, but are called to be pilgrims and aliens, journeying to our heavenly homeland. In the radical words of our Lord Jesus Christ, we are called to take up our cross and follow Him. As Fr Seraphim Rose put it:

"Let us not, who would be Christians, expect anything else from it than to be crucified. For to be a Christian is to be crucified, in this time and in any time since Christ came for the first time.

"His life is the example—and warning—to us all. We must be crucified personally, mystically; for through crucifixion is the only path to resurrection. If we would rise with Christ, we must first be humbled with Him—even to the ultimate humiliation, being devoured and spit forth by the uncomprehending world.

"And we must be crucified outwardly, in the eyes of the world; for Christ's Kingdom is not of this world, and the world cannot bear it, even in a single representation of it, even for a single moment."

If the Muslims convert Hagia Sophia into a mosque a second time, then we Christians must see in this God's providential will. If God allows the enemy to reconquer Christian symbols, then we must take it as a warning to not place our trust in mere symbols, but in the Real and True Son of God Himself. We must allow such calamities to spur us on to ever deepening faith and ever more fervent repentance.

As Islam and the other forces of evil wage open warfare against Christ and His Church in these last times, we are called to be faithful to the end. And if we remain faithful, then, like the Lord, we shall find our victory mystically concealed in our Golgotha.


Scroll down for the latest news story in this drama which extends back to the early Islamic sieges of Constantinople... 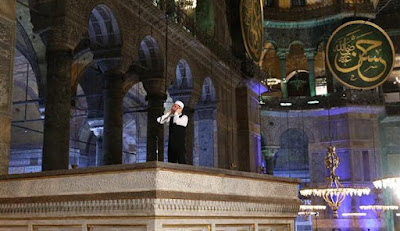 The Greek Foreign Ministry issued a statement on Thursday objecting to Muslim prayer services held at the Hagia Sophia in Istanbul, a televised event attended by Turkish officials.

The Greek statement cited the historic importance of the Hagia Sophia as well as its significance to the Christian religion:

Hagia Sophia is a UNESCO world heritage site. The attempt to convert it into a mosque – through reading of the Koran, holding of prayers, and a number of other actions – is an affront to the international community, which needs to be duly mobilized and to react.

This is a clearly unacceptable challenge to the religious sentiments of Christians everywhere and to all those who honor humanity’s cultural heritage, and it is taking place at a time when the interfaith dialogue should be promoted rather than undermined.

We call on Turkey to conduct itself as a modern and democratic country, to protect the ecumenical nature of Hagia Sophia, and to respect the age-old tradition of this global monument.


The U.S. State Department also objected to the event in Turkey, in a much more qualified manner.

Responding to a question from a Greek reporter, spokeswoman Heather Nauert said, “The site, Hagia Sophia, is a site of extraordinary significance and we understand that, we respect that. So we call on the Turkish government to preserve the Hagia Sophia in a way that respects its complex history.”

However, Nauert said she was not specifically opposed to reopening the cathedral as a mosque.

“It’s a complex history, and we recognize that it is of great significance to other faiths, many faiths, and so we would just encourage the Turkish government to do that, to preserve it,” she said.

The Hagia Sophia was built in what was then known as Constantinople by the Byzantine emperor Justinian I in the 6th Century, well before Islam existed. It was constructed on the site of a church that had been damaged and rebuilt several times over the previous three hundred years. The church, in turn, is believed by some to have been constructed atop an ancient pagan temple that is still partially intact, somewhere beneath the Hagia Sophia as we see it today.

The four towers surrounding the central building are indeed Muslim minarets, added after the Turks conquered Constantinople in 1453. It functioned as a mosque until the father of secular Turkish government, Mustafa Kemal Ataturk, officially converted it into a museum in 1935.

Neos Kosmos points out that Muslim prayer services have been held at the Hagia Sophia since 2015 to commemorate Laylat al-Qadr, the “Night of Power” or “Night of Destiny.” It is the holiest night of the year in Islam, the night when Mohammed began writing the Koran with angelic assistance. Greece has protested this program every year since its inception.

Greek objections were particularly vehement this year because a nationalist Turkish political leader, Mustafa Destici of the Great Union Party, directly taunted Greece in a statement: “Let Greece and the world hear that Hagia Sophia is a mosque. With the blessing of Allah, religious ceremonies will soon take place and prayers will be read there again.”

Turkey’s Foreign Ministry fired back at Greece in a statement on Friday, criticizing it for not providing mosques as requested by its Muslim minority.

“The Ministry of the Foreign Affairs of Greece, instead of extending its congratulations to the Turkish people on the holy month of Ramadan and the ‘Night of Power’ (Kadir Gecesi), opted for distorting the recitation of Quran and call for prayer in Hagia Sophia,” the Turkish ministry said.

“The record of Greece in the field of freedom of religion, which is among the fundamental human rights, is well-known,” the Turkish Foreign Ministry added, sneering that without a mosque in Athens, the Greeks are in no position to talk about “interfaith dialogue.”