"Perhaps some today find Christianity irrelevant to their lives because they have never seriously encountered the Orthodox experience of Jesus Christ."

Homily for the Sunday After the Ascension in the Orthodox Church
by Fr Philip LeMasters, Pravoslavie, June 2, 2017: 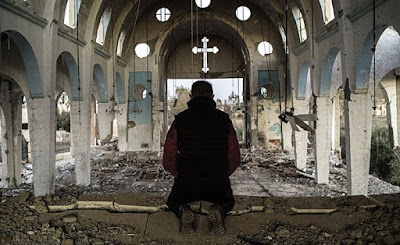 A recent survey of Americans about religion is getting a lot of attention, especially because it shows that fewer people now identify themselves as Christians and more consider themselves unaffiliated with any religion. Perhaps at least part of the reason for these declines is that many people have not found something worth living and dying for in the churches with which they are familiar.

Their experience reflects the failure of so much Christianity in our culture to embody with integrity the good news that we celebrate during this season of the Ascension, which invites us to participate personally in the fulfillment of our humanity in the risen and ascended Savior. The Lord went up into heaven forty days after His resurrection. In Him, humanity and divinity are united in one Person; He rises into heaven as the God-Man. His Ascension shows that the Son shares in the glory that He had with the Father and the Holy Spirit before the creation of the world.

"The power of the risen and ascended Son of God continues in the Church, especially in the witness of the martyrs to this day who share in a victory that is not of this world."

And He brings us into that glory with Him. The Ascension is a brilliant icon of our salvation, for it makes clear that our Lord has raised us in all dimensions of our existence—not only from the tomb, not only from Hades—but into the eternal life of the Holy Trinity. In the ascended Christ, we truly become participants in God, partakers of the divine nature by grace even as we live and breathe in a world that so often forgets the One Who spoke it into existence.

The Ascension reminds us that Orthodoxy is not an “I’ll Fly Away” religion that excludes holiness and union with the Lord from life as know it. The point is not to escape our bodies or any dimension of earthly reality, but to offer every aspect of our life to Christ for blessing such that we already experience the life of heaven even in a world that increasingly thinks of God as irrelevant.   He ascended with His glorified body, and we “look for the resurrection of the dead and life of the world to come” as the ultimate fulfillment of His good creation.

The Ascension also reminds us that Jesus Christ is not merely a great teacher or example or even an angel or lesser god. As the Fathers of the First Ecumenical Council of Nicaea proclaimed, He is light of light, very God of very God, of one essence with the Father, the only begotten Son of God.   Only One who is truly divine and eternal can ascend into heaven and bring us into the divine, eternal life of the Holy Trinity. That is why the Council of Nicaea rejected the teaching of Arius, who did not think that the Son was fully divine. That is why the Orthodox Church has always disagreed with those who deny our Lord’s full divinity or His full humanity. Only One who is truly both God and human can bring us into the life of God as our Savior.

Perhaps some today find Christianity irrelevant to their lives because they have never seriously encountered the Orthodox experience of Jesus Christ. Many in our culture seem to think of the Lord as little more than a good teacher and example with a message not that much different from that of secular and other religious figures.   We do not have to be geniuses to figure out that it is possible to be a nice person and a good citizen without being a Christian or religious at all.

Like Arius, many throughout the centuries have made Christ in their own image as an exemplary human being according to whatever standard they found appealing in their time and place. While that might be useful for some cultural or political agendas, such interpretations quickly fade when people figure out that they can achieve their worldly ends quite well without a little religious icing on the cake of what is really important to them. At best, this attitude produces a wimpy faith that does not last and most people will not take seriously.

In contrast, Orthodoxy maintains the ancient faith of the Church that Jesus Christ, the God-Man, has conquered death in His resurrection, ascended into heaven, and made us participants by grace in the life of the Holy Trinity. We must never seek to water-down our faith in the Savior in an attempt to make following Him popular, easy, or fully in harmony with our culture. Should it be surprising that to ascend with Him to a life of holiness in our corrupt world will demand discipline, sacrifice, and being out of step with many trends? Would it not be strange if offering our lives for blessing to the crucified, risen, and ascended Lord were as easy and ultimately insignificant as simply being nice or fitting in well with social norms?

"Remember that, in a matter of days, Christ’s disciples went from total despair and defeat at His crucifixion to the astounding joy of the empty tomb and the amazing sight of His Ascension."

Sometimes looking at other cultures helps us see our own situation more clearly. To this very day, many Christians in the Middle East (Orthodox, as well as others) lay down their lives as martyrs for their faith in Jesus Christ. In that region and in other parts of the world, our brothers and sisters suffer persecution, abuse, and harassment from oppressive governments and hostile groups [i.e. Muslims] that want to eliminate them and their faith. Communism and fascism made countless martyrs during the 20th century. The same is true of the Armenian, Greek, and Assyrian genocides at the hands of the Turks that began a hundred years ago.

Few in our culture recognize that many millions of Christians have died for their faith over the last century. Thousands continue to do so each year. Like the martyrs of the early Church, they do not go to their deaths out of loyalty to a mere human teacher or an example of how to be a moral or pleasant person. They certainly do not do so because being a Christian brings them any kind of cultural or worldly advantage. No, they simply refuse to abandon a Lord Whom they know as God, Who has conquered death, ascended into heaven, and Who has strengthened them to share in His eternal life even as they literally follow Him to the cross.

Remember that, in a matter of days, Christ’s disciples went from total despair and defeat at His crucifixion to the astounding joy of the empty tomb and the amazing sight of His Ascension. These were life-changing experiences that gave them the strength to sacrifice their own lives for the Lord. Generations of martyrs do not give their lives for even the best teachers and good examples, but the power of the risen and ascended Son of God continues in the Church, especially in the witness of the martyrs to this day who share in a victory that is not of this world.

"He calls us to become living icons in ways that attract others to the joy, blessedness, and fulfillment of the Kingdom."

The early Christian teacher Tertullian wrote that “The blood of the martyrs is the seed of the Church.” In ways that may seem surprising, people in the early history of the faith were drawn by the witness of those who gave up their lives for Christ. Perhaps they sensed that something different, something new, something truly worth living and dying for had led the martyrs to their great sacrifice. That is apparently what they wanted in their own lives. Many people still do today.

As we celebrate the Ascension, we should recognize that what we have to offer the world is our witness that the crucified, risen, and ascended Lord has brought us into the eternal life that He shares with His Father and the Holy Spirit. His divine glory shines in the witness of the martyrs to this day, and must shine through us in ways that go behind what even the best teacher, example, or political activist could inspire. We must demonstrate with integrity that He is worth living and dying for in a culture where so many make the world their god. We will do so by ascending with Him to lives of brilliant holiness even as our feet remain planted firmly on the ground.

He calls us to become living icons in ways that attract others to the joy, blessedness, and fulfillment of the Kingdom. He enables us to live in this world as those who already have experienced its salvation. He commands us to radiate the divine glory in which He has made us participants. If we do so, we will bear witness to the truth of the Ascension, and many in our culture will be drawn to our Lord, God, and Savior Jesus Christ for the first time.   And by His grace, they will see that He is the Way, the Truth, and the Life.