Samia the Confessor of Egypt

"We very well know our path, we know our place very well is in faithful hands. Our God is a strong God. He is a God of love. He gave us to love and not to hate."

English transcript of an interview with one of the survivors of the shooting that occurred on May 26, 2017 in Minya, Egypt against the Coptic Christians. Samia lost most of her family and she continues to reflect the light of Christ, confessing her faith and love. 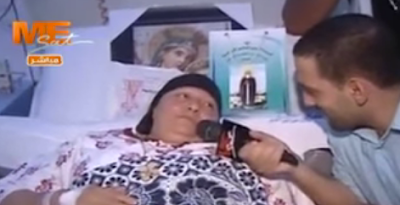 Interviewer: I want you to tell me your name.

Samia: Thank God. Believe me, we are comforted. I am not upset about those who went to heaven, believe me. I placed them in safe hands, better than the world and the problems of the world, all the bad things in the world. They left on the feast of the Ascension. And their dad came from America to have them around him.

Interviewer: Tell me first, where are you from?

Samia: I am from Nazlet Hanna in Fashn.

Interviewer: Fahn is in Bani Suef?

Interviewer: So that day, tell me from the beginning what happened?

Samia: what happened is that we were going to the monastery of Anba Samuel. We headed out in the faithfulness of God, singing with joy. And we were about to arrive and they attacked us. The blessing came to us.

Interviewer: These criminals, these terrorists, you call them “the blessing”?

Samia: Yes, may God bless them and protect them.

Samia: Bless the demons, to show them His way. Of course, God will reveal Himself for these people and He will show them His way one day. Because they are absent-minded. They do not know the strong faith. If they know the strong faith, they would not have seen the people who are faithful, the ones who know God, and hurt them. We were going to a holy place, we were going to pray in a holy place, to become comforted and joyous by it. So, they don’t want us to be joyful in the world. We don’t have a place in the world, believe me. We have a place in heaven. This world has no use. Plants, and at the end we will go to Paradise. We very well know our path, we know our place very well is in faithful hands. Our God is a strong God. He is a God of love. He gave us to love and not to hate.

Interviewer: Which bus were you in?

Samia: The bus of mister Bushra, the one who is injured here.

Interviewer: You were all a family present, right?

Interviewer: Who from your family went to heaven?

Samia: My two boys, they are married. One has two boys and one has two girls and a boy. One of the girls went to heaven.

Interviewer: How old is she?

Samia: 5-yrs old. And my husband. He died in my arm after he knew his boys went to heaven. My daughter’s son, 3rd year in preparatory school. He was awaiting his graduation. She doesn’t have but him. They put a bullet in his mouth as he was sitting in front of me.

Interviewer: He was in preparatory school?

Samia: Yes, in his 3rd year. He was awaiting his graduation. He is her only son. And her two daughters, they injured us in our legs after they took the gold. They didn’t want us to pray. Every time we pray, they hit us.

Interviewer: You prayed when they attacked?

Samia: Yes, we were praying, saying, “O, Jesus”. We have no one but Him. And we called on the saints. The more we spoke and prayed, the more they hit us. But I wish they had hit us in our heads. We would have been done. We would have gone to heaven. I mean, I was ready, believe me. We are not afraid of death. Until the last drop of our blood, we are Christians. We will live as Christians and die as Christians.

Interviewer: How many were they?

Samia: I don’t remember, believe me, my son. I was not completely aware.

Interviewer: What was their language?

Samia: It seemed that they were Egyptians. One of them said to me, “Give me your gold and your mobiles”.

Interviewer: He spoke to you that way?

Interviewer: from your experience since you are a mom and raised children and know through experience, could you tell their age?

Samia: Young in age. Young youth in their 20’s.

Interviewer: In their 20’s, young?

Samia: Young, my son, I saw their eyes. Young youth. May God show them His way.

Interviewer: what were they wearing?

Interviewer: Were they all wearing the same thing?

Samia: They covered their faces and only their eyes showed.

Interviewer: Were they all carrying weapons or was there someone filming?

Samia: I didn’t see the one filming. All I saw was shooting, they had weapons and they were shooting.

Interviewer: And after they left, how was the situation? What did things look like? When did the first people come to rescue you?

Samia: Longer than 2 to 3 hours. They were calling; my daughter-in-law and my other daughter-in-law left me. They went to the ambush station; I don’t know how many kilos they walked. I don’t understand these things. I did not know where she was. She went to call the police. The police told her it was a false claim. Phone calls; and the police officer was angry with her.

Interviewer: So, she was seeking rescue and they told her that it was a false claim? As if it wasn’t true?

Interviewer: No one heard the sound of the bullets? Did they have silencers or what? Was there sound from the firing?

Interviewer: Meaning, to do their part?!

Man: Yes, to do their part and enter and capture them. But they just prevent the families from entering and seeing their family members; they let the people get shot. A very difficult thing.

Interviewer: Our mother, what do you say to the people in this situation? How do you feel? With what have you come out from it?

Interviewer: You ask for forgiveness to these people and you say that they are a blessing.

Interviewer (to camera): I think that if the people who did this were listening to us, or had the chance to listen to us, I think they will be burned… “God forgive you” is…

Samia: Believe me, God will give them grace and they will know Him.

Interviewer: …this is a burning love. I mean, what is your opinion of the “corrupt” doctrine? Is the corrupt doctrine good? It is a doctrine that forgives. Imagine, a doctrine where a mom lost her husband, both her boys, two grandchildren – five, and her daughter and her kids are injured. Her son died and her nephew died. All her family…you killed her family and this “corrupt” doctrine says “God forgive you!” Impossible!

Interviewer: May God give you strength and send you recovery. Just as you were going to the monastery of Saint Samuel the Confessor, you have now become…what?

Interviewer: Now, you are a confessor in front of the whole world!

Samia: Thank God, and they are also at Saint Samuel’s. They also went there.

Interviewer: They were buried there?

Interviewer: Good, so they are now in the place where they wanted to go.

Samia: The place where they were going to be joyful. They are joyful with the saints there.

Interviewer: Praise God for your safety, my mother.

Samia: Thank you, my son.

Interviewer: Thank you that you gave me time to sit with you even though you are hurt and in the midst of your pain and hurt and you gave space to speak to us.

Samia: May God comfort you and bless you all.

Interviewer: What do you say to all the people, all your children who are watching you now?

Samia: I say may God protect them and give them grace and blessing and peace and to live in the fear of God.

Interviewer: what is your injury?

Samia: Here in my side, here in my thigh.

Interviewer: How many bullets?

Samia: I don’t know how many.

Interviewer: Thank God for your safety.

Samia: Thank you, dear. May God be with you.

Interviewer: I hope we hear. Today, our mother is telling us, or God is telling us, this is the doctrine that you called “corrupt”. God is showing us some of its corruption. So, what is this corruption? “God forgive you”! “Forgive them, Father, for they do not know what they are doing.” “Lord, do not charge them with this sin.” This is the doctrine, by the way. The words that I am saying now are from the heart of the Christian doctrine, from the heart of the Bible.

I don’t mean to make this about doctrine, but unfortunately it is. Who did he go to kill? He went to kill the Christians. Where were they going? The monastery. But, by the way, he is a coward. You are a coward. Do you know why you are a coward? Because you attack people who were, first of all, unarmed and every time you heard the name of God, you hit them more. Why? I don’t know. So, then what do you think that is? A kind of manliness? A kind of love? At the end, you distribute books that say “accepted fast”? What else do you want to do? You want to divide Egypt? Ok, I am sure that there is something political, but there is something doctrinal. Why the Christians?