The New Age of Christian Martyrdom - Ushered in by U.S. Leadership 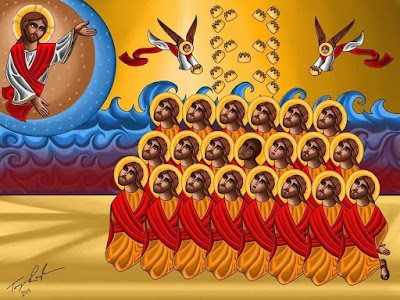 It should grieve and burden us all to the depth of our souls that our freely elected government is directly responsible for unleashing the bloody wave of Islamic jihad and the New Age of Christian Martyrdom.  In our days, "rendering unto Caesar" results in our Christian brothers and sisters being tortured, raped, sold into slavery, and killed, all for their faith in Christ. God have mercy on us all...


Wherever U.S. leadership has helped Islamic jihadis topple secular autocrats in the name of “democracy and freedom,” indigenous Christian minorities are being forced to convert to Islam or die.


Many are accepting death.

Most recently, on August 28 near Aleppo, the Islamic State (IS or ISIS) tortured, mutilated, publicly raped, beheaded and crucified 12 Christians for saying “they would never renounce Christ” for Muhammad.

The jihadis took one group in front of a large crowd.  They cut off the fingertips of a 12-year-old boy, who steadfastly refused to submit to Islam.  They “severely beat him, telling his father they would stop the torture only if he, the father, returned to Islam.”  He refused, so they “also tortured and beat him and the two other ministry workers. The three men and the boy then met their deaths in crucifixion.”

According to a Christian leader associated with the martyrs, “They were left on their crosses for two days. No one was allowed to remove them.”  A sign saying “infidels” was placed next to their crosses.

The other eight Christians, including two women aged 29 and 33, were also ordered to renounce Christ and embrace Islam before a large crowd.  They refused:

The Islamic extremists then publicly raped the women, who continued to pray during the ordeal, leading the ISIS militants to beat them all the more furiously.

As the two women and the six men knelt before they were beheaded, they were all praying.

After they were beheaded, their bodies were hung on crosses, the ministry director said, his voice breaking.

The same is happening in the two other Arab nations where the U.S., under the pretext of “freedom and democracy,” overthrew the secular dictators who had long kept a lid on the jihadis: Iraq and Libya.

Late last year, Andrew White, an Anglican priest known as the “Vicar of Baghdad,” recounted the horrific atrocities Christians in Iraq are suffering—including seeing their children chopped in half for refusing to embrace Islam.  One of his anecdotes follows:

ISIS turned up and they said to the [Christian] children, “You say the words [shehada, convert to Islam], that you will follow Muhammad.”

It should be noted that the targeting of Christian children in Iraq goes back soon after the ousting of Saddam Hussein.  In June 2008, a Canadian parliamentary committee heard about how “militant Muslims” were crucifying Christian children: “Since the war began in 2003, about 12 children, many as young as 10, have been kidnapped and killed, then nailed to makeshift crosses near their homes to terrify and torment their parents.”

In one of his Facebook postings, White, who regularly posted pictures of Christian martyrs, wrote:

Today’s Pictures are too awful to show.  You know I love to show photos but the photo I was sent today was the most awful I have ever seen.  A family of 8 all shot through the face laying in a pool of blood with their Bible open on the couch. They would not convert it cost them their life.

White also told of how Islamic State members came to a Christian man saying, “Either you convert to Islam or we kill all your children.”  The desperate father declared the words, the shehada, that “There is no god but Allah and Muhammad is the messenger of Allah,” thus becoming a Muslim.

Contrite at heart, he phoned White crying, “Father, father, I said the words! Does that mean Jesus doesn’t love me anymore?  I’ve always loved Jesus but I said those words because I couldn’t see my children being killed!”

Aside from the numerous historic accounts of Christians slaughtered for refusing to renounce Christ for Muhammad—whether 100,000 Georgians beheaded or burned alive, or a “mere” 813 Italians decapitated—even in the very details, precedents abound: for example, remorse at converting out of fear.  Consider the following account from Medieval Egypt:

In 1389, a great procession of Copts who had accepted Muhammad under fear of death, marched through Cairo.  Repenting of their apostasy, they now wished to atone for it by the inevitable consequence of returning to Christianity. So as they marched, they announced that they believed in Christ and renounced Muhammad. They were seized and all the men were beheaded one after another in an open square before the women. But this did not terrify the women; so they, too, were all martyred (Crucified Again, pgs. 113-114).

Speaking of Egyptian martyrs, we come to the third “liberated” Arab nation where Christians are now being put to the sword for refusing to renounce Christ: Libya.

Earlier this year, the Islamic State released a video depicting 21 Egyptian Christians being decapitated in Libya.  While holding their victims’ bodies down, Islamic State members shoved their fingers in the Christians’ eyes, craned their heads back, and sliced away at their throats with knives.  As with the recent public rape, beheading, and crucifixion of those 12 Christians near Aleppo, some of the Egyptian Copts were also seen praying to Christ.  One Coptic priest later described the scene as follows:

The name of Jesus was their last word….  With that name, whispered at the very last, their martyrdom was sealed.

Over one month before the video appeared, the BBC had falsely reported that the majority of those now slaughtered Copts were “released.”  Sadly, such downplaying of Muslim persecution of Christians is standard for the BBC.

When the Islamic State released another video in April of more Christians in Libya being massacred, a masked IS spokesman addressed “Christians everywhere”:

We say to Christians everywhere, the Islamic State will expand, with Allah’s permission.  And it will reach you even if you are in fortified strongholds. So whoever enters Islam will have security…. But whoever refuses will see nothing from us but the edge of a spear. The men will be killed and the children will be enslaved, and their wealth will be taken as booty. This is the judgment of Allah and His Messenger.

The next scene portrays captive Ethiopian Christians being shot in the back of the head or having their heads carved off.

As Russian President Vladimir Putin recently said before the United Nations, while addressing those nations that supported the “Arab Spring,” chief among them America:

Instead of the triumph of democracy and progress, we got violence, poverty and social disaster — and nobody cares a bit about human rights, including the right to life.  I cannot help asking those who have forced that situation: Do you realize what you have done?

Whether they realize it or not, they continue to do it in Syria—with Christians paying the highest price.[i]

[i] Aside from the Islamic State’s slaughter of Christians who refuse to convert to Islam, Muslim individuals, mobs, terrorists, and governments all around the world have been known to try to force Christians to convert, sometimes on pain of death.  Some anecdotes follow: