As I saw this title in my feed for Pravmir this morning, I had a sense about it, and knew I had to read it right away. Please bear with my introductory remarks.

As I absorbed Fr Stephen's thoughts on scandal, it took me back to one of the most scandalous things I had ever encountered in my life in the Orthodox Church. It was the day in the summer of 2008 that I opened up a thin booklet by an Orthodox priest and professor, written to be "a guide for Orthodox Christians encountering Muslims," and read this: 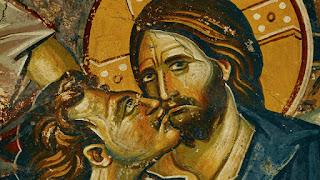 The shock of reading such a statement, written by an Orthodox Christian priest, one who celebrates the Divine Liturgy, the Eucharist, and who is charged with defending the Church and the Holies with his very life, left me reeling. It was a scandalon — σκάνδαλα — as devastating and unbelievable as any I had encountered. And it started me on the path which would lead to me writing the book, Facing Islam, and then launching this blog.

That scandal set me on this path to refute the lie that says the God of Islam is the True God, for that is what one is saying, when one makes the above assertion.

That scandal compelled me to bear witness to the Way, the Truth, and the Life, the Lord Jesus Christ, the Word of God, Second Person of the Holy Triune Godhead, who became man for our sake, to restore us to the Father, to our divine calling as children of God.

The irony of that initial scandal is that while I recall vividly the reaction it provoked within me, and the torrent of righteous fervor it unleashed, over the years since, I have come to see my inner reaction to the many scandals caused by Islam and those who defend it — especially those Orthodox Christians who are so confused in their theology, ecclesiology and their notion of love as to affirm Islam itself — to become progressively more pensive, pained, sorrowful, and less angry, defensive, polemical.

Christ calls us to love our enemies, to forgive seventy times seven. This means, in the most stark and challenging context, to love and forgive the Muslim jihadist who is sawing our head off with a serrated knife. We have examples of Holy New Martyrs in our very day (and of their grieving families in the aftermath) doing exactly that.

I have often quoted the words of Yuri Maximov (now Priest George) regarding the towering, prophetic example of New Priest-Martyr Daniil Sysoev of Moscow (†2009), and will do so again and again, for his words are perhaps the best summation of what my book, blog and mission are all about:

Among those who call themselves Orthodox, I have met such strange people who say that Fr. Daniel should not preach to Muslims, that one must respect their religion, and that there is no benefit from his preaching. But Fr. Daniel thought, as did the Lord, the Apostles, and all the saints, that one must respect mistaken people but not their mistakes. Truth is one, that which contradicts and negates truth is a lie, and respect for a lie is contempt for the truth. (Source)

Scandals must come, but it is often scandals which prove and test us, and most sharply delineate Truth from falsehood, Light from darkness, the True Way from the way to perdition.

Brothers and sisters, let us confess Jesus Christ and labor to be found in Him, that we may rejoice at His Coming, and not be ashamed. This is the True Faith. Amen.

Church Scandals Must Come
by Fr. Stephen Freeman, Glory to God for All Things, October 20, 2012

These are the words of Christ. He tells us that scandals are not only likely to happen – but that they will happen. They are necessary (ἀνάγκη).

Most readers will marvel that this is a quote from Jesus. The reason is simple: the Greek (ἀνάγκη γάρ ἐστιν ἐλθεῖν τὰ σκάνδαλα) is rarely translated in such a manner. “Stumbling blocks,” or “offenses,” is the more common way to render the word skandala (σκάνδαλα). But the Greek has a very simple cognate in English: scandal.

Why would Christ tell his disciples that scandals must come? It is a description of the nature of things in this world. The entrance of the Kingdom of God and its dwelling among men is not such that men will cease to be broken or evil. Christ warned His disciples that he himself would be betrayed – not by strangers – but by one of them!

And this has ever been the case. From the earliest days of the faith, disciples have been betrayed, misled, robbed, deceived, cheated, taught falsely, raped and abused. There has never been an idyllic season of the Church when such scandals have been absent. In Western Europe where various reform movements have remade Christianity repeatedly – circumstances have presented scandals needing attention – but reforms have never succeeded in ending them. Christ’s words remain true regardless.

Of course, no religious group is free of scandal – I am not as familiar with those of others as I am of our own – but everybody’s got them. And the non-religious are as scandal-ridden as the religious. Hypocrisy is equal opportunity. The problem does not lie within religion or its absence – it is an inherent part of the human condition.

What of Christ’s words? Are scandals part of some Divine Plan? I think that would take his words in the wrong way. The passage begins with the warning, “Woe to the world because of scandals!” and concludes, “Woe to that man by whom the scandal comes!” Of course, the great scandal, is the “falling away,” warned of by Christ and the apostles.

[Christ, speaking of the time of great troubles] And then many will be scandalized, and will betray one another, and will hate one another (Matt. 24:10).

[speaking of the coming of Christ] Let no one deceive you by any means; for that Day will not come unless the falling away comes first… (2 Thess. 2:3)

We can speculate about the internal nature of the great scandal or the falling away. But there is no New Testament version of the Christian faith that does not contain this aspect. It is part of the most primitive layer of Apostolic Tradition. It is part of Christ’s own teaching.

My experience as a Christian has been that everything “rhymes” with the larger picture of the faith. We can speak about the “last days,” and waste time speculating about such things. But Christian history has been replete with days that fit the pattern offered for those times. There is no Christian journey that is without scandal and a falling away. If we do not fall away, it is not because it never crossed our mind. Everyman in the course of a lifetime has the chance to be Peter or Judas.

If there is an inner necessity to the scandal, it is not within the scandal itself. The inner necessity is within us. The temptation that accompanies scandal is something that must be faced and overcome. Apparently, we cannot enter the kingdom of God without it.

Scandal (a “cause of stumbling”) comes in many forms. It can be as bold as corruption in the hierarchy, or moral turpitude within a priest. It can also be a prayer that we perceive to have been unanswered or God’s strange absence when we thought we could count on him. Anything that causes us to lose heart, to quit, to abandon the journey qualifies as scandal.

We admire the great martyrs and the courage of their suffering. But in most lives, suffering has a very banal quality: it offers us little chance to play the hero. I am very fond of the books on the life and work of Father Arseny. His stories are those of a saint in the Soviet Gulag. Some of the stories are quite miraculous, but most are born of the grace-filled ability to bear the innumerable indignities of a single hour, day after day. Such martyrdom over a period of decades is frightfully boring and tedious. And it is the boredom and tedium that become the scandal that he endured.

Scandal tests and proves the life of the heart. A life lived in the mind (thoughts and emotions) will endure scandal only with the greatest difficulty. Whatever the insult created by an actual scandal, the mind and the emotions will magnify it, rehearse it, argue with it, judge it, replay it repeatedly, become angry and despondent. The work of the mind is much harder to bear than the scandal itself. We are scandalized by our own passions.

The heart does not seek to judge. It understands the nature of righteousness and is not surprised by the presence of sin.

However, I take heart that Christ’s warning concerning the scandal that must come offers no condemnation for those who fall. His truly serious warning is for the one through whom the scandal comes. We all fall (at least everyone I know falls). I pray that when I stumble, I take no one with me. God give us grace.

I find these two prayers (from Orthodox Daily Prayers) to be of great help:

Save, Lord, and have mercy on those who hate and offend me, and do me harm. Do not let them perish because of me.