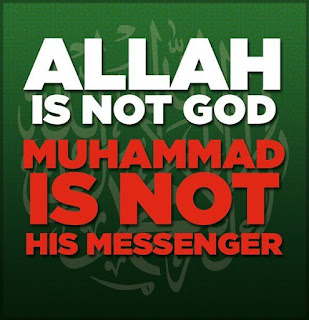 Not where I was this week, where much knowledge is being shared.

This past Tuesday I was the guest speaker at a monthly parish study group on Islam. It was a great experience, and I commend founders/organizers John and Bill for doing this important work, all on a volunteer basis.

We had some excellent discussions, with everyone in the group sharing some piece of news or information which they had gathered since the September meeting.

Launched about a year and a half ago, the group has studied a wide range of materials to learn more about Islam and the challenges it poses for the West generally and Orthodox Christians in particular. They are currently watching in serial form a BBC documentary on the life of Muhammad, and comparing it to actual Islamic source texts, including the Koran, the Sira, and the hadiths, in order to give a complete picture.

I strongly encourage Orthodox Christians who are seeking to do something to educate themselves and their brothers and sisters to replicate this concept and create a study group. There are literally 4-years' worth of material right here on this site:


You can do this. You need to do this.

As something of a follow-up to our discussions from Tuesday night, here is a brief survey, with links for further reading, on key topics we covered:

Refuting the Same God Heresy: See this post, The New Iconoclasm and the Triumph of Orthodoxy. There are many other posts which you can explore by entering "Same God Heresy" into the Search field. Of course, my book, Facing Islam, was written primarily to destroy the satanic heresy which asserts that Allah of Islam is the same as the True God. Order it from my online store and prepare yourself for the trials ahead.

The New Martyrs of the 21st Century and the Christian response to the Islamic State: See this repost of an important article by Mark Durie, one of the most important Christian writers on Islam of our age: Bearing the Cross — A Letter to the Islamic State. I also strongly recommend exploring the many posts here related to martyrdom, especially those treating the Coptic Martyrs. These alone can change your life.

Forgiveness: Islam is a false religion and Muhammad a false prophet, as St John of Damascus called it, the "forerunner of the antichrist." This is so because the Koran explicitly denies the divinity of Jesus Christ, denies the Blessed Trinity, denies even the historical fact that Jesus was crucified, per these verses:

In blasphemy indeed are those that say that God is Christ the Son of Mary. (Sura 5:19)

Christ the son of Mary was no more than an Apostle; many were the apostles that passed away before him. His mother was a woman of truth. They had both to eat their (daily) food. See how God doth make His Signs clear to them; yet see in what ways they are deluded away from the truth! (Sura 5:78)

The Jews call 'Uzair a son of God, and the Christians call Christ the Son of God. That is a saying from their mouth; (in this) they but imitate what the Unbelievers of old used to say. God's curse be on them: how they are deluded away from the Truth! (Sura 9:30)


Orthodox Christians implicitly reject these demonic lies of Islam with every confession of the Holy Trinity and of Jesus Christ as the Only-Begotten Son of God.

At the same time, Christ commands us to "Forgive seventy-times-seven", and to "Love your enemies; bless those who curse you, pray for those who spitefully use and persecute you."

So there is a challenging spiritual principle here: we confess (and hopefully live) the Way, the Truth and the Life, and in so doing, without even having to explicitly name it, reject the lies and falsehood of Islam, while at the same time forgiving our Muslim persecutors, and loving our Muslim neighbors, and when the opportunity presents itself, blessing them with the Gospel of Life, of New Life in Jesus Christ.

The Koran curses Christians, but we Christians love and bless Muslims and pray for them, in the words of St Silouan the Athonite, "that they may come to know Jesus Christ through the Holy Spirit."

See this powerful article on Forgiveness: 'Let Us Forgive All, By The Resurrection'.


Living an Authentic Christian Life: To close this post, I offer these words of exhortation from Fr Daniel Byantoro, Founder of the Indonesian Orthodox Mission, and from Blessed Hieromonk Seraphim Rose (†1982):

"I think it is very important for Christians to wake up and return to their roots, to be serious about their faith, and to try to share that faith with Moslems. This is the greatest defense against Islam."

"Christian compromise in thought and word and negligence in deed have opened the way to the triumph of the forces of the absurd, of Satan, of Antichrist. The present age of absurdity is the just reward of Christians who have failed to be Christians.

"It is futile, in fact it is precisely absurd, to speak of reforming society, of changing the path of history, of emerging into an age beyond absurdity, if we have not Christ in our hearts; and if we do have Christ in our hearts, nothing else matters.

"Now one cannot be a half-hearted Christian, but only entirely or not at all."