"Islamic luminaries say the American Muslim community would rather live under a theocracy. 'Every Muslim who is honest would say, I would like to see America become a Muslim country', says Imam Zaid Shakir, co-founder of Zaytuna College in Berkeley, Calif." 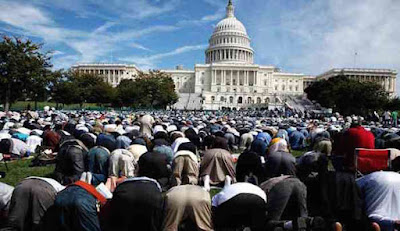 “I just don’t know any Muslim-Americans — and I know plenty — who feel that way, even if they are observant Muslims,” he scowled.

Tapper doesn’t get out much. If he did, chances are he’d run into some of the 51% of Muslims living in the U.S. who just this June told Polling Co. they preferred having “the choice of being governed according to Shariah,” or Islamic law. Or the 60% of Muslim-Americans under 30 who told Pew Research they’re more loyal to Islam than America.

Maybe they’re all heretics, so let’s see what the enlightened Muslims think.

If Tapper did a little independent research he’d quickly find that America’s most respected Islamic leaders and scholars also want theocracy, not democracy, and even advocate trading the Constitution for the Quran.

These aren’t fringe players. These are the top officials representing the Muslim establishment in America today.

Hopefully none of them ever runs for president, because here’s what he’d have to say about the U.S. system of government:

These Islamic luminaries, who arguably spend more time with Muslims than Tapper, say the American Muslim community would rather live under a theocracy.

"Every Muslim who is honest would say, I would like to see America become a Muslim country," Shakir said.

Why? Because Islam preaches that Allah's laws are superior to man-made laws and therefore requires the faithful to not only convert others, but also establish Islamic rule over others.

In this, Islam is unique.

It's a key departure from Christianity, for one, which instructs followers to respect secular leaders — rendering "unto Caesar what is Caesar's" — while living godly lives within secular societies.

So for devout Muslims, the Quran is more than just a holy book. It's a blueprint for government.

While Tapper's ignorance is breathtaking, it's par for the course for the inside-the-Beltway crowd.

The Washington punditry continues to harbor dangerously naive assumptions about Islam, which only emboldens Islamic supremacists growing exponentially within our borders.
_____