Europe and the U.S. are both set to bring in hundreds of thousands of these refugees over the next two years. 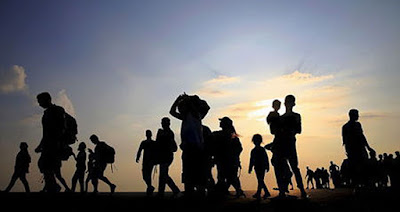 The fanatical jihadis are sending teams of trained killers into camps disguised as refugees to kidnap and kill vulnerable Christians.

But refugees are terrified to report many of the killings in case they are targeted next, according to aid workers.

The horrifying tactic emerged after one terrorist got cold feet and renounced jihad after witnessing Christians helping out other refugees within the camp.

He then revealed that he had been sent with an Islamist hit squad to eliminate Christians as part of the hate group’s ideological drive to wipe the religion off the map….

An aid worker at a Unite4d [sic] Nations (UN) run camp in Jordan, who did not wish to be named for fear of reprisals, revealed that the jihadis are also kidnapping young refugee girls to sell on as sex slaves.


He said: “The Muslim gangs come as refugees, but they have their agendas.

“They’re like a mafia. People are even killed inside the camps, and the refugees are afraid to say if they saw somebody get killed. If you ask them, they’ll say, ‘I don’t know, I was asleep.'”

Britain has pledged to take 20,000 people in from such camps in the last five years….

The aid worker told the Christian Post: “The last time I went inside a camp, I had a policeman with me.

“The camps are dangerous because they have IS, Iraqi militias and Syrian militias. It’s another place for gangs.

“They’re killing inside the camps, and they’re buying and selling ladies and even girls.”