UK: Christian school 'downgraded for failing to invite an imam to lead assembly'

The collapse of formerly Christian Britain accelerates as forced Islamization of private, independent Christian schools is aggressively promoted by the UK government. 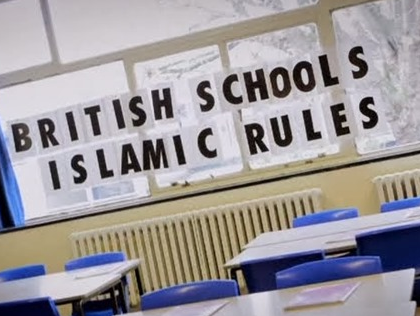 Are any Islamic schools being downgraded for failing to invite Christian priests or ministers to lead assemblies? Doubtful in the extreme. In the wake of the Trojan Horse takeover plot of British state schools (see here, here, here, here and here), British authorities appear to have decided that the remedy is to further the Islamization of schools. They appear intent on rushing their nation toward civil strife and disintegration.

“Christian school ‘downgraded for failing to invite an imam to lead assembly,'” by John Bingham, the Telegraph, October 19, 2014:

A successful Christian school has been warned it is to be downgraded by inspectors and could even face closure after failing to invite a leader from another religion, such as an imam, to lead assemblies, it is claimed.

The small independent school in the Home Counties was told it is in breach of new rules intended to promote “British values” such as individual liberty and tolerance in the wake of the Trojan Horse scandal, involving infiltration by hard-line Muslim groups in Birmingham.

Details of the case are disclosed in a letter to the Education Secretary, Nicky Morgan, from the Christian Institute, which is providing legal support to the school.

The group warned that the new rules intended to combat extremism are already having “disturbing consequences” for religious schools and forcing Ofsted inspectors to act in a way which undermines their ethos.

It follows complaints from orthodox Jewish schools about recent inspections in which girls from strict traditional backgrounds were allegedly asked whether they were being taught enough about lesbianism, whether they had boyfriends and if they knew where babies came from.

In the latest case inspectors are understood to have warned the head that the school, which was previously rated as “good” that it would be downgraded to “adequate” for failing to meet standards requiring it to “actively promote” harmony between different faiths because it had failed to bring in representatives from other religions.

They warned that unless the school could demonstrate how it was going to meet the new requirements there would be a further full inspection which could ultimately lead to it being closed.

A Government consultation paper published in June, explaining the new rules, makes clear that even taking children on trips to different places of worship would not be enough to be judged compliant.

The Institute, which is already planning a legal challenge to the consultation, arguing that it was rushed through during the school holidays, fears that the new guidelines could be used to clamp down on the teaching of anything deemed politically incorrect on issues such as marriage.

“Worryingly, evidence is already emerging of how the new regulations are requiring Ofsted inspection teams to behave in ways which do not respect the religious ethos of faith schools,” Simon Calvert, deputy director of the Christian Institute, told Mrs Morgan.

“The new requirements are infringing the rights of children, parents, teachers and schools to hold and practise their religious beliefs.”

Listing recent cases involving criticism of Anglican, Roman Catholic and Jewish schools by Ofsted, he added: “The Christian Institute is currently working with an independent Christian School which has been marked down by Ofsted for not promoting other faiths.

“Astonishingly it was told it should invite representatives of other faith groups to lead assemblies and lessons, such as an Imam.

“The wording of the regulations inevitably results in these kind of outcomes.

“While we obviously support attempts to address the problem of radicalisation, the current regulations fail to do this.”…