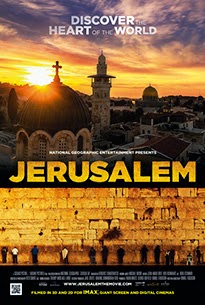 "We rarely hear of the Muslim conquest of Jerusalem. The Muslims did not inhabit Jerusalem peacefully or by way of invitation in the 7th century.  If the Crusades are always criticized for that very reason, we need to restore a sense of historical balance..."


'JERUSALEM' - The Omnimax Film
Observations by an Orthodox Christian Priest, followed by my comments.
October 20, 2014
(Source confidential and shall remain anonymous)
Visit the website for the film to view the trailer and find showtimes in your area.

...The commentary [of the film] was clearly made to be as non-controversial as possible. In fact, although paying a bit of "lip service" to the endless historical conflicts that have been so much a part of Jerusalem's history, the text of the commentary was committed to convincing us that Jews, Christians, and Muslims can live openly and peacefully in such close proximity.

Fair enough. In today's fractured and conflict-torn world, we should realize by now that profound differences of faith and practice need not undermine the essential qualities of mutual respect and tolerance. And one does not have to be a relativist to embrace such a perspective.

The more that a believer is secure in his/her own faith, the more this could become a reality underlying human relationships. After all, we are not talking about winning a religious debate, but simply about living together peacefully. Fanaticism and aggressive non-tolerance of the "other" could serve as cover-up for a deeper insecurity, in which the "enemy" is anyone with a world-view challenging and/or shaking that of the intolerant believer. And enemies must be destroyed before they tempt "our people" into deviating from the group's beliefs. Again, I am simply raising this issue on the religious level - and not on a political level and the use or non-use of force...

And to abandon all political correctness, I must point out that we rarely hear of the Muslim conquest of Jerusalem. The Muslims did not inhabit Jerusalem peacefully or by way of invitation in the 7th c. If the Crusades are always criticized for that very reason, we need to restore a sense of historical balance...
_______

These are brave and important points to make, and I hope more Orthodox come to embrace the sober and fair-minded firmness inherent in this priest's remarks above.

But there is a more ominous point to be made, namely that one religion in particular seems to have just such a "deeper insecurity" innate to its spiritual DNA, as witnessed by such extracts from its holy book as these:

Fight against those who believe not in Allah, nor in the Last Day, nor forbid that which has been forbidden by Allah and His Messenger and those who acknowledge not the religion of truth [i.e. Islam] among the people of the Book [Jews and Christians], until they pay the jizya with willing submission, and feel themselves subdued. (Quran 9:29)

Kill the mushrikun [unbelievers] wherever you find them, and capture them and besiege them, and prepare for them each and every ambush. (Quran 9:5)

Against them make ready your strength to the utmost of your power, including steeds of war, to strike terror into the enemies of Allah and your enemies. (Quran 8:60)

So, when you meet those who disbelieve, smite at their necks till when you have killed and wounded many of them, then bind a bond firmly on them... Thus you are ordered by Allah to continue in carrying out jihad against the disbelievers till they embrace Islam. (Quran 47:4)


The founder of this same religion consistently revealed his own "deeper insecurities" by his own "fanaticism and aggressive non-tolerance" towards those opposed to his creed, as seen in this incident from the earliest authorized account of his life:

Then they [the Jewish tribe of Qurayza] surrendered, and the apostle confined them in Medina in the quarter of d. al-Harith, a woman of Bani al-Najjar. Then the apostle went out to the market of Medina and dug trenches in it. Then he sent for them and struck off their heads in those trenches as they were brought out to him in batches. Among them was the enemy of Allah Huyayy bin Akhtab and Ka’b bin Asad their chief. There were 600 or 700 in all, though some put the figure as high as 800 or 900. As they were being taken out in batches to the Apostle they asked Ka’b what he thought would be done with them. He replied, ‘Will you never understand? Don’t you see that the summoner never stops and those who are taken away do not return? By Allah it is death!’ This went on until the Apostle made an end of them.


That the commands of the Quran are considered by Muslims to be the literal words of Allah existing pre-eternally in the "Mother of the Book" in heaven, and that Muhammad is considered by Muslims to be the "perfect man" and — according to the words of the Quran — "the most beautiful pattern of conduct," makes it likely that there will always be devout Muslims who feel divinely commanded to wage war against Christians and Jews and other non-Muslims. They consider themselves to be secure in their faith, not "deeply insecure," and they prove their faith by their literal application of the commands of Allah and their literal imitation of the example of their prophet.

It seems to be working, as the Islamic State Caliphate (ISIS/ISIL) is becoming increasingly popular among Muslims in the West, who are flocking to Iraq and Syria to join ISIL and wage jihad. ISIL is equally popular among other Muslim jihadist extremist groups, as seen in the list of pledges of allegiance to the Islamic State by the Taliban, Al Qaeda offshoots, and others throughout the Muslim world.

And, by the way, the Islamic State Caliphate has targeted Jerusalem for takeover. Should that happen this Omnimax film would probably turn out to be the last documentary on Jerusalem able to be filmed by a non-Muslim group.