To be broadcast live via satellite feed, antenna satellite TV network, and Internet simulcast on the special internet page at www.stnicholaswtc.org. 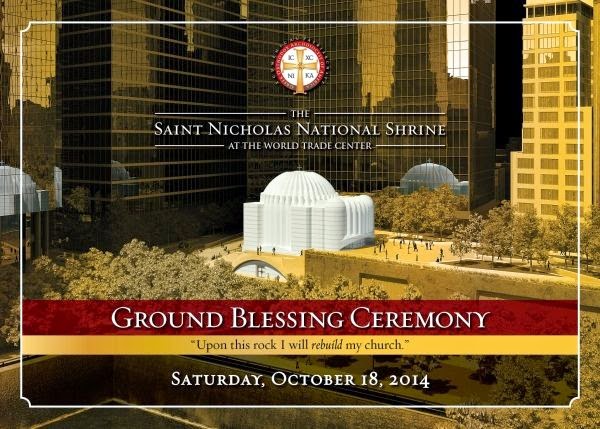 "Established in 1916, the small Greek Orthodox Church of Saint Nicholas was the only house of worship destroyed [by Muslim jihad terrorist attacks] on September 11, 2001, when the South Tower fell and completely obliterated the old church edifice. The new Saint Nicholas National Shrine will be rebuilt only a short distance away from its original location, at 130 Liberty Street, and will overlook the 9/11 Memorial."

It is highly significant that the St Nicholas Church is finally being rebuilt, and will become such a key landmark in the larger 9/11 WTC memorial area. May it be blessed, and may the new St Nicholas Orthodox Church (styled as a 'National Shrine' to provide enough secular cover for it to be partly funded by public monies) be a bright and beautiful witness to Orthodox Christianity in America.

At the same time, we must prepare ourselves to endure the predictable tributes to Islam issuing forth from both church and civic leaders tied to the project, declaring how Islam was not responsible for the 9/11 jihad attacks, etc., but does anyone really doubt that devout Muslims are already envisioning the St Nicholas National Shrine surrounded by minarets, and targeting it for takeover and conversion into a mosque?