Islamic State’s magazine shows its flag flying over the Vatican 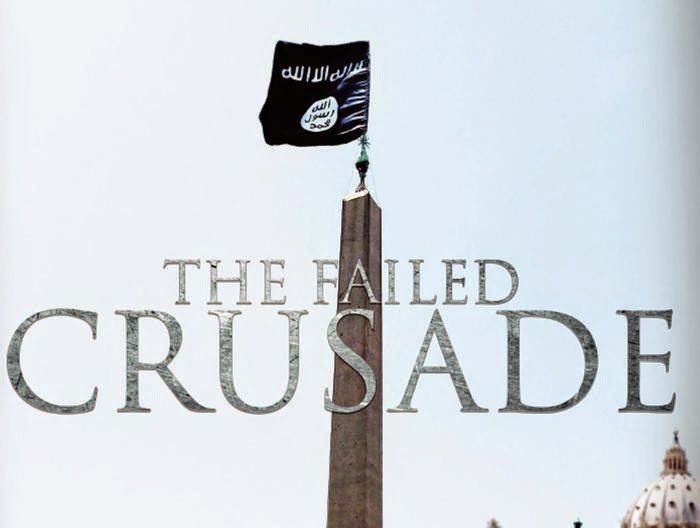 The Islamic State — extremists! No other Muslims think this way, right?

Sheik Ali Al-Faqir, former Jordanian minister of religious endowment, said this on Al-Aqsa TV on May 2, 2008: “We proclaim that we will conquer Rome, like Constantinople was conquered once…”

Hamas MP and Islamic cleric Yunis Al-Astal said this, also on Al-Aqsa TV, on April 11, 2008: “Very soon, Allah willing, Rome will be conquered, just like Constantinople was, as was prophesized by our Prophet Muhammad.”

Sheikh Yusuf al-Qaradawi, the most prominent and renowned imam in the world, in writing about “signs of the victory of Islam,” referred to a hadith: “The Prophet Muhammad was asked: ‘What city will be conquered first, Constantinople or Romiyya?’ He answered: ‘The city of Hirqil [i.e. the Byzantine emperor Heraclius] will be conquered first’ – that is, Constantinople”¦ Romiyya is the city called today ‘Rome,’ the capital of Italy. The city of Hirqil [that is, Constantinople] was conquered by the young 23-year-old Ottoman Muhammad bin Morad, known in history as Muhammad the Conqueror, in 1453. The other city, Romiyya, remains, and we hope and believe [that it too will be conquered]. This means that Islam will return to Europe as a conqueror and victor, after being expelled from it twice – once from the South, from Andalusia, and a second time from the East, when it knocked several times on the door of Athens.” And last May a Kosovar Muslim in Iraq said: “We shall conquer Jerusalem from you, oh Jews! We shall conquer Rome and Andalusia, Allah willing.”

(ANSA) – Vatican City, October 13 – The black flag of Islamic militant group ISIS is shown flying above St. Peter’s Square on the cover of the group’s magazine Dabiq, which called in its latest issue for a war against the Catholic Church.


With the headline The Failed Crusade, the photo-shopped cover of Dabiq caps new threats against Rome and the Vatican as well as forces led by the United States in a bombing campaign in Iraq and Syria against ISIS militants.

It threatens to “conquer” Rome and “break your crosses,” referring to the symbol of Christianity.
The group has previously suggested that the fight is about religion and western forces are attacking the Islamic faith rather than the militants – a modern version of the medieval Crusades that pitted the Roman Catholic Christians of the day against Islam. The article in Dabiq – named for a town in northern Syria – also urged faithful Muslims to attack and kill “every Crusader possible” and added that “it is lawful to kidnap the women of the infidels and use them as sex slaves”.

Last month, security officials said that they had stepped up security at the Vatican following threats by ISIS, which wants to establish an Islamic Caliphate. This marked the fourth issue of Dabiq, which is published in English.