"About 20,000 of them are jihadists from all over the world... [with] several thousand fighters from the UK, France, Germany and other Western nations." 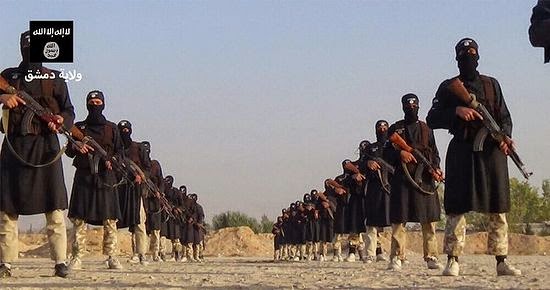 ISIS militants control about 40% of Iraq and 30% of Syria and affiliated structures are seizing lands from Somalia and Sudan to Nigeria and inner districts of Sahara, Institute for Middle East Studies President Yevgeny Satanovsky said.

"ISIS is not just a radicalized organization, it is also rich. It controls oil fields and gains $2 million daily from oil contraband. It makes tens of millions of dollars in abducting foreigners for ransom. It robs banks and plants on seized territories; it is also involved in trafficking in human beings and sells women whose husbands have been killed or banished," Argumenty I Fakty cited Satanovsky as saying on Wednesday.

"This is a new, totally cruel jihad. Absolutely medieval barbarity multiplied by the power of contemporary weapons," he said. "In Mosul, Iraq alone ISIS militants have seized tens of billions of dollars-worth of weapons, everything abandoned by Obama who left Iraq to the mercy of fate. Nowadays ISIS has 80,000-100,000 fighters, and about 20,000 of them are jihadists from all over the world. The largest units come from Morocco and Yemen, there are also lots of Egyptians, Algerians and Libyans. Some 2,000 fighters have come from Russia: about 1,500 Chechens, 200 Dagestanis, there are also Ingushetians and some others," the expert said.

Besides, ISIS has several thousand fighters from the UK, France, Germany and other Western nations.

"Sadists from all over the world, from Australia to Sweden, have gone there; they want to cut off heads and commit other atrocities with impunity. They have plenty of weapons, and the area is very easy to reach, for instance, across the Turkish-Syrian border," the expert continued.

In turn, Semyon Bagdasarov, Director of the Center for Middle Eastern and Central Asian Studies, said ISIS was dangerous because the first-ever terrorist quasi-state had been created in the strategically important Middle East region and it possessed every power attribute - an administration, an intelligence service and an army.

"No one is controlling them and no one has been able to stop them although the forces opposing them in Iraq and Syria are eight to nine times larger! This is a proof of the highly efficient military organization of ISIS. The core of its army is former officers of Saddam Hussein, members of the so-called ISIS Military Shura led by former Iraqi Army Colonel Haji al-Bakr," he said.