Renews appeal for release of Bishops Paul and John of Aleppo. 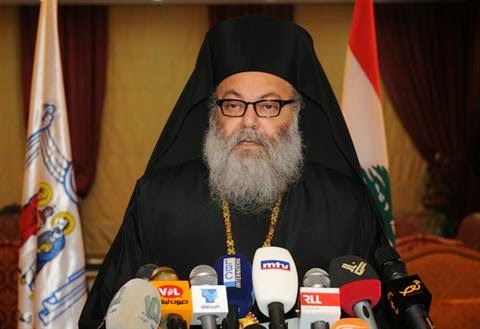 TEHRAN (FNA)- Greek Orthodox Patriarch of Antioch and All the East John X Yazigi appealed to the international community for working to bring peace to Syria through dialogue and to combat the Takfiri.

[The term "Takfiri" refers to so-called "extremist" Muslims such as al-Qaeda, al-Nusra, the ISIL, the Muslim Brotherhood, Boko Haram, who wage jihad against and seek to convert, subjugate or slaughter Christians, other non-Muslims, and those Muslims they consider to be apostates, such as  the Alawites of Syria.]

Patriarch Yazigi stressed during the opening session of ‘Civilizations at service of Humanity’ Conference held in the Bahraini capital of Manama that “Syria’s salvation can be met through openness to the other and the unity of the country’s land and common consciousness”, Syrian Arab News Agency reported.


He renewed calls for releasing all the abducted people including Aleppo Metropolitans, Bishops John Ibrahim and Paul Yazigi, “who have been abducted by terrorists for more than a year amidst silence as if their abduction has nothing to do with human rights.”

The Patriarch stressed that “The Orthodox Church has an oriental inclination, a patriotic belonging to the homeland and a commitment to Arabism…it has always been by the side of the people’s issues in the East”.

Patriarch Yazigi expressed hope that these conferences would get out of rhetorical theory and move to feasibility and action.