Christian Icons and frescoes to be shrouded in shadows and 'dark light' to avoid offending Islam.

We knew this was coming, yet it is still an immensely significant, symbolic move, which Muslims will universally see as a "second conquering" of Christendom, and even as a precursor to the restoration of the Islamic Caliphate. As I wrote back in December:


The conversion of Hagia Sophia into a mosque is an eschatological sign of our times, as pure, seventh-century Islam, that "forerunner of the Antichrist," reasserts its diabolical hold over its fervent adherents, and re-stakes its claim to global domination, ushering in a new era of bloody Muslim jihad already raging around the globe.


Here are some of my recent posts on this:

Turkey: Hagia Sofia to become half mosque and half museum
ANSAMed (Thanks to JihadWatch) — May 8, 2014 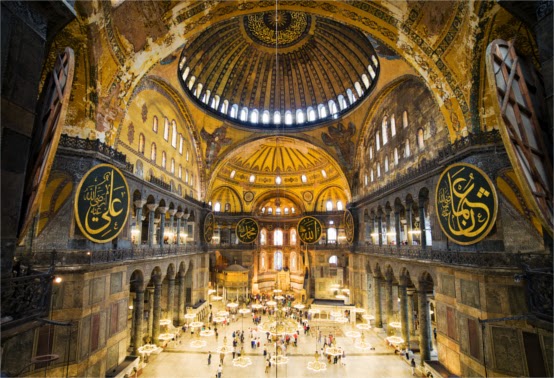 ANKARA - Prime Minister Recep Tayyip Erdogan's government plans to turn Istanbul's Hagia Sofia Basilica into a mosque in the afternoon and evening and a museum in the morning. The historical monument, which draws millions of tourists every year, will have the Byzantine frescoes covering its walls cast into shadow by 'dark light' so as to avoid offending Islam.

The government would thus like to turn what is today seen as a symbol of Christianity back into a place of worship for Muslims, as it was after the Ottoman conquest of Constantinople in 1453. Confirmation of the plan came on Thursday from the Turkish pro-government daily Yeni Safak, after press leaks last week in Radikal reported the prime minister's intention to pray in the Byzantine basilica prior to the August presidential elections, possibly as early as May 29. The date is a highly symbolic one, as it marks the 561st anniversary of the fall of Constantinople into the hands of the Ottomans. A few days later the basilica became a mosque on the orders of Mehmet II the Conqueror ad remained so until 1934, when on the decision of the father of the modern Turkish 'secular Republic Mustafa Kemal Ataturk it was made into a museum. A campaign to turn the Hagia Sofia back into a mosque has been brewing for quite some time in the country, raising alarm among Christian communities in the east. Over the past few months appeals have been made by Deputy Prime Minister Bulent Arinc and the imam of the Sultanhamet mosque, Mustafa Akgul.

The threat to reopen Hagia Sofia to Muslim worship has already led to heated criticism from Patriarch of Constantinople Bartholomew I and the Greek government. The head of the Eastern Orthodox Church warned that ''we and all other Christians will oppose it''. Athens has called it an ''insult to the religious sensibilities of millions of Christians''. Radikal reports that the risk of a strong reaction from the West is what has prevented the Turkish prime minister from going ahead with the plan thus far, as his image at the international level has already suffered quite a few blows.

Nevertheless, an Islamic-leaning MP recently submitted a formal motion in the parliament to make Hagia Sofia into a mosque. (ANSAmed).