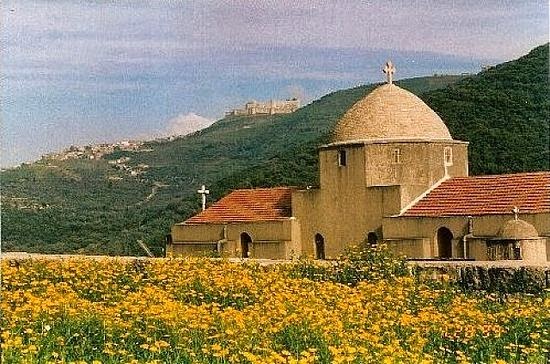 The monastery of St. George is located in Wadi-An-Nadara, or the “alley of Christians”, in the region of Tal-Kalah, sixty-five kilometers from Homs, Syria. It lies on the ancient Roman road that joins the coastal cities with the east, between Homs and Tripoli, near the famous Crusaders castle, Krak de Chevalier.

According to Arab and Western sources, the history of the monastery goes back to the sixth century, the reign of Emperor Justinian. The monastery was consecrated in honor of Great Martyr George, called by non-Christians Al-Hodr al Abbas. The monastery is possibly linked with a historical monument located nearby, or with an ancient village that was named after the pagan god of rain. Others say that the monastery was built upon the ruins of a pagan temple dedicated to the pagan god Humaira. This temple became the foundation of the St. George Monastery, and is now the first floor. If this theory is correct, then the monastery was built in the fourth century and was contemporary to the patriarchal monastery in Saidnaya. This would allow us to conclude that the Emperor Justinian built both monasteries.

According to another version, the word Humaira is the Arab transcription of the Greek word “homiros”, which means “spiritual brotherhood of common life.”


The monastery of St. George was built on a Roman civic road that connected the coastal lands with the internal cities of Homs, Palmira, and others located deeper in the desert.

The original monastery was a cave surrounded by the cells of pious monks. The main entrance from the southern side was adorned with a Byzantine façade. The gates were 93 x 64 centimeters, built around with black stone.

Next to the gates was a stone window used for distributing bread and other foods to the needy. One of the educated monks would instruct people in the Orthodox faith and morals through this window.

The second floor was built in the twelfth century, during the time of the Crusades. The entrance was built of black stone tiles of the same size as those on the first floor, and faces west. Over the entrance was a sculptured image of a cross. The gates are called the “horse gates” despite their narrowness, because they were the entrance through which horses passed. On the first floor is a church called “the Old Church” as opposed to the new church on the third floor. In the Old Church are archways and a carved iconostasis with icons from the eighteenth century, painted in the Byzantine style but with with a local flavor. The peculiarity of the local style attracts the interest of collectors, and one of the icons of St. George was stolen and sold in London for 2500 pounds. Fortunately, Interpol was able to find this icon and return it to the monastery.

In the monastery vestry can be seen potirs, trays, crosses, and other unique utensils—a priceless Christian inheritance. Among them are many manuscripts, documents, wills, and gift charters from the time of Arab domination, as well as gifts from Armenian, Georgian, and Russia rulers. The monastery is included in the list of the most important monuments of Syria. Together with the Knights’ Castle, the locality is a popular tourist attraction. People of various races and religions visit the monastery and piously bring offerings, honoring the patron saint, Great Martyr George, with thanks for the many miracles wrought through him. Photo: ComeToSyria.com.

The monastery is located in a valley surrounded by continually green hills. Nearby is a park and famous spring.

The current civil war in Syria has placed the St. George Monastery in danger. At the end of August, 2013, armed extremists attacked the monastery, but were met with resistance from volunteers of the People’s Defense Forces. Eleven Christian soldiers were killed defending the monastery, while the extremists were forced to retreat to the area of the Krak de Chevaliers castle, and did not succeed in desecrating the monastery.

[NOTE: The so-called "civil war" in Syria is actually an open jihad being waged by Sunni Muslims seeking to overthrow the Alawite Muslim regime of Bashar Al-Assad. It is not a "civil war," and most of the so-called "rebels" have come from other countries to wage jihad and impose sharia on Syia and the greater Levant. This is an expressly religious war, an Islamic jihad being fought to re-establish an Islamic caliphate.]

During Holy Week of this year (2014), a school located just a few minutes walk from the monastery received a mortar attack, which killed several children and wounded dozens.

For many years, the present Patriarch of the Orthodox Church of Antioch John X (Yazigi) was abbot of the St. George Monastery in Humaira. His brother, Metropolitan Paul (Yazigi) of Aleppo was kidnapped on April 22 in the north of Syria while on a humanitarian mission together with a companion, the Syriac Metropolitan Johanna Ibrahim. The fate of the two hierarchs is still unknown.