'Breaking of the Crosses' in North Carolina: Christian leaders welcome conversion of church into mosque

"Helping to open the mosque will be local Christian clergy, hoping to strike a welcoming and respectful tone for two faiths of similar origins in a shared community..."

"Pastor Jim Melnyk, who leads St. Paul’s Episcopal Church in Smithfield, will be one of the Christian church leaders taking part in Saturday’s ceremony. He said Christianity and Islam share common origins and scriptures..."

Common origins and scriptures???  Dhimmitude and Ignorance have kissed each other.

This pathetic, deceived 'pastor' should be severely reprimanded by his bishop, if not defrocked and excommunicated for deceiving his flock and denying Christ in such a blatant manner. Read my book Facing Islam for a clear explanation of why the 'Same God Heresy' (which this pastor Jim Melnyk undoubtedly follows) presents a "different gospel", a "different Jesus" and a "different Spirit" (cf. Gal 1:6-8 and 2 Cor 11:3-4).


Christians also need to be warned that observant Muslims see the removal of crosses from churches as a prophetic sign of the ultimate triumph of Islam over Christianity, and of Christianity's ultimate destruction. As the mosque organizer himself said:


That sense of destiny is what drives Islamic jihad, whether violent or stealth, throughout the world. It is the belief in Islam's ultimate victory over Christianity.

Islamic eschatology holds that when Isa (the Islamic Jesus) returns, he will be a “good Muslim,” and will direct his followers to the Mahdi, the Muslim messiah, before taking a subservient position somewhat behind the Mahdi. Muhammad, as related in Islamic scriptures, prophesied that Isa will “fight the people for the cause of Islam. He will break the cross, kill the swine and abolish jizya” and establish the rule of Allah throughout the world (Hadith from Sunan Abu Dawud, Book of Battles, 37:4310). 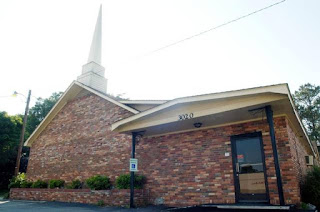 SMITHFIELD – It won’t be the first mosque in Johnston County, but for now it’s the only one.

On Saturday morning, the Islamic Center of Smithfield will open up in a vacant Pentecostal church, taking over the four-acre property and parsonage on Brightleaf Boulevard with future plans for a worship and community center and school. Helping to open the mosque will be local Christian clergy, hoping to strike a welcoming and respectful tone for two faiths of similar origins in a shared community.

Crosses have been removed from the former church’s facade and steeple, and Ali Mohammad, an organizer of the mosque and a Smithfield business owner, said they’ll be handed over to the group of pastors as a show of good faith.

“We want to be friendly with all our neighbors and let them know we’re there,” Mohammad said. “It’s open faith; we’re brothers.”

The last Johnston County mosque was in Selma, but it folded a few years ago after a series of break-ins and the imam left for Goldsboro to help open an Islamic center there. Mohammad, who owns several local strip malls and businesses that sell speakers and security systems, said he let the county’s Muslim community meet in one of his vacant store fronts, but that it was always considered temporary.

“One of our dreams was we could start a bigger Islamic center so our kids can play, we can create a small school, we can create a place for all these families to get together and hang out,” Mohammad said.

He said the group started looking for properties last year and came across the empty Pentecostals of Smithfield property, which includes a church building and a home. They bought the four-acre property last month for $230,000.

Pastor Jim Melnyk, who leads St. Paul’s Episcopal Church in Smithfield, will be one of the Christian church leaders taking part in Saturday’s ceremony. He said Christianity and Islam share common origins and scriptures and that he felt it was important to participate in the mosque opening as a sign of mutual respect.

“I see it as an important statement of community, that we take each other’s faiths seriously,” Melnyk said. “I want to acknowledge how important it is to build bridges in the community when we’re living in a time that is so anxiety ridden and there’s so much mistrust going on in the world around us. It’s important when we can find common ground and share our community.”

Mohammed, who was born in Venezuela to Jerusalem-born parents, said he made his way to Smithfield by way of Florida 20 years ago and that the Muslim community at that time was about three or four families. He said it has grown steadily over the past two decades and that he expects the mosque membership to be around 60, characterizing the families as business owners, doctors and engineers, several moved to Johnston County from out of state by their companies.

“Part of it is destiny; it’s the will of God that we’re here and we’ve done well,” Mohammad said.

Opening the only mosque in a predominantly rural Christian county while headlines of Muslim travel bans remain in the news may sound like a challenge, but Mohammad said he isn’t worried about a backlash. He said any friction in the community can be solved by getting to know one another better.

“We’re Americans,” Mohammad said. “This is my land, this is my right as an American. If a Christian or a Jew or any other culture has the right to have some kind of community center, why not us? … My faith is peaceful. It teaches us to love our neighbor and be friendly with everyone. That’s what religion teaches us.”

Melnyk, the Episcopal pastor, said there isn’t any formal plan of what to do with the crosses once they’re handed over, that maybe a church will demonstrate a need or there may be some mission that can use them. He said that the ceremony of the transfer of the church to the mosque was what he wants the public to recognize.

“They’re reaching out to be neighborly, saying we know this symbol is important to you and we want to honor it,” Melnyk said. “And it behooves us as Christians and followers of Jesus to be neighborly in response.”