Islamic FGM in Michigan - Part 5: 'FGM is illegal in the United States. So why is it still happening here?'

"Many Muslims have insisted that the practice of FGM has nothing to do with Islam, that it is, originally, an African and pagan custom. This may be true. However, many Muslims believe it is religiously required..."

This is the fifth of a 7-part series on Islam and FGM:

Robert Spencer of Jihad Watch explains why Muslims believe the barbaric practice of circumcision of the clitoris is religiously required:

Female genital mutilation is indeed sanctioned in Islam. “Circumcision is obligatory (for every male and female) (by cutting off the piece of skin on the glans of the penis of the male, but circumcision of the female is by cutting out the bazr ‘clitoris’ [this is called khufaadh ‘female circumcision’]).” — ‘Umdat al-Salik e4.3, translated by Mark Durie, The Third Choice, p. 64

Why is it obligatory? Because Muhammad is held to have said so: “Abu al-Malih ibn Usama’s father relates that the Prophet said: ‘Circumcision is a law for men and a preservation of honour for women.’” — Ahmad Ibn Hanbal 5:75


That’s why it is so common around the world: 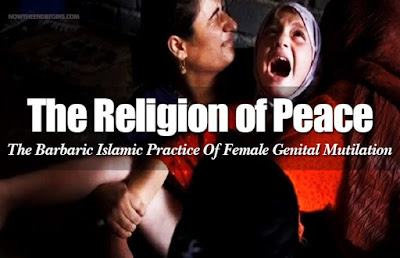 FGM is illegal in the United States. So why is it still happening here?

Let's be clear: FGM (female genital mutilation) is illegal in the United States. That fact did not stop Drs. Humana Nagarwala, Fakhruddin Attar, and his wife Farida Attar, from allegedly performing these criminal and human rights atrocities against two vulnerable 7-year-old girls in the Detroit metro area. The physicians and Attar's wife have all been arrested. According to Fox 2 News in Detroit the three have been charged with female genital mutilation and conspiracy. The doctors are also charged with making false statements to investigators and trying to obstruct the investigation.

For years, many Muslims have insisted that the practice of FGM has nothing to do with Islam, that it is, originally, an African and pagan custom. This may be true. However, many Muslims believe it is religiously required.

Boldly, cleverly, the Detroit-area physicians are arguing that FGM is a "religious practice" and that to interfere with it is tantamount to religious discrimination. There is some proof that Mohammed allowed a female "exciser" to perform this mutilation -- but he advised her not to "overdo it."

FGM is practiced most widely in the Islamic world in the Arab Muslim Middle East, both in the Gulf and African states (such as Egypt, Somalia, Sudan); it has, increasingly, spread to Muslim communities in Central Asia (parts of Iraqi Kurdistan and Iran), and to the Far East (Malaysia and Indonesia).

Female genital mutilation (FGM) is not at all like male circumcision. Not only is the capacity for sexual pleasure destroyed, complications are routine and include bleeding, painful urination, cysts, dangerous and recurrent bladder and urinary tract infections, the growth of scar tissue that make marital intercourse a nightmare and that turns childbirth into an experience of danger and torture.

It also increases the likelihood of newborn deaths. In addition, some girls and women develop fistulas and become incontinent. They are doomed to defecate and urinate without control. Absent effective surgery, this is a life-long condition which leads to a woman being shunned by her family.

And then there is a life-long post-traumatic stress disorder that normally accompanies the experience of having been forced into such suffering, usually by your mother or grandmother, and traditionally, at the hands of a female butcher.

In the West, misguided concepts of "multi-cultural relativism" and fear of offending an increasingly hostile Muslim and African immigrant population has condemned those girls and women who live among us and who deserve their rights under Western law.

Whether FGM is understood to be a religious or a tribal custom, like polygamy, child marriage, normalized daughter-and-wife battering, incest, and human sacrifice aka "honor killing," it has no place in the West.

Those who choose to live here should obey our laws; the freedoms for which we have fought should extend to all Americans, not only to some.


Dr. Phyllis Chesler is a fellow at the Middle East Forum and Emerita Professor of Psychology and Women's Studies. She is the author of 4 studies about honor killings and 16 books.