"As each pilgrim came off the bus they were asked to renounce their Christian faith and profess belief in Islam, but all of them—even the children—refused. Each was killed in cold blood with a gunshot to the head or the throat." 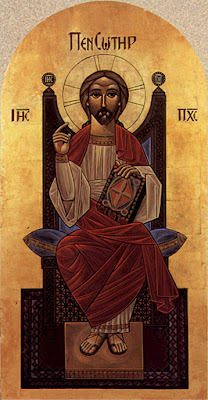 The classic Muslim way, just like with the 100,000 Holy Martyrs of Tbilisi, Georgia.

Update on this report.

The Copts continue to faithfully ascend their Golgotha, following the Lord Jesus Christ. Even though we are not in full ecclesial communion with the Coptic Orthodox Church, there have been fruitful talks in recent years, and we are certainly united with them through a communion of martyrdom, an ecumenism of blood.

Just like the Russian New Martyrs of the 20th century under the God-hating Soviet atheists, the Copts today are witnessing to Christ through confessing Him as Lord even unto death. And they and their families further fulfill the Lord's divine commands by forgiving and praying for their persecutors.

At every Divine Liturgy, at the Third Antiphon we chant the Beatitudes, from Matthew 5:3-11. We must wonder at what our Coptic brothers and sisters feel when they hear and sing these words:

Blessed are those who are persecuted for righteousness’ sake,
For theirs is the kingdom of heaven.
Blessed are you when they revile and persecute you, and say all kinds of evil against you falsely for My sake.
Rejoice and be exceedingly glad, for great is your reward in heaven...


The mass martyrdom of the Coptic Church in our time should force us all to our knees in tears and repentance for our lax and comfortable lives. May we be emboldened and encouraged in our faith by their ultimate sacrifice for love of our Lord Jesus Christ, and may the Lord strengthen us for our own time of trials, which is coming swiftly, and is already at the very doors.

In Ramadan Massacre, Egyptian Christians Killed for Refusing to Renounce Their Faith in Jesus

As more and more details emerge concerning Friday’s Ramadan attack on a busload of Christians on pilgrimage, the more it becomes evident that these 29 martyrs died solely because they were Christians.

Survivors of the attack said that the ten masked Islamic State militants did not merely open fire on the bus full of Christian pilgrims on their way to the Monastery of Saint Samuel the Confesor, but that the victims were made to descend from the bus and asked one by one whether they were Christians before being shot by the assailants.

According to one of the chaplains of the group, Father Rashed, as each pilgrim came off the bus they were asked to renounce their Christian faith and profess belief in Islam, but all of them—even the children—refused. Each was killed in cold blood with a gunshot to the head or the throat.


In a statement Friday, President Donald Trump said the “merciless slaughter of Christians in Egypt tears at our hearts and grieves our souls.”

“Wherever innocent blood is spilled, a wound is inflicted upon humanity,” the statement said. “But this attack also steels our resolve to bring nations together for the righteous purpose of crushing the evil organizations of terror, and exposing their depraved, twisted, and thuggish ideology.”

The attack occurred in the midst of a three-month state of emergency period in Egypt following twin attacks on Coptic churches on Palm Sunday last month that killed some 46 Christians who were in church honoring the celebrations. The Islamic State claimed responsibility for those attacks as well.

On Saturday, the Islamic State claimed responsibility for Friday’s slaughter through its Amaq news agency.

On learning more details of Friday’s attack, Pope Francis declared that the victims were “martyrs,” telling thousands of pilgrims gathered in St. Peter’s Square on Sunday that the murdered Christians, amongst whom were a number of children, “were killed after having refused to renounce their Christian faith.”

Reiterating his closeness to the whole Egyptian nation that two days ago suffered “another act of ferocious violence,” the Pope prayed that the Lord might “welcome these courageous witnesses, these martyrs, in his peace and convert the hearts of the terrorists.”

On Saturday, during a pastoral visit to Genoa, Francis prayed for the victims of the attack and lamented that there were more martyrs today than in early Christian times.

He also tweeted about the event, requesting prayers for “our Coptic brethren in Egypt” and highlighting the religious motivation behind the assault.

Let us pray for our Coptic brethren in Egypt who were killed because they did not want to renounce the faith.


While European leaders repeatedly stressed the importance of combating “global warming” during a recent meeting of the G7 in Taormina, Italy, President Donald Trump stressed the absolute priority of fighting the real and present danger of Islamic terrorism.

The President delivered a powerful speech against Islamist terrorism before 55 world leaders from Arab and other Muslim-majority nations in Riyadh earlier this week.

In that speech, Trump called for unity in pursuing “the one goal that transcends every other consideration. That goal is to meet history’s great test—to conquer extremism and vanquish the forces of terrorism.”

In this unique and preeminent task, Trump said, “Muslim-majority countries must take the lead in combating radicalization.”

“Every time a terrorist murders an innocent person, and falsely invokes the name of God, it should be an insult to every person of faith,” Mr. Trump said. “Terrorists do not worship God, they worship death.”