"A juvenile protection petition filed on behalf of the victims in Minnesota, along with federal court documents, cite scarring, a small tear, healing lacerations and what appears to be surgical removal of a portion of [the victim's] genitalia….


"Prosecutors say they believe there are many other victims. According to the seven-count indictment, the three defendants are part of a bigger conspiracy that ran from 2005 until this year...


This is the second in a 7-part series on Islam and FGM: 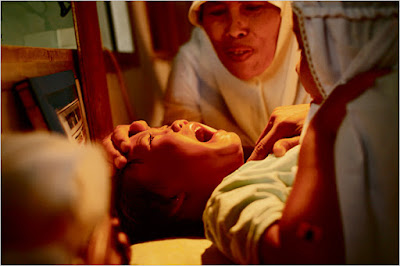 “The girls’ parents have not been charged.”

Why not? Obviously they wanted this done to their girls. Jumana Nagarwala didn’t steal into their homes in the dark of night and perform this barbaric procedure of her own accord.

Two weeks after a doctor’s arrest, a grand jury indicted three in a genital mutilation case, sending it to trial.

Dr. Jumana Nagarwala has maintained she never engaged in any genital cutting.

But according to documents obtained by the Free Press, the injuries sustained by two Minnesota girls who prosecutors say had their genitals mutilated by Nagarwala at a Livonia clinic are much more severe than what the doctor has claimed.

The details emerged as Nagarwala and two others were indicted Wednesday on genital mutilation charges in U.S. District Court, where the trio are accused of targeting young girls for years to carry out what prosecutors have described as a barbaric and illegal ritual. In this case, prosecutors say, when Nagarwala and her cohorts were discovered, they lied, deleted evidence and tried to hush others in their religious community to keep their crime a secret.


Nagarwala, through her lawyer, has admitted that she did perform a procedure on the genitalia of two Minnesota girls, but that it didn’t involve cutting. Rather, she claims, she scraped a membrane from their genitalia, wrapped it in gauze and gave it to the parents, who buried it as part of a religious custom.

A doctor’s findings, however, contradict that claim. A juvenile protection petition filed on behalf of the victims in Minnesota, along with federal court documents, cite scarring, a small tear, healing lacerations and what appears to be surgical removal of a portion of her genitalia….

Prosecutors say they believe there are many other victims. According to the seven-count indictment, the three defendants are part of a bigger conspiracy that ran from 2005 until this year, when a tip and a trail of electronic evidence led to their arrests.The main defendant is Nagarwala, 44, of Northville, who is charged with conspiracy, genital mutilation, transporting minors with intent to engage in criminal sexual activity, lying to a federal agent and obstructing an official proceeding. If convicted, she could face up to life in prison on the transporting minors charge. According to the indictment, Nagawala told federal agents that “she has never been present” for female genital mutilation — or FGM — on “any minor children” and that she has “no knowledge” of it ever being performed.

“Nagarwala then and there well knew she had performed FGM procedures on numerous minor girls,” the indictment states.

Prosecutors say Nagarwala pulled off this crime with the help of another doctor who let her use the Livonia clinic to carry out the procedure and helped coordinate the girls’ trip to Michigan. That physician is Dr. Fakhruddin Attar, 53, who was charged with the same crimes as Nagarwala. His wife, Farida Attar, 50, also was indicted for her alleged role: Prosecutors say she held the girls’ hands during the procedure and instructed at least one member of her community to lie if anyone asked questions.

According to the indictment, all three are accused of trying to keep this practice a secret within their Indian-Muslim community.

“(They) instructed others not to speak about FGM procedures that had taken place,” the 13-page document states….

The Attars deny any wrongdoing. Their lawyers have said both are deeply religious, have clean records and were frightened following their arrests….

The girls’ parents have not been charged.According to court documents, both girls have told FBI and state investigators that they had procedures performed on their genitalia, that it was painful and that they were both told to keep it a secret. One of the girls said the doctor made her cry and that she and her friend were both given cake after the procedure. One of the girls also said that she thought she was coming to Detroit for a “special” girls trip, but after arriving here learned that they had to go to the doctor because “our tummies hurt.”…