This federal case — believed to be the first of its kind in the USA — is becoming something of a legal test case which has the potential of rapidly advancing Islamic sharia law in the USA should female genital mutilation (FGM) be successfully defended in court as a Muslim religious practice, and thereby protected under the US Constitution.

Because of the importance of this case and what it reveals about the barbaric nature of Islam, this post is the first of a multi-part series covering the topic of Islamic female genital mutilation.

Most important of all is how this major news story and its revelations about this barbaric Islamic practice helps make abundantly clear that the desert pagan god of Islam is emphatically not the True God, the Father of our Lord Jesus Christ.

The key statement from a representative of the US Department of Justice:

“According to the complaint, despite her oath to care for her patients, Dr. Nagarwala is alleged to have performed horrifying acts of brutality on the most vulnerable victims,” Acting Assistant Attorney General Kenneth Blanco said in a statement. “The Department of Justice is committed to stopping female genital mutilation in this country, and will use the full power of the law to ensure that no girls suffer such physical and emotional abuse.”


This is the first of a 7-part series on Islam and FGM: 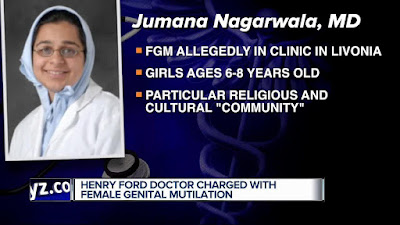 “The procedure is believed to initiate girls into adulthood and ensure their marriageability, according to Human Rights Watch, a New York nonprofit human rights organization.”

“Circumcision is obligatory (for every male and female) (by cutting off the piece of skin on the glans of the penis of the male, but circumcision of the female is by cutting out the bazr ‘clitoris’ [this is called khufaadh ‘female circumcision’]).” — ‘Umdat al-Salik e4.3, translated by Mark Durie, The Third Choice, p. 64

Why is it obligatory? Because Muhammad is held to have said so: “Abu al-Malih ibn Usama’s father relates that the Prophet said: ‘Circumcision is a law for men and a preservation of honour for women.’” — Ahmad Ibn Hanbal 5:75

“Narrated Umm Atiyyah al-Ansariyyah: A woman used to perform circumcision in Medina. The Prophet (peace be upon him) said to her: ‘Do not cut severely as that is better for a woman and more desirable for a husband.’” — Abu Dawud 41:5251

That’s why it is so common around the world, and why it is certain to become increasingly common in the United States.

Detroit — A Detroit emergency room physician was charged Wednesday with mutilating the genitalia of two 7-year-old girls in what is believed to be the first case of its kind brought under federal law.

Jumana Nagarwala of Livonia was charged with female genital mutilation, a five-year felony, and transportation with intent to engage in criminal sexual activity, a 10-year felony, according to a complaint unsealed Thursday in U.S. District Court.

“According to the complaint, despite her oath to care for her patients, Dr. Nagarwala is alleged to have performed horrifying acts of brutality on the most vulnerable victims,” Acting Assistant Attorney General Kenneth Blanco said in a statement. “The Department of Justice is committed to stopping female genital mutilation in this country, and will use the full power of the law to ensure that no girls suffer such physical and emotional abuse.”

Nagarwala was arrested Wednesday night and arraigned in federal court Thursday.
She was dressed in a light-colored, matching dress and khimar, or veil that covered her head, neck and shoulders.

Magistrate Judge Anthony Patti scheduled a detention hearing in the case for 1 p.m. Monday. Her attorney and the government will argue over whether or not Nagarwala should be held in prison while she awaits trial.

In the meantime, Nagarwala will be held in jail until Monday’s hearing.

Her attorney, Shannon Smith, who has offices in Bloomfield Hills, declined to comment on the case Thursday.

Nagarwala’s employer is not identified in court records. But a 44-year-old emergency room physician with the same name is listed on Henry Ford Health System’s website with hospital privileges in Detroit and West Bloomfield Township.

A Henry Ford spokesman confirmed that Nagarwala works for the hospital system and said she has been put on administrative leave.

“The alleged criminal activity did not occur at any Henry Ford facility,” health system spokesman David Olejarz said Thursday. “We would never support or condone anything related to this practice.”

The FBI investigation alleges Nagarwala removed clitoral skin from two girls who were brought to Detroit earlier this year, activity that violates both federal and state law regarding female genital mutilation.

Female genital mutilation is an internationally recognized violation of human rights and is popular among certain religious and cultural communities, according to the FBI. The procedure is believed to initiate girls into adulthood and ensure their marriageability, according to Human Rights Watch, a New York nonprofit human rights organization.

The practice is most common in parts of Africa, the Middle East and Asia, along with migrants from those regions, according to the World Health Organization.

Worldwide, an estimated 140 million women and girls have undergone the procedure, according to the World Health Organization. More than 3 million girls in Africa undergo the procedure each year….