This latest Muslim attack on non-Muslims might have ended as an even greater tragedy. Thank God it did not. But let us not become tragic figures ourselves by denying that this has anything to do with Islam.

The chorus of denial and exoneration of Islam has already begun. Robert Spencer explains:


“The 18-year-old freshman wrote a numeric list outlining his plans of who he wanted to kill, and how, including beheading and shooting his victims," Merced County Sheriff Vern Warnke told FoxNews.com…"No. 27 was to 'make sure people are tied down', No. 28 was 'sit down and praise Allah'.”

Then Warnke tells us this had nothing to do with Islam. The capacity for self-deceit and denial is endless, as authorities in the U.S. seem to have an indomitable will to make Islam look good, no matter what the facts of the case may be.

Asked if the manifesto made any references to Allah, Warnke said there were, but dismissed any suggestion that Mohammad was motivated by religion.

"His belief was through the Muslim faith, but there's nothing to indicate anything other than that," Warnke said. "It'd be like a Christian referring to the Lord Jesus."

Except Christians "referring to the Lord Jesus" do not routinely hack, stab, behead and shoot non-Christians all around the globe for any perceived slight, or to advance their religion. Of course, not all Muslims are terrorists, but most terrorists are Muslims.

Down Under Tim Blair reminds his readers of something I wrote a decade ago:

"These days, whenever something goofy turns up on the news, chances are it involves a fellow called Mohammed.

And then Tim adds:


Muhammad is not the only revered Islamic name associated with Muslim attacks, but it seems to be the top-most, and, in an ominous sign, happens also to be the most popular name for baby boys in London, England.

Having said all this, I must remind us all that the purpose in drawing attention to this is not to poke a stick at Muslims or offer further proof of Islam being a false religion, etc., but rather to hold out hope for Muslims of good conscience whose conscience accuses them each time another atrocity is committed in the name of Islam, Allah and Muhammad: "Why do you remain in Islam? Flee! Run to the Christians!"

This is the point. There is hope, freedom, deliverance, in the Gospel of Jesus Christ. We invite you to "Come and see..." 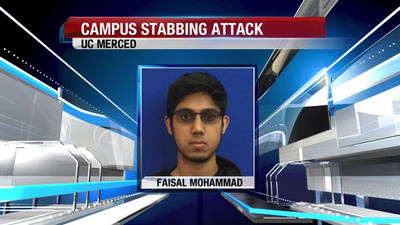 A handwritten manifesto carried by a California college student whose stabbing spree Wednesday left four wounded bore names of his targets, a vow “to cut someone’s head off” and as many as five reminders to “praise Allah,” law enforcement authorities told FoxNews.com, while insisting that neither terrorism nor religion appear to be motives in the attack.

In the two-page document found in Faisal Mohammad’s pocket by the county coroner, the 18-year-old freshman wrote a numeric list outlining his plans of who he wanted to kill, and how, including beheading and shooting his victims, Merced County Sheriff Vern Warnke told FoxNews.com[.]

“No. 27 was to ‘make sure people are tied down,’ No. 28 was “sit down and praise Allah,’” Warnke said. “I remember seeing four or five times, scribbled on the side of the two-page manifesto, where he wrote something like ‘praise Allah.’”


The manifesto has not been released, but Warnke expects it to be within the next few days.

Mohammad’s intended bloodbath began around 8 a.m.,when he burst into his classroom with an 8-inch hunting knife. Police said it would have continued – and possibly claimed lives – if he hadn’t been interrupted by a construction team, and then shot dead by police.

“There was a gruesome statement he made about wanting to cut someone’s head off and kill two people with one bullet, and he planned to shoot the police,” Warnke said. “He did not have a firearm with him and didn’t seem to have a lot of experience with firearms because he thought he could kill two people with one bullet. He reminded himself in the list to raise the gun slowly. He scripted everything out in chronological order.”

But all law enforcement involved in the investigation, including Warnke, continued to maintain that there is no evidence Mohammed is tied to a terrorist group or was inspired by terrorists.

“There was nothing to indicate he was doing this because of Allah, or because he was going to be rewarded with 72 virgins, or because of ties to a terror group,” Warnke said. “He appeared to be a devout Muslim, on the strong side of the belief.”

The FBI is thoroughly investigating this angle, Warnke said.

“There was nothing on his computer or in his dorm room or in the manifesto to suggest any ties to terrorism or terrorists groups,” Warnke said.

As a wannabe killer, Mohammed was cold and calculating.

“He had a smile on his face, he was having fun, which is more the thing that bothers me,” said Byron Price, who was managing the construction site at the university for his family’s construction company.

Mohammed fled the classroom after he was overwhelmed by Price and another construction worker who was about to hit Mohammed with a ladder.

“He was banking on the fear factor. …His plan went haywire because people fought back,” Warnke said. “He got so befuddled at the activities that happened; it took the script away from him.”…