It is said of St Ignatius of Antioch that after he had been martyred — torn to pieces by the lions in the Roman Coliseum — that they found his heart, which had the name "Jesus" imprinted upon it.

That is the example for Orthodox Christians to follow, not multicultural apostates who openly deny Jesus Christ.

This poor, deceived woman condemns the very people she claims to want to help. Mecca points to death and damnation. There is no other name than Jesus by which we may be saved (Acts 4:12).

There is some outcry over this in Sweden, but the apostasy gallops along, and the apocalypse draws nearer... 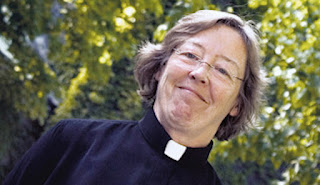 Bishop Eva Brunne has proposed to remove the Christian symbols of the Seamen’s Church in Freeport to make it more inviting for visiting sailors from other religions.

The bishop wants to temporarily make the Seamen’s Church available to all, for example by marking the direction of Mecca and removing Christian symbols, as is already done in common prayer rooms at airports and in some hospital chapel.

The proposal has triggered protests. Patrik Pettersson, priest of the Oscars parish in Stockholm, thinks that the proposal is noteworthy and writes on his blog:

“The church chapel can not reasonably be equated with prayer rooms at airports and hospital chapels anyway. The Christian churches and chapels are not public areas at any time.”

And Seamen’s Mission Director Kiki Wetterberg does not agree with the bishop.

“I have no problem with Muslim or Hindu sailors coming here and praying. But I believe that we are a Christian church, so we keep the symbols. If I visit a mosque, I do not ask them to take down their symbols. It’s my choice to go in there,” she says to the newspaper Dagen.