Maronite Patriarch of Antioch: Muslims want to conquer Europe with 'faith and the birthrate'

The cardinal said that "Muslims look on Christians as weak and believe that since they have no children and barely practice their faith, Islam will easily conquer them. Sadly, Muslims take their faith more seriously than most Christians, and they are gaining ground because of it."

From the heart of the Islamic world comes a Christian hierarch willing to speak the truth. We are only at the beginning of this new age of mass martyrdom of Christians. 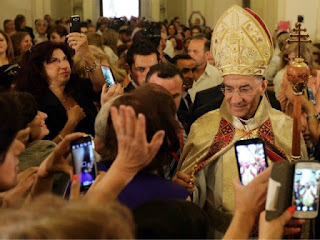 In a stunning interview, the Maronite patriarch of Antioch, Cardinal Bechara Boutros al-Rahi, has contended that Islam has a clear, two-pronged strategy to take over Europe: religion and procreation.

The cardinal said that Muslims look on Christians as weak and believe that since they have no children and barely practice their faith, Islam will easily conquer them. Sadly, he said, Muslims take their faith more seriously than most Christians, and they are gaining ground because of it.

“I have often heard from Muslims that their goal is to conquer Europe with two weapons: their faith and their birthrate,” al-Rahi said in a recent interview with Famiglia Cristiana, an Italian Catholic weekly magazine.

For the Muslims, the Cardinal said, “the practice of the faith is essential and fundamental. In Saudi Arabia they go to Friday prayers even if they need a walking stick. They know the Koran by heart, and when they talk they often cite it. The same is not true for Christians who do not refer either to the Bible or the teachings of the Church.”

The Muslims “believe that God’s will is to procreate and that marriage is aimed at this,” he said. “They think that numbers will give them the upper hand.”

Christians, however, “hardly get married anymore, and have few children,” he said.

The Cardinal also said that Muslims “identify anything that comes from the West as Christian per se. All Western politics is Christian politics, it is a new crusade. They say that Christians are the remains of the Crusades and of Western imperialism,” he said.

At the same time, al-Rahi sharply criticized the EU’s ineffective solutions to Europe’s migration crisis, arguing that the only way to end the chaos is by stopping the Islamic State in Iraq and Syria.

The 75-year-old cardinal is the Maronite Patriarch of the ancient city of Antioch, where Christianity has deep and millennial roots. He said that the ongoing conflict provoked by the Islamic State is forcing both Christians and moderate Muslims to emigrate from the Holy Land, so before all else, attention must be given to putting an end to the siege.

It is useless for Europe to quarrel over the reception of refugees without addressing the root cause of emigration from the Middle East, which is armed conflict, he said.

“The first thing to do to protect Christians in the Middle East is to end the war in Syria, Iraq, Yemen and Palestine,” the Cardinal said. “European states quarrel with each other about the number of refugees to be admitted but do nothing to end the conflict.”

“The Middle East is emptying and leaving the field open to fundamentalist and terrorist organizations,” al-Rahi said. For some reason, he said, “States do not talk about it, the only one making appeals is Pope Francis.”

“Europe is talking about the reception of refugees, those who would like ten thousand and another who will take three thousand people, but this does not help us,” he said. “Europe should focus on the cause of migration, namely the war. You have to turn off the tap and ensure that Muslims and Christians will return to their lands.”

“A Middle East without Christians,” the Cardinal continued, “has no identity.”

“This is the place of all divine revelation. It is where Jesus took flesh, died and rose again. It is where the Church was born and began to proclaim the Gospel to the world,” he said.

Al-Rahi also noted that Christians resent being called a “minority” in the Middle East. We have been here for two thousand years, he said, “six hundred years before the arrival of Islam.”

“Just as Europe discusses how to preserve its identity, it is urgent that we do the same,” he said.