This crime is identical to this story from back in April 2015. How many such Muslim attacks on migrant Christians go unreported?

I wrote at that time:

The Muslim attack on Christians in a migrant boat crossing the Mediterranean is a sign of our times, a dark symbol and metaphor for a future which is rapidly beginning to come into focus:

We are all in a boat together, but there is a band of people in our boat which seeks to throw the rest of us overboard, to kill us, to sink and drown us, to eliminate us.

The fate of the murdered Christian migrants is the image of our future, unless we too form a human chain to resist our attackers. 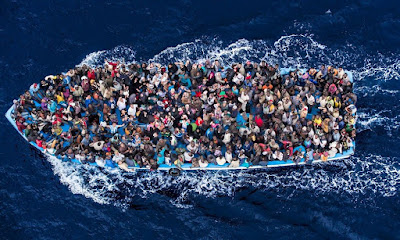 Rome (CNN) -- Muslims who were among migrants trying to get from Libya to Italy in a boat this week threw 12 fellow passengers overboard -- killing them -- because the 12 were Christians, Italian police said Thursday.

Italian authorities have arrested 15 people on suspicion of murdering the Christians at sea, police in Palermo, Sicily, said.

The original group of 105 people left Libya on Tuesday in a rubber boat. Sometime during the trip north across the Mediterranean Sea, the alleged assailants -- Muslims from the Ivory Coast, Mali and Senegal -- threw the 12 overboard, police said.

Other people on the voyage told police that they themselves were spared "because they strongly opposed the drowning attempt and formed a human chain," Palermo police said.

The boat was intercepted by an Italian navy vessel, which transferred the passengers to a Panamanian-flagged ship. That ship docked in Palermo on Wednesday, after which the arrests were made, police said.

The 12 who died were from Nigeria and Ghana, police said.

Thousands of people each year make the dangerous sea journey from North Africa to Europe's Mediterranean coast, often aboard vessels poorly equipped for the trip. Many of them attempt the voyage to flee war and poverty in Africa and the Middle East.

More than 10,000 people have arrived on Italian shores from Libya since last weekend alone, according to the Italian coast guard.

Many die each year while attempting the voyage, often when boats capsized. Last year at least 3,200 died trying to make the trip. Since 2000, according to the International Organization for Migration, almost 22,000 people have died fleeing across the Mediterranean.

The IOM reported Thursday the latest boat to sink in trying to make the journey. Only four people survived from the original 45 on board, bringing the estimated death toll so far this year close to a thousand.
Posted by Zosimas at 8:32 AM