The podcast of Ancient Faith Today with Kevin Allen, featuring Faith McDonnell and myself discussing Global Persecution of Christians is now posted as a podcast, and is available for download to your iPod, iPhone, iPad or other tablet or smartphone, or your Mac or PC, or to listen to in browser.

We all felt it went very well, with several callers from the U.S. and Europe providing excellent questions, providing a robust and unflinching discussion of key aspects of Muslim persecution of Christians. I hope this serves as a valuable resource going forward.

Perhaps this will prove to be one of those 'watershed moments' which helps further open up this difficult subject, and motivates us Orthodox Christians to offer our prayers and active support for our persecuted brothers and sisters worldwide. 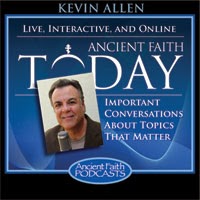 Host Kevin Allen talks with Faith McDonnell and Ralph H. Sidway about the rising tide of Christian intolerance and genocide—the intentional killing of people for their Christian faith—and why global Christophobia is rarely covered by Western media or addressed by the United Nations.

Faith McDonnell is the Director of Religious Liberty Programs at the Institute for Religion and Democracy and the author of the book Girl Soldier: A Story of Hope for Northern Uganda's Children. Her blog is titled "Juicy Ecumenism." Ralph H. Sidway is the author of Facing Islam: What the Ancient Church has to say about the Religion of Muhammad and the blog of the same name.

As an added feature, below is the graph reflecting the sharp increase in persecution of Christians worldwide from 2003 to 2010, which Faith McDonnell referred to in the interview. The explosion of attacks on Christians since the 'Arab Spring' in 2011 would drive this graph considerably higher. 2013 was the worst year for persecution of the Coptic Christians in Egypt in centuries. This chart can be found in the important Newsweek issue from February 2012.

Regarding Islamic terrorism in general, there have been almost 22,000 deadly attacks committed by Muslims since 9/11/01. 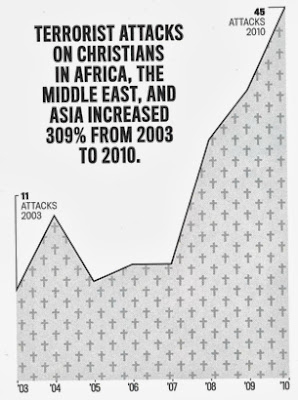