After discussing the Borg of the Star Trek universe in Part 1, and the shuffling zombies of The Walking Dead in Part 2, I wish to apply the SciFi angle to Islam in a slightly different way by considering the symbolism behind the new Brad Pitt blockbuster, World War Z, scheduled for release on June 21, 2013.

In my Walking Dead article, I surveyed the zombie apocalypse genre pretty thoroughly, so I won't discuss that again here. I did mention the jacked-up zombies of 28 Days Later, which are not the typical slow-moving undead, but are instead infected by what is called the "Rage Virus," which accelerates their mobility, and their killing capabilities.

It seems something similar to the rage virus is what is infecting Brad Pitt's adversaries in World War Z, only in WWZ the outbreak is not limited to an island, but rapidly spreads around the globe through its highly infectious nature, and the 8 second transition period from bite to biter.

The trailers are filled with harrowing scenes, with rapid, rabid mobs overrunning cities, defenses, buildings, helicopters, climbing up over one another to scale fortified walls. (There is even a deeply disturbing scene on a jetliner which jolts to mind memories of the 9/11 jihad hijackings.) It is truly shocking imagery, yet in a strange sense, it seems we have seen something like this before...


Why yes, we have... in the massive Arab Spring riots in Cairo's Tahrir Square, Tunisia and Libya, and in the riots in Fall 2012 over a YouTube video said to insult Muhammad and Islam, and of course the infamous riots which raged throughout the Muslim world in 2006 following publication of cartoons of Muhammad by a Danish newspaper, and so on.

Taking the Arab Spring as one example, the shocking inhumanity of that supposed "freedom and democracy" movement, which has ended up sweeping hard-core Islamists into power, was exposed for all the world to see. Murder, rape, molotov cocktails, madness, screaming, mayhem; the only obvious difference seems to be that zombies don't wave flags or Qur'ans, or promise "freedom and democracy," or claim to follow a prophet of peace and tolerance.

You've seen the WWZ trailer above. Here is very nearly a mirror image from RussiaToday news, reporting on the YouTube riots. With a little editing, it could pass for another WWZ movie trailer, even including a spinning globe graphic showing the spread of the Muslim Rage Virus:

One thing is similar between the slow, shuffling zombies and the jacked up Z-zombies: neither type has a human conscience. Regarding the Human Conscience, I said this in my post on the Walking Dead:


The point in considering all this is to draw the comparison with the Islamic worldview, the worldview of Jihad, where Muhammad is the al insan al kamil, the perfect man and most beautiful pattern of conduct. From this primary principle are traced all the horrendous excesses of the shari'ah, which derive straight from the Qur'an and the Sunnah of Muhammad: Infidels (kuffir) are the most vile of created beings, Jews are equated with pigs and monkeys, non-Muslims must convert to Islam, submit to Islam's authority, or be killed, amputations for thieves, stoning for adulterers, and more and more blood and carnage.

What happens when a Muslim buys into the Islamic worldview and accepts Muhammad as his example, submitting himself to the shari'ah, is that the Muslim submits his (or her) conscience to the uber-conscience of the Ummah. Such a Muslim ultimately commits moral suicide, deadening his conscience to the point that murder is justifiable; condemning non-Muslims, deceiving them, and if possible waging war against them is not only permissible but obligatory. Because Muslims who have submitted to the Jihadi worldview believe that Allah has ordained everything and Islam is superior, they have lost virtually every last trace of a normal human conscience. They are instead propelled by dark red impulses at the base of the brain. The Jihadi is like a slightly more intelligent, more functional zombie.

We might dare to specify it a bit more clearly: the Jihadi is a moral zombie.

The Global Jihad Pandemic is not the first outbreak of evil which springs into being when men and women kill their God-given conscience. We've seen similar plagues before: the French Revolution, the Armenian Genocide (which really spanned from 1894 to 1923 and beyond, see here and here), the Bolshevik Revolution and the subsequent seven decade reign of militant atheist terror in Russia, Nazism and the Holocaust, the killing fields in Cambodia, and so on. However, the Global Jihad is unique in that it is inspired by religion, not fleeting political movements, and in that it draws from a pool of adherents numbering around 1.5 billion. World War Z indeed.

Amazing how the terrifying images out of the Islamic world mirror these nightmarish zombie fictions. And we really should not be too surprised at the similarity, as the Qur’an commands this:


Am I implying that all Muslims are jihadist terrorist zombies? Of course not. But most terrorists and all jihadists are Muslims, and according to one reputable statistic, there have been almost 21,000 deadly jihad terror attacks since 9/11/01. The recent Boston Marathon bombings have like never before raised the issue of how Muslims become “radicalized” — or as some prefer to call it, “self” radicalized — as if the Muslim turn to violent jihad could occur in isolation from any influences. Indeed, as we have been learning, the Tsurnaev brothers were associated with a radical mosque in Boston, and four separate studies over the last decade have shown that upwards of 80% of mosques in the U.S. promote jihad, violence, Islamic supremacism and sedition (see here, here, here and here).

The Islamic Jihad plague is not a random phenomenon which is impossible to understand. Rather it is a religious commandment and worldwide movement, one which indicates a spiritual death and turn — analogous to how a zombie turns — a deadening of the conscience, enabling the replacing of it with dark and blood-red motivations.

Brad Pitt may not realize it, but his epic zombie apocalypse film, World War Z, provides us with the most vivid metaphor yet of the real world war we are already facing.

Brad Pitt's character in the film is a UN investigator desperately searching for clues to creating a cure to the zombie plague. In confronting the real-world Islamic Jihad Zombie Plague, the only possible cure is Christ. Don't laugh, jihadis can be converted! We have such an example in the fearless martyr Fr Daniel Sysoev of Moscow, who spoke and wrote boldly against Islam, and before he was killed by a Muslim extremist had converted some eighty Muslims to Christ, including some hardcore Wahabbi extremists.

How could he do this? Only by the love of Christ, and by the power of the Holy Spirit. The teaching of the beloved Russian Saint Seraphim of Sarov comes to mind: "Acquire the Spirit of Peace, and a thousand will be saved around you."

Regardless of how far gone a jihadi may seem, he or she is still a human person created in the image of God. Unlike a zombie, a Muslim can repent, renounce his false religion and embrace Jesus Christ, and be raised to newness of life. This hope of the awakening and conversion of every soul is at the core of our faith. And as a line from the WWZ trailer says, "Each one we save is one less we have to fight."

I deliberately have included this Christian exhortation, both to encourage the Christians who may be reading this, but also to encourage all of us, whatever creed, whether believers or atheists, to not allow our own innate human conscience to die or burn out during our struggle against the “jihad zombies.” If we allow hate to rise like bile within our hearts, we ourselves are in danger of becoming less than human, and the zombies which plague us will have won a double victory. We must admit to having mortal enemies, but we do not have to admit their infection into our hearts. "Let us forgive all by the Resurrection."

In closing, just for emphasis, here are some more images to make the zombie-jihad connection. See if you can tell the difference: 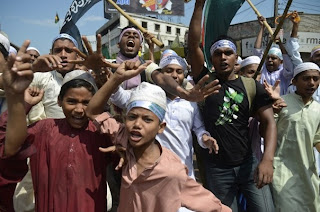 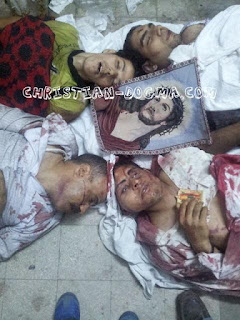 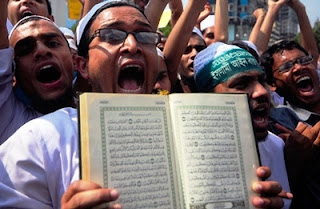 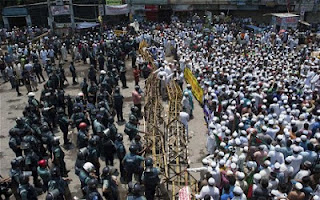 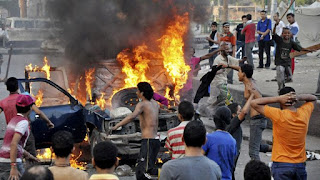 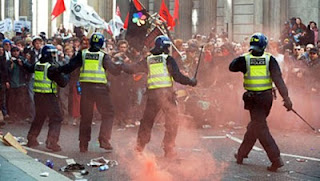 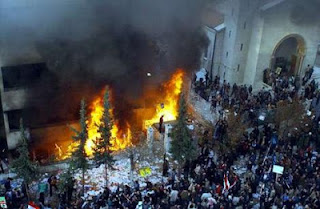 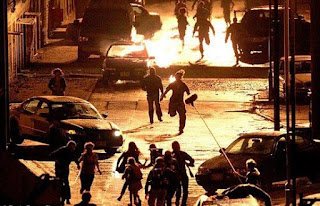 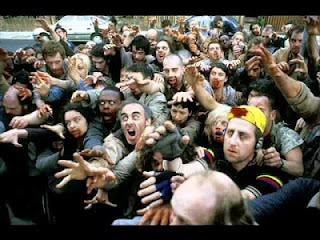 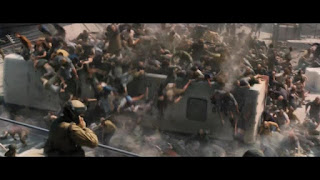 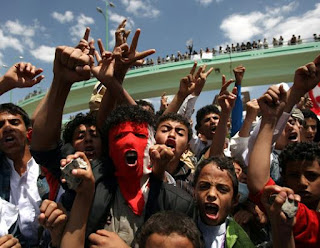