Matushka Constantina, over at Lessons from a Monastery, has posted a very mysterious and meaningful story about the Fall of Constantinople. Please read all the way to the end... 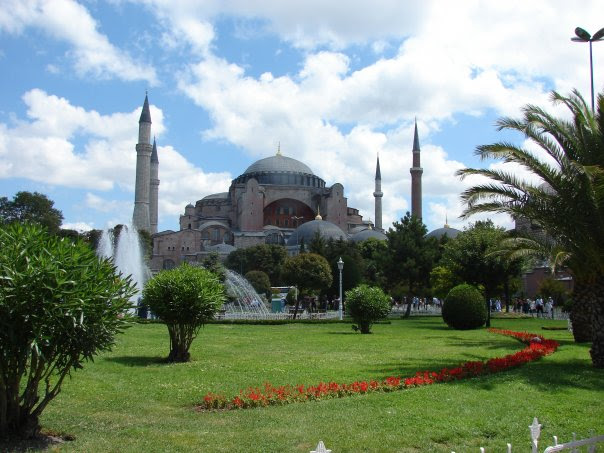 This photo is of Hagia Sophia in Constantinople from our pilgrimage there in 2008. I am posting it today as a reminder of the day the City fell. In my book The Scent of Holiness (pp. 128-129) there is a story about the first Patriarch after the fall, St. Gennadios Scholarios II.  Here it is:

After singing Agia Sophia I told them about my trip with my husband to Constantinople earlier that summer, and they told me about Patriarch Gennadios Scholarios. He was the first Patriarch  after the city fell.

After the Turks took over Constantinople, the ruling Sultan Mehmed II, who led the capture of the city, had a recurring dream about a hand with five fingers. Upset that neither he nor any other Muslim could decipher its meaning, the Sultan sent out his men to find the monk Gennadios, who was renowned for his insight into things of a spiritual nature. Once they found him, the men asked monk Gennadios to interpret the Sultan’s dream. Gennadios agreed but said he needed to fast and pray for several days before he would be able to interpret it.

“If there had been only five faithful Christians in Constantinople, God would not have allowed it to be captured by you,” monk Gennadios explained to the Sultan.

Relieved to finally have his dream interpreted, Sultan Mehmed II promised not to persecute the Christians and to make Gennadios the leader of his people. The Sultan honored his wish. Thus, monk Gennadios became the first Ecumenical Patriarch after the fall of The City…

Imagine, I thought to myself, if back then there weren’t even five faithful Christians in Constantinople, how many would God find in our cities today?