I hope to soon post my own article from an Orthodox perspective on the Benghazi Attack Cover-Up, but for now, Mark Steyn's commentary in the National Review Online is a worthy read (the cartoon and images I've inserted help punch it up a bit too): 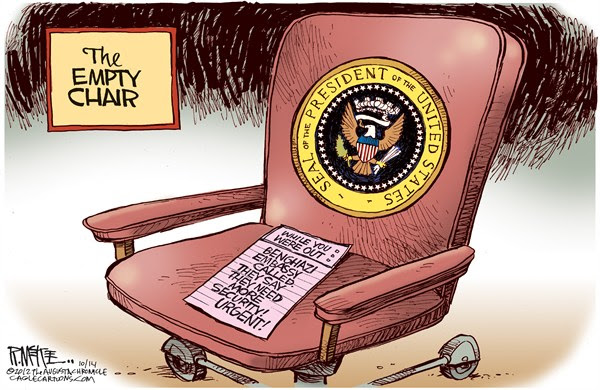 The Benghazi Lie
A failure of character of this magnitude corrodes the integrity of the state.

Shortly before last November’s election I took part in a Fox News documentary on Benghazi, whose other participants included the former governor of New Hampshire John Sununu. Making chit-chat while the camera crew were setting up, Governor Sununu said to me that in his view Benghazi mattered because it was “a question of character.” That’s correct. On a question of foreign policy or counterterrorism strategy, men of good faith can make the wrong decisions. But a failure of character corrodes the integrity of the state.

That’s why career diplomat Gregory Hicks’s testimony was so damning — not so much for the new facts as for what those facts revealed about the leaders of this republic. In this space in January, I noted that Hillary Clinton had denied ever seeing Ambassador Stevens’s warnings about deteriorating security in Libya on the grounds that “1.43 million cables come to my office” — and she can’t be expected to see all of them, or any. Once Ambassador Stevens was in his flag-draped coffin listening to her eulogy for him at Andrews Air Force Base, he was her bestest friend in the world — it was all “Chris this” and “Chris that,” as if they’d known each other since third grade. But up till that point he was just one of 1.43 million close personal friends of Hillary trying in vain to get her ear.

Now we know that at 8 p.m. Eastern time on the last night of Stevens’s life, his deputy in Libya spoke to Secretary Clinton and informed her of the attack in Benghazi and the fact that the ambassador was now missing. An hour later, Gregory Hicks received a call from the then–Libyan prime minister, Abdurrahim el-Keib, informing him that Stevens was dead. Hicks immediately called Washington. It was 9 p.m. Eastern time, or 3 a.m. in Libya. Remember the Clinton presidential team’s most famous campaign ad? About how Hillary would be ready to take that 3 a.m. call? Four years later, the phone rings, and Secretary Clinton’s not there. She doesn’t call Hicks back that evening. Or the following day.

Are murdered ambassadors like those 1.43 million cables she doesn’t read? Just too many of them to keep track of? No. Only six had been killed in the history of the republic — seven, if you include Arnold Raphel, who perished in General Zia’s somewhat mysterious plane crash in Pakistan in 1988. Before that you have to go back to Adolph Dubs, who died during a kidnapping attempt in Kabul in 1979. So we have here a once-in-a-third-of-a-century event. And at 3 a.m. Libyan time on September 12 it’s still unfolding, with its outcome unclear. Hicks is now America’s head man in the country, and the cabinet secretary to whom he reports says, “Leave a message after the tone and I’ll get back to you before the end of the week.” Just to underline the difference here: Libya’s head of government calls Hicks, but nobody who matters in his own government can be bothered to.

What was Secretary Clinton doing that was more important? What was the president doing? Aside, that is, from resting up for his big Vegas campaign event. A real government would be scrambling furiously to see what it could do to rescue its people. It’s easy, afterwards, to say that nothing would have made any difference. But, at the time Deputy Chief Hicks was calling 9-1-1 and getting executive-branch voicemail, nobody in Washington knew how long it would last. A terrorist attack isn’t like a soccer game, over in 90 minutes. If it is a sport, it’s more like a tennis match: Whether it’s all over in three sets or goes to five depends on how hard the other guy pushes back. The government of the United States took the extremely strange decision to lose in straight sets. Not only did they not deploy out-of-area assets, they ordered even those in Libya to stand down. Lieutenant Colonel Gibson had a small team in Tripoli that twice readied to go to Benghazi to assist and twice was denied authority to do so, the latter when they were already at the airport. There weren’t many of them, not compared to the estimated 150 men assailing the compound. But they were special forces, not bozo jihadists. Back in Benghazi, Tyrone Woods and Glen Doherty held off numerically superior forces for hours before dying on a rooftop waiting for back-up from a government that had switched the answering machine on and gone to Vegas.

Throughout the all-night firefight in Benghazi, Washington’s priority seems to have been to do everything possible to deny that what was actually happening was happening at all. To send “soldiers” on a “mission” to “fight” the “enemy” was at odds with the entire Obama narrative of the Arab Spring and the broader post-Bush Muslim world. And so the entire U.S. military was stood down in support of the commander-in-chief’s fiction.

As Mr. Hicks testified, his superiors in Washington knew early that night that a well-executed terrorist attack with the possible participation of al-Qaeda elements was under way. Instead of responding, the most powerful figures in the government decided that an unseen YouTube video better served their political needs. And, in the most revealing glimpse of the administration’s depravity, the president and secretary of state peddled the lie even in their mawkish eulogies to their buddy “Chris” and three other dead Americans. They lied to the victims’ coffins and then strolled over to lie to the bereaved, Hillary telling the Woods family that “we’re going to have that person arrested and prosecuted that did the video.” And she did. The government dispatched more firepower to arrest Nakoula Basseley Nakoula in Los Angeles than it did to protect its mission in Benghazi. It was such a great act of misdirection Hillary should have worn spangled tights and sawn Stevens’s casket in half.

The dying Los Angeles Times reported this story on its homepage (as a sidebar to “Thirteen Great Tacos in Southern California”) under the following headline: “Partisan Politics Dominates House Benghazi Hearing.” In fact, everyone in this story is a Democrat or a career civil servant. Chris Stevens was the poster boy for Obama’s view of the Arab Spring; he agreed with the president on everything that mattered. The only difference is that he wasn’t in Vegas but out there on the front line, where Obama’s delusions meet reality. Stevens believed in those illusions enough to die for them. One cannot say the same about the hollow men and women in Washington who sent him out there unprotected, declined to lift a finger when he came under attack, and in the final indignity subordinated his sacrifice to their political needs by lying over his corpse. Where’s the “partisan politics”? Obama, Clinton, Panetta, Clapper, Rice, and the rest did this to one of their own. And fawning court eunuchs, like the ranking Democrat at the hearings, Elijah Cummings, must surely know that, if they needed, they’d do it to them, too. If you believe in politics über alles, it’s impressive, in the same way that Hillary’s cocksure dismissal — “What difference, at this point, does it make?” — is impressive.

But the embassy security chief, Eric Nordstrom, had the best answer to that: It matters because “the truth matters” — not least to the Libyan president, who ever since has held the U.S. government in utter contempt. Truth matters, and character matters. For the American people to accept the Obama-Clinton lie is to be complicit in it.

— Mark Steyn, a National Review columnist, is the author of After America: Get Ready for Armageddon. © 2013 Mark Steyn