Interview with a Syrian Orthodox Priest

This just in from Deacon Giorgi Maximov, one of Russia's most insightful writers on the threat of Islam, and on Orthodox missionary work to Muslims. Fr. Dcn Giorgi was also a close friend and co-laborer of New Priest-Martyr Daniil Sysoev.

What this priest describes below is deliberate religious cleansing of Christians from Syria by Muslims, and we might even dare to call it genocide.


ON SYRIA, JIHAD, AND KIDNAPPED METROPOLITAN PAUL. AN INTERVIEW WITH AN ORTHODOX PRIEST FROM SYRIA

OrthoChristian.com offers this brief conversation with an Orthodox Syrian, Hieromonk N. from the Antiochian Patriarchate, dedicated to the very difficult situation of Christians in Syria today. The editors have chosen not to provide the priest’s name in order to protect him and his close ones from danger. 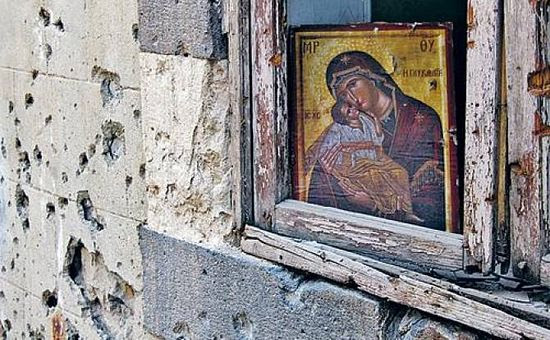 Within the framework of their declared “holy” war, they torture and kill Orthodox priests; they gouge out their eyes, break their bones, and cut out their organs, as they did with Fr. Thaddei Al-Haddad. They abduct priests, bishops, Christian women, and young men, and no one knows where these people are and what is happening to them. Some were abducted over a year ago, and we still do not know their fate. Some have had their homes taken away from them, while others’ home were destroyed during the fighting. In the past months, every day brings us new tragedies. For example, yesterday a whole bus full of women and children was abducted. The leaders of these fighters openly call Moslems to kill priest and monks, to destroy crosses, and to leave nothing intact. They have destroyed many churches and monasteries—a missile was even fired at our Metropolia building. The persecutions touch not only Orthodox Christians, but also Christians of other confessions. Many Christians live in fear for their children. Those who are able leave the country, but these are mainly people who have relatives in other countries, and who have enough money to leave.

There are whole populated areas that have been completely taken over by insurgents. They are ruled by newly-appeared emirs, and those Christians who were not able to flee these places are obligated to pay jizya—a special tax that allows them to remain Christians, and Christian women must hide their faces like Moslem women. If they don’t pay the jizya they are simply killed. It would not be good if all Christians were to leave Syria, because then the Church would disappear here. But those who stay risk their lives and the lives of their children. Therefore the Church finds itself in a very complicated position. Prayer is our only support. After all, everything is in God’s hands.