Timothy Furnish: 'Luther Writes Once Again on the War Against Islam'

"In the end, I fear that he who consorts with Islam will be a partaker of that terrible abomination and bring down on his own head all the blood it has ever shed, and all the lies with which Islam has damaged Christ’s Kingdom."

Luther Writes Once Again on the War Against Islam 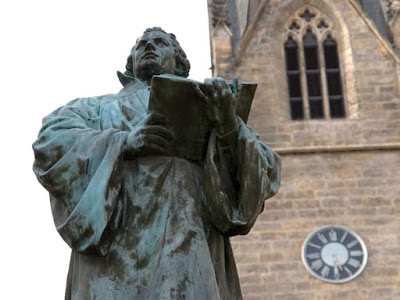 Adapted freely from Martin Luther’s “On War against the Turk,” (1528).


Certain persons have been wondering for years what I might say about conflict with Islam in the modern world. Especially since there are some stupid twenty-first century clergy who are making the people believe we ought not, and must not, oppose Islam at all. Some are even so crazy as to say it is not proper for Christians to be rulers. Especially if they are “Islamophobic,” as they accuse you. Your accusers know better, but they pretend not to. Thus, it is necessary to write of these things for the sake of America and Christendom.

From here, then, I commend Your Grace to our merciful God’s guidance and favor, and may He strengthen Your Grace for a blessed administration — or two.


The Church Cannot Lead the War


When I was alive the papacy condemned me for many things. One of them was for saying that fighting against the invading Ottoman Turks was the same thing as resisting God, who visits our sins upon us with this rod. (Just as He sent the Assyrians and Babylonians against the Israelites in the Old Testament.) In this I was said to be arguing that Christians cannot bear the sword.

But I was doing no such thing. My point was that the leadership of the Church ought not strive or fight with the sword. In fact, it still holds that if I were a soldier and saw in the field a banner of the cross, even though it were a crucifix, I should run as though the devil were chasing me. However, if the banner of the Emperor (President, or Republic, in your day) is in the field, then let everyone run boldly and gladly to it. Keep in mind: your struggle against Islam should not be a “Crusade.” But it should be fought, and on two fronts.


On one, all Christians should pray for your secular leaders. But here you may ask “who are these Christians, and where does one find them?” Answers: they are all who hold to the Gospel, that Jesus Christ was crucified and resurrected to pay for our sins; and they are everywhere, in red and blue states (although perhaps spread thin in certain denominations). Every pastor and priest ought to exhort his people most diligently to repentance and prayer for leadership and for their nation. I know that for the media and many so-called scholars, this advice of mine will be laughable. They will hold it for a simple and common thing which they have long since got beyond. Nevertheless, I commend it to your countrymen.


All of them should have been moved to prayer against Islam by the great need of your time. It is true that 500 years after I posted those theses, Christians are spread around the globe. This is quite unlike my time, when Christendom was mostly limited to Europe, the Eastern Orthodox in Russia, and those under the Ottoman yoke. But even so, believers in the Gospel are persecuted more than any other. Some of your scholars say that the faith of Muhammad is growing faster than Christianity, and will become the world’s largest religion by 600 years after I first called for a debate in the Church. (Unless the Chinese—the Chinese?!—save the Church.)

And instead of the Turk conquering from outside, as we all feared in 1528, he is doing so from inside. By being invited in! Europe has 44 million Muslims! The Sultan could only dream of such influence. Germany is home to 5 million. The French have yet more. Even in your America there are now over 3 million Muslims. That is far more than there were before you were attacked on September 11, 2001. And it is already becoming the case that in many parts of Christendom no one can openly confess Christ or preach or teach against Muhammad. This is the same as in the lands of the Turks. What kind of freedom of belief is that?


Guerrillas and Terrorists Wage the Jihad


The other front of warfare against Islam is to fight those in your time called “terrorists.” There is (at least for now) no mighty empire such as the Turks had in my time. So the followers of that false prophet attack piecemeal, and in small groups, instead of in the Sultan’s huge armies. But they still must be fought. It is the place of the Emperor, or President in your day, to lead this second front. It is his duty, as a ruler approved by God, first and foremost to defend his own.

I see clearly that rulers still in your time are taking a silly and reckless attitude toward Islam. They do not know that no kingdom or land is strong enough to resist it alone, or without Christian prayer. But we must first smite Allah with prayer, as I have said before. Otherwise, I fear, the sword will accomplish little.

Then, the second front should proceed in the following manner. It must be fought under the secular government’s banner. The leader of the government fighting should seek nothing else than simply to perform the duty of his office. There is to be no fighting for honor, glory, wealth, the increasing of lands, or making them like you. Let the Muslim believe and live as he will.


Let the Muslim Believe as He Will


Finally, I must stress again that the ruler should fight to protect people, but not as head of Christendom or protector of the Gospel. The Church and the faith have another protector than Presidents or Prime Ministers. The ruler’s sword has nothing to do with the faith; it belongs to physical, worldly things. This is how your country fought against the Islamic State caliphate, and won.

But to say that “let the Muslim believe and live as he will” in his own lands does not mean Christians should be ignorant of Islam. Or that Muslims should have free rein to spread the teachings of their false prophet, unopposed, in your lands. It used to disgust me, and still does, that neither our great lords nor our scholars have been at any pains to give us certain knowledge about Islam. In fact, even in your time anyone who tries to do so — like Tommy Robinson — has his writings banned. (Something I know about.)


Too few in your Republic, My Lord President Trump, know that the Koran denies Jesus is God’s Son, glorifies the sword, and permits a man to take multiple wives as he will. Yet in your own land, as in Europe and especially Germany, there are those who desire the coming of Muslims — and as many as possible.

In part this is due to ignorance. But there are also many who desire this because of their hatred for you. All the more reason to pray for secular rulers such as yourself, My Gracious Lord. In the end, I fear that he who consorts with Islam will be a partaker of that terrible abomination and bring down on his own head all the blood it has ever shed, and all the lies with which Islam has damaged Christ’s Kingdom.


Jihadists Are Tougher than Nazis


I do not advise rulers go to war with certain Muslims because of their false belief, but because of the murder and destruction they bring. But the rulers and people must remember that fighting against Islam is not like fighting Nazi Germany, or Communist Russia. Islam fields a different kind of warrior—a religious one with staying power. That is why you must use Christian prayer and knowledge against him, as well as armies, while always keeping the two kingdoms separate. Even in 2019 AD, it remains true that if you will not learn out of the Scriptures, you must learn out of Islam’s scabbard.

Now, My Most Gracious Lord President, my time is up. Once I finish translating all the Jewish commentaries on the Old Testament from Aramaic into German, left-handed, the Lord Almighty might see fit to let me write to you again.

Timothy R. Furnish, who has a PhD in Islamic history, is a college prof, author, consultant and a former adviser to U.S. Special Operations Command. Check out his website: https://occidentaljihadist.com/. He is a Lutheran. (And he really likes the Orthodox Church... a lot.)