NY Times slanders Jihad Watch, tries to cover for Minneapolis' Somali community, the 'terrorist recruitment capital of the US'

"More men and boys from a Somali American community in Minneapolis have joined – or attempted to join – a foreign terrorist organization over the last 12 years than any other jurisdiction in the country." 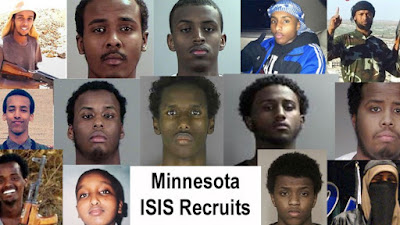 The NY Times just featured an article by Astead W. Herndon, titled, "‘These People Aren’t Coming From Norway’: Refugees in a Minnesota City Face a Backlash," in which the following false and libelous statement is made:

Every weekday, he sits in the same spot at Culver’s restaurant — the corner booth near the Kwik Trip — and begins his daily intake of news from xenophobic and conspiratorial sites, such as JihadWatch.org, and articles with titles like “Lifting the Veil on the ‘Islamophobia’ Hoax.”


Of course, Jihad Watch, run by the indefatigable Robert Spencer (who just survived a serious health incident, and thankfully is returning to top form in writing on and warning about Islam and the global varieties of the jihad threat) is anything but "xenophobic and conspiratorial," with its sober postings of well documented news reports on Muslim jihad plots and terror attacks, and examples of dhimmitude, cover-ups, and willing capitulation by politicians and media before professional Muslim victimhood organizations like CAIR (Council on American Islamic Relations, itself named by the US Dept of Justice an unindicted co-conspirator in the Holy Land Foundation Terror Funding Trial, the largest such terror funding case in history).

But Herndon's piece is too busy painting ordinary Americans as bigots afraid of immigrants, reactionary adherents to "white replacement" theory to present the full picture. Take this section:

Their [the Somali refugees] increased presence — and an attack at a mall in 2016, when Dahir Adan, a Somali-American refugee living in St. Cloud, stabbed 10 people — has emboldened a loosely connected network of white, anti-immigration activists who are trying to pressure local and state Republicans to embrace an increasingly explicit anti-Muslim agenda.

Across the state, this network includes conservative radio hosts, think tanks and digital media that focus on anti-refugee news in Minnesota, as well as small community groups like C-Cubed, which repeatedly invite anti-Muslim speakers to town, leading to clashes and protests.


The stabbing attack by Somali refugee Dahir Adan (he can't be Somali-American and be a refugee, can he?) is the only specific news story cited which gives an honest glimpse into the effect mass Muslim immigration is having on Minnesota. The article makes only passing reference to "anti-refugee news" before returning to its narrative, ignoring widespread terrorist recruiting of Somali Muslims as reported in detail  by Hollie McKay of Fox News:

More men and boys from a Somali American community in Minneapolis have joined – or attempted to join – a foreign terrorist organization over the last 12 years than any other jurisdiction in the country.

FBI stats show 45 Somalis left to join the ranks of either the Somalia-based Islamic insurgency al-Shabab, or the Iraq- and Syria-based ISIS combined. And as of 2018, a dozen more had been arrested with the intention of leaving to support ISIS. Both numbers are far higher than those of alleged terrorist wannabes who left or attempted to leave the country from other areas in the country where Muslim refugees have been resettled.

In the case of the Somalis, it's no longer just the men. Early last year, a female was apprehended by authorities on charges of supporting providing material support to Al Qaeda and arson.


McKay's reporting provides hard facts from the FBI itself on the link between Minnesota Muslims and Al Shabaab and ISIS back in Somalia,

With by far the largest Somali American population in the United States - estimates of up to 100,000 - the insular ethnic community in Minnesota offers a rich recruiting ground. Investigators told Fox News that early on, al-Shabab recruiting was almost exclusively word-of-mouth. One family connection to a contact in the terrorist group would be pulled in as a recruit, in a process that was repeated as the ranks of the al-Shabab grew.


The Minneapolis and St Cloud Somali Muslim community has proved to be a ripe target for jihad recruiters, who prey on the Islamic culture's innate distrust of the infidel to motivate a people already predisposed to not assimilate into American culture to join and actively support America's enemies:

"For over a decade, Islamist terror groups have been able to recruit from Minnesota. This is, in part, because Minnesota has a large Muslim population compared to other parts of the U.S,” said Robin Simcox, a terrorism and national security expert at The Heritage Foundation. “However, it is also because there have been small segments of the Somali community there that have struggled to integrate into the U.S. Al-Shabaab and ISIS have exploited this – upon religious, political cultural and identity issues to offer a compelling alternative to Western democracy.”

Josh Lipowsky, Senior Research Analyst at the Counter Extremism Project concurred the immigrant community in Minnesota has proven to be ripe for targeting in recent years by specifically playing into the card of being something of an outsider and that “society has shunned them.”

Local authorities contend it has been challenging for them to penetrate the Somali-American community in Minneapolis, who remain a unique immigrant population that hasn't actively assimilated with the neighboring township. In the neighborhood of Cedar-Riverside, for example, it's possible to go about day-to-day business without ever interacting with a non-Somali.


It would be easy to get the impression that these Somali Muslim jihadi recruits from Minnesota were loners and losers, but as is so often the case with jihad terrorists, a great many were well educated, successful, and, before their betrayal of America, examples of successful immigration:

Most of those alleged to have joined al-Shabab had completed high school, and were either in college, or working in an array of industries as maintenance, security guards and caregivers. Others worked at rental car companies, money-wiring service centers, and in fashion retail.

One such person, Mahmud Said Omar, reportedly left in 2008 and went on to facilitate the conduit for other Minnesota-based recruits and returned to the U.S. a few months later. He was sentenced in 2013 to 20 years behind bars. 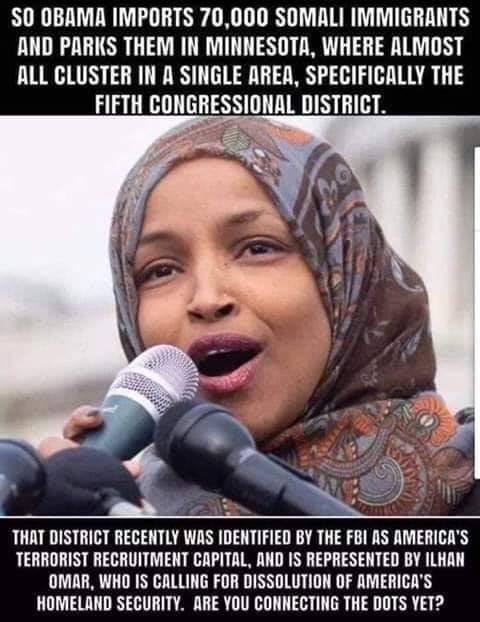 Significantly, it is the mosques in Minnesota which were most effective in turning the Somalis to Islam's jihad doctrine. Because Muhammad was the first and best jihadi, and because his example is deemed the perfect pattern of conduct for Muslims, many Somali Muslims took the Koran at its word and followed Muhammad's example themselves:

Jeanine Brudenell, who formerly served as the Somali liaison for the Minneapolis Police Department, told Fox News much of the extremism that has sparked in recent years – perhaps ironically – stemmed from the crackdown to dismantle local street gangs.

“In trying to lead youth away from joining gangs, many parents were taking their children to the mosques, which deal with everything, including mental health concerns,” she said. She said that opened the way for radicalization.

In one case, Zakaria Maruf, was known for some time as a member of the local Somali Hot Boyz gang. Yet he is reported to have become deeply religious after abandoning the street life,  and around 2008 is alleged to have fled abroad. He was killed in Somalia the following year.


The impact of unchecked Muslim immigration on Minnesota reaches beyond the jihad terror recruitment of the Somali community, and now is a demonstrable threat to ordinary citizens. Minneapolis recently fast-tracked a Somali Muslim onto its police force, bypassing proper procedure and official warnings as to his psychological fitness, in what turned into a deadly mistake. Mohamed Noor was recently convicted of killing an unarmed, innocent woman and sentenced to 12.5 years in prison. Such is the blindness of Minneapolis' city government and police force.

Other news reports out of Minneapolis are equally distressing:


But surely this can't reflect on all Muslims in Minneapolis, can it? These two reports present an ominous look at the views of the average Muslim on the street:


And what is the response of the City of Minneapolis to all this news?

It seems Astead W. Herndon and the NY Times are more than glad to fall in behind the City of Minneapolis and spread their deceptive and slanderous lies about "Islamophobia," while covering up "anti-refugee news" and all the real crimes, jihad recruitment, and terrorism links and funding which flourish in Minnesota.

Blood is on their hands too, not just on the jihadis'.