A young monk, a simple baker, and a pure maiden — each bravely confessing to the death their Orthodox Christian Faith in Jesus Christ — are soon to be formally recognized as saints and martyrs by the Serbian Orthodox Church. 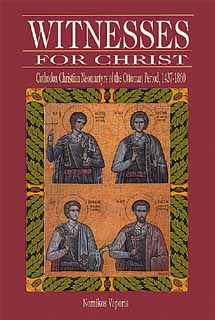 These three — Gregory of Peć, Vasilije of Peć, and Bosiljka Rajičić, who lived during the 17th-18th centuries — are among the "great cloud of witnesses," the thousands of holy neo-martyrs killed by the Muslim Turks during the Ottoman occupation. You can learn about many of them in the landmark book, Witnesses for Christ, Orthodox Christian Neomartyrs of the Ottoman Period, 1437-1860, by Nomikos Michael Vaporis.

The plight of the Holy Neomartyrs under the Ottoman yoke is part of the historical continuity of Muslim persecution of Christians across the centuries from Muhammad's time until now, wherever Islam has conquered. We see the exact same phenomenon in our own day in such geographically far flung nations as Egypt and Indonesia, Nigeria and Malaysia, Pakistan and Sudan, etc. Different languages, different geographies, different politics, yet all these countries are among the worst persecutors of Christians in the world, and they are all Muslim majority countries. In fact, about 80% of the 50 worst countries for persecution of Christians are Muslim.

Two of these accounts also tell of Christian maidens being kidnapped by Muslims, who then tried to force the girls to covert to Islam and marry their captors, a practice sanctioned by Muhammad and the Koran [1], and prevalent today in Egypt, Nigeria, Iraq, and other Muslim countries. 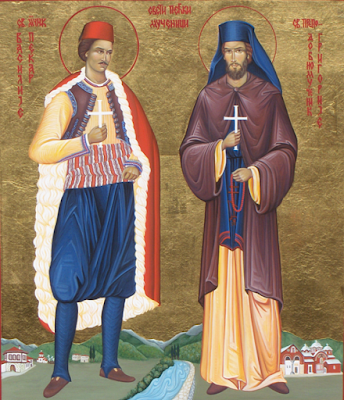 (Belgrade) At its latest session, from April 28 to May 10, the Holy Synod of the Serbian Orthodox Church resolved to canonize three holy martyrs among the saints, reports The Union of Orthodox Journalists.

The official canonization of Sts. Gregory of Peć, Vasilije of Peć, and Bosiljka Rajičić and those who suffered with them will soon be held.

St. Gregory of Peć (17th-18th C.) was a young monk of the monastery of the Patriarchate of Peć. He was martyred after refusing to convert to Islam. Miracles began to take place at the place where he was secretly buried by faithful Christians and a small church was later built on the site. Atheist authorities demolished the church and built an institute in the mid-20th century, although the martyr’s incorrupt relics were discovered during the demolishing of the church. His memory will be celebrated on January 22/February 7.

St. Vasilije of Peć (17th C.) worked as a baker in the city of Peć. When Albanians kidnapped his daughter, he resolved to intercede for her honor and besought them not to convert her to Islam. The Albanians thus severely beat him with a scimitar and left him to die. His place of burial was venerated by the Orthodox, who later built a church on the spot, although the Turks soon demolished it. His burial place was finally destroyed during the hostilities in Kosovo and Metohija in 1999. His memory will be celebrated on April 29/May 12. 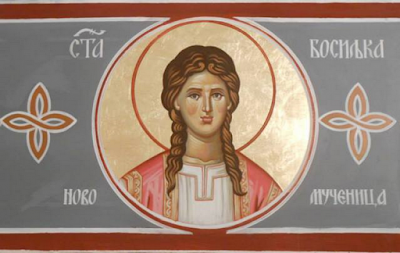 Bosiljka Rajičić (18th C.) was 17 when Albanians kidnapped her. She flatly refused to marry an Albanian and to convert to Islam, and endured all manners of torments. Then she was taken out of the village and torn to pieces, and her relatives were forbidden to bury her remains. Amongst the people, the place of her death became known as “The Girl’s Grave,” and a fresco of her soon appeared in Peć Monastery. Her memory will be celebrated on October 13/26.

The seizure of Infidel girls and their use as sex slaves is sanctioned in the Qur’an. According to Islamic law, Muslim men can take “captives of the right hand” (Qur’an 4:3, 4:24, 33:50). The Qur’an says: “O Prophet! Lo! We have made lawful unto thee thy wives unto whom thou hast paid their dowries, and those whom thy right hand possesseth of those whom Allah hath given thee as spoils of war” (33:50). 4:3 and 4:24 extend this privilege to Muslim men in general. The Qur’an says that a man may have sex with his wives and with these slave girls: “The believers must (eventually) win through, those who humble themselves in their prayers; who avoid vain talk; who are active in deeds of charity; who abstain from sex, except with those joined to them in the marriage bond, or (the captives) whom their right hands possess, for (in their case) they are free from blame.” (Qur’an 23:1-6)

The rape of captive women is also sanctioned in Islamic tradition:

It is also in Islamic law: “When a child or a woman is taken captive, they become slaves by the fact of capture, and the woman’s previous marriage is immediately annulled.” (Umdat al-Salik O9.13)

The same article goes on to quote Muslim clerics and politicians who state that because Muslims now live in an "era of jihad," therefore Muslims can capture Christian women as sex slaves. Just as they did during the Ottoman tyranny.