The recent discovery of of "how an eighth century Koran was found to be written over... the Bible" has been hailed by the media as evidence of "cultural interactions between different religious communities.”

The truth, however, as Raymond Ibrahim proves in his most recent article, is much darker and far more foreboding:

"What is euphemistically referred to as 'cultural interactions between different religious communities' is a reference to the near cultural annihilation of Coptic Christian civilization by Islam. "

A recent article titled “Passages from the Bible discovered behind Qur’an manuscript” is a reminder that for centuries Islam has been literally and figuratively erasing Christianity. 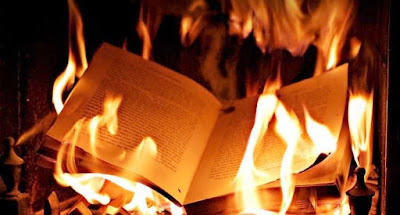 The report tells of how an eighth century Koran was found to be written over a Christian book, possibly the Bible: “French scholar Dr Eléonore Cellard … noticed that, appearing faintly behind the Arabic script, were Coptic letters. She contacted Christie’s [an auction house], and they managed to identify the Coptic text as coming from the Old Testament’s Book of Deuteronomy—part of the Torah and the Christian Old Testament.”

What this means, and how Western scholars understand it, are two different things: “This is a very important discovery for the history of the Qur’an and early Islam,” said Cellard. “We have here a witness of cultural interactions between different religious communities.” Christie’s specialist Romain Pingannaud concurs: “It shows the contact between communities in the first centuries of Islam.”

What is euphemistically referred to as “cultural interactions between different religious communities” and “the contact between communities in the first centuries of Islam” is a reference to the near cultural annihilation of Coptic Christian civilization by Islam on the former’s own homeland.

The closest the report gets to this simple fact is by saying:

Christie’s… believes that the manuscript is likely to have been produced in Egypt, which was home to the Coptic community, at the time of the Arab conquest. It said that the fragments “resonate with the historical reality of religious communities in the Near East and as such are an invaluable survival from the earliest centuries of Islam.”


For an accurate glimpse of this “historical reality,” one need only turn to John of Nikiu, a Coptic bishop and eyewitness of the seventh century Muslim invasion of his Egyptian homeland. He recounts atrocity after atrocity perpetrated by the Muslims against the indigenous Christians, simply because the Muslim invaders deemed “the servants of Christ as enemies of Allah.” His chronicle is so riddled with bloodshed that John simply concludes, “But let us now say no more, for it is impossible to describe the horrors the Muslims committed…”

Once the conquest was over, the “rightly guided caliphs”—Muhammad’s relatives and companions—forced the “milk camels [Egypt’s Christian population] to yield more milk” by squeezing them dry of their wealth and resources, write the Arab chroniclers. Apocalyptic scenes permeate contemporary accounts concerning these times of wholesale extortion followed by starvation: “the dead were cast out into the streets and market-places, like fish which the water throws up on the land, because they found none to bury them; and some of the people devoured human flesh” from starvation, writes the chronicler Severus Ibn al-Muqaffa (d.987).

In short, and to quote nineteen century historian Alfred Butler, “that they [Egyptian Christians] abhorred the religion of Islam is proved by every page of their history.”

The Islamic takeover and financial bleeding of Egypt (documented in my new book, Sword and Scimitar) was always accompanied by a war on Egypt’s Christian heritage and nearly snuffed it out (as it did in other formerly Christian lands, from North Africa to Anatolia).[1] In the eleventh century, Fatimid caliph Hakim bi-amr Allah ordered the destruction of 30,000 churches, including Christendom’s most sacred church, that of the Sepulchre in Jerusalem. Saladin, who overthrew the Fatimids, ordered mud smeared on Egypt’s churches, and their crosses broken off. Then came nearly three centuries under the Mamluks, who were even more repressive than their predecessors. Under their reign, Coptic ceased to be a living language, as the punishment for speaking it included the severing of one’s tongue.

Such is the “cultural interactions between different religious communities” that the scholars are fascinated over.

Erasing a Coptic language Bible and supplanting it with the Arabic Koran is a reminder of Islam’s enforced erasure of all Christian vestiges in Christianity’s ancient heartlands. The more entrenched Islam became in Egypt, the more Coptic culture—from its language to its churches—slowly disappeared, or was rendered invisible through a number of edicts (commonly known as the Conditions of Omar).

Even the already circulating Christian coins that the caliphate appropriated had their crosses effaced so as not to resemble crosses. Islam’s erasure of Christianity in its own homelands continues to this day, including in its war on churches, and in even more subtle ways—such as literally erasing Christianity from the history books.

Yet Christie’s specialist Romain Pingannaud’s claims that the recent eighth century Koran find is “quite extraordinary… It’s fascinating, particularly because it’s the only example where you have an Arabic text on top of a non-Arabic text. And what’s even more fascinating is it is on top of passages from the Old Testament.” The report elaborates by saying that such books (palimpsests) are “extremely rare … with only a handful having been previously recorded, none of which were copied above a Christian text.”

Erasing Christian books of their scriptures and supplanting them with the Arabic Koran was actually par for the course. Dario Fernandez-Morera writes that one celebrated Muslim cleric held “that the sacred books of the defeated Christians must be burned to make them ‘disappear’—unless one can erase their content completely so one can then sell the blank pages to make a profit. But if one cannot sell these erased pages, they must be burned” (The Myth of the Andalusian Paradise, 41).

Happily, and as this recent discovery of a Christian text under the Arabic Koran suggests, sooner or later, everything will be uncovered—including the eyes of Western people to Islam’s past and present.

[1] As Alfred Butler explained “[T]he burdens of the Christians grew heavier in proportion as their numbers lessened [that is, the more Christians converted to Islam, the more the burdens on the remaining few grew]. The wonder, therefore, is not that so many Copts yielded to the current which bore them with sweeping force over to Islam, but that so great a multitude of Christians stood firmly against the stream, nor have all the storms of thirteen centuries moved their faith from the rock of its foundation.”

Ibrahim’s writings, translations, and observations have appeared in a variety of publications, including news, scholarly journals, and popular websites He has contributed chapters to several anthologies and been translated into dozens of languages.
Posted by Zosimas at 8:30 AM