Ramadan Update - The Muslim Sacred Month at a Glance (with links)

The death toll continues to climb as Muslims journey though Islam's month of jihad... 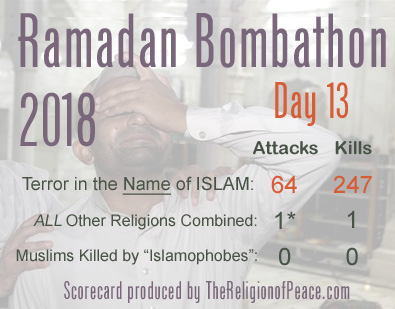 Robert Spencer at Jihad Watch notes wryly of one of these acts that:

[It] brings to mind Barack Obama’s last Ramadan message, from 2016, which said: "For many, this month is an opportunity to focus on reflection and spiritual growth, forgiveness, patience and resilience, compassion for those less fortunate, and unity across communities."


Spencer takes the opportunity to draw a lesson from these Ramadan attacks:


Of course, some will protest that especially suicide bombings and attacks are against the teachings of Religion of Peace. What, have you not read Allah's command?

“Indeed, Allah has purchased from the believers their lives and their properties, for that they will have Paradise. They fight in the cause of Allah, so they kill and are killed.” (Koran 9:111)

Until Christ returns in glory to judge the world, which He may do very soon, the way the world looks now.

More teachable moments from the Muslim holy month follow (just a few highlights, not all 64 so far)...


Links grabbed from The Religion of Peace and Jihad Watch:


2018.05.28 (Nigeria)
Suicide bombers detonate near a rival mosque, taking five others with them.

2018.05.22 (Afghanistan)
Twenty-one people are disintegrated by a massive car bomb at a bus station.