While other countries face “merciless beheadings,” “bombings of churches” and “torching of orphanages,” in the United States Christians face an “equally damaging, yet more hidden” form of religious persecution, warned Cardinal Robert Sarah... 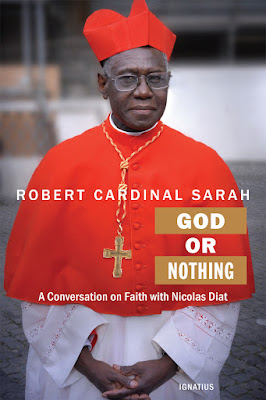 In a scathing address at a prayer breakfast in Washington D.C. this week, a high-ranking Vatican cardinal has denounced an “insidious war” against Christians taking place in the United States under the guise of tolerance.

While other countries face “merciless beheadings,” “bombings of churches” and “torching of orphanages,” in the United States Christians face an “equally damaging, yet more hidden” form of religious persecution, warned Cardinal Robert Sarah, the African prelate serving as the prefect of the Vatican Congregation for Divine Worship.

Sarah (whose name is pronounced Sar-AH and not like the English girl’s name) said that in America, “political leaders, lobby groups and mass media seek to neutralize and depersonalize the conscience of Christians so as to dissolve them in a fluid society without religion and without God.”

By doing this, he said, they are carrying out “the will of the Evil One.”

In delivering his keynote address at the annual National Catholic Prayer Breakfast held in Washington D.C. on Tuesday, the forthright Guinean cardinal—considered by many to be a possible future successor to Pope Francis—pulled no punches in decrying what he called an “insidious war in this great nation of the United States.”

“In the name of ‘tolerance,’” he said, “the Church’s teachings on marriage, sexuality and the human person are dismantled.” As examples of this attack, the cardinal mentioned the “legalization of same-sex marriage, the obligation to accept contraception within health care programs, and even ‘bathroom bills’ that allow men to use the women’s restrooms and locker rooms.”

Sarah said that in our day “we are witnessing the next stage – and the consummation – of the efforts to build a utopian paradise on earth without God.” In this brave, new world, “all manner of immorality is not only accepted and tolerated today in advanced societies, but even promoted as a social good.”

“The result is hostility to Christians, and, increasingly, religious persecution,” he said.

Before a crowd of more than 1,000 people, including numerous Catholic bishops and members of Congress, the Cardinal recalled America’s glorious founding and lamented how far the country had fallen from its original ideals.

“God is named in your founding documents as ‘Creator’ and ‘Supreme Judge’ over individuals and government. The human person endowed with God-given and therefore inalienable rights to ‘life, liberty, and the pursuit of happiness,’” he added.

Now, in your nation, “God is being eroded, eclipsed, liquidated,” he said.

“How low we are sinking for a nation built on a set of moral claims about God, the human person, the meaning of life, and the purpose of society, given by America’s first settlers and founders!” he said.